Heinrich Ignaz Franz Biber was very different from the “common” breed of violin virtuosi, even in his days. As with most famous composers in the period, he was a court composer skilled in the violin and gamba, at Kromeriz in Moravia; and subsequently became Kappellmeister at Salzburg. Regarded as the best violinist of his time, he was in fact more interested in writing for his instrument. Improvising innovative effects on the violin and often employing scordatura, Biber (pictured below) wrote music with religious programmes and also with musical references to Hermetic teachings, an example being his Mystery Sonatas for violin and continuo. 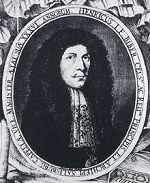 Biber’s music is amazingly different from the more commonly heard baroque style, definitely far more fanciful. The nature of his compositions for violin is essentially extreme improvisation on paper, free and unpredictable explorations of themes or just abstract fantasies which cannot sound any more spontaneous than this. His Eight Sonatas for Violin is in themselves an unstable form, a mixture of formal styles like gigues and sarabandes with sections of virtuosic display intermingled together. Outbursts of notes in an impressive flurry usually serve as a prelude before a theme is led in; the variations thereafter only induce more jaw-dropping pyrotechnics from the violin.

The First Sonata opens with a simple chord from the continuo and over a mysterious sustained note stretched out like a canvas, the violin is given free rein to indulge in the quasi-improvisation play, so mesmerising in its patterns. It is even more fascinating to discover that every single note heard is written down: see to believe! 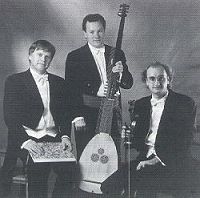 Violinist Andrew Manze is certainly allied with Biber’s style, revelling in the chance to be adventurous with the composer’s blessings. Handling the difficult score with such supreme confidence, and almost relishing the challenge, it is a joy to catch his enthusiasm in the bold and easy way he conveys the music. Manze’s Baroque violin is a far more expressive instrument than the modern one to me, able to bring forth the most biting attack on notes and the most incredible, smoothest runs of notes I have yet heard before; but of course it is all of Manze’s dazzling skills which brings out the best in his instrument. The fearless way he takes off through a haze of notes (sample the Variation in the Third Sonata), his range of dynamics and slides are simply breathtaking.

Each Sonata’s structure is loosely pieced together, and most are actually separated into different tracks with the movements grouped randomly. Nonetheless as a group Romanesca does well in unifying the Sonatas’ various elements together, making sure that the variations does not spin off and goes out of context. Their intuitive ensemble-playing always manages to produce the effective changes of mood where necessary, particularly tricky when the sonatas go on with hardly any pauses. Without doubt praises should be accorded also to Nigel North and John Toll in the continuo for supporting the violin with equally spirited performances; particularly memorable to me was their role in setting up the intense drama in the Fifth Sonata.

The Passagalia for Solo Lute comes as an odd addition to this album. A slow meditative piece on a simple melody derived from the Sixth Sonata, this is hardly heady virtuosic stuff which the original violin part deals with. The Passagalia for Solo Violin is definitely a more fascinating piece in contrast. Opening very gravely with four descending notes, the entire piece repeats this simple tetrachord solemnly with variations of all sorts around it to construct a ten-minute musical architectural wonder. This piece clearly shows Biber’s exceptional skill in extemporising on the violin, the craftmanship of a real violin virtuoso. Andrew Manze makes much of this motif, treating the notes with a ‘swelling’ effect and sustaining the brooding atmosphere for the entire work.

The Sonata “La Pastorella” is a lively and energetic piece of folk dance character. Biber stole the music’s theme from a similarly titled work from his contemporary Heinrich Schmelzer, except that while the latter composed it for a trio, Biber the virtuoso decided to let the violin play doublestops for the same effect on the score. Even more interesting, as the Sonata goes on Biber morphs the theme into a gigue by another contemporary, Jacob Prinner. And finally, when Biber left his court composer post at Kromeriz, Schmelzer was the person recommending Prinner for the job! A act of respect by Biber to his colleagues?

Of the entire set, the gem is surely the Sonata Representativa, a musical adventure which comfirms Biber’s taste for the eccentric. In the Sonata’s movements the sound effects of a nightingale, a cuckoo, frog, cock and hen, quail, cat and a marching band of musketeers are depicted on the violin (strung with only catgut!). The result is far from Saint-Saëns’ Carnival of the Animals but this is by far more ‘realistic’ and definitely an ear-opener.

The nightingale chirps softly and then breaks out into a song, the cuckoo twitters excitedly. The frog belches and croaks, and the cock and hen just makes a loud racket. Manze is amazing at invoking the cat’s meow with exaggerated glissandos that can accurately imitate that distinct cry with a lingering sound. And most spectacular of all is the Musketeer’s March – everyone should be hearing this to realise that the concept of ‘jamming’ on an instrument (like people do in bands nowadays) is not new at all! The Romanesca trio must surely enjoy this piece; showing no mercy to their instruments, judging from the maniacal way they created a furore out of it. Andrew Manze must be a sight to watch, with the endless runs working his flying fingers up and down the fingerboard!

This set of Biber’s Sonatas has been a real education for me, demonstrating the fantastic violin music from the Baroque age. The accomplished writing for the violin here certainly serves to inform us that instrumental virtuosity for it developed very early on, even though it ceased to be of this laissez-faire style from Corelli and Bach onwards. I wonder how much of this music’s success can be attributed to Manze’s excellent performance, but he clearly makes it more mind-boggling for me in realising that a Baroque composer can write for the violin like this – I am certainly excited enough to try his recording of Schmelzer’s works too. By the way this is the only recording of these sonatas, but there is no need for any more when Romanesca have done so well a job here. For fans of Andrew Manze and Romanesca who need no introduction or persuasion, go get it now if you haven’t.

Ong Yong Hui is now living in a real life passagalia of his own, stuck in a cycle of ringing alarm clocks at 5:00am and forced sleep at ten.