Within a few minutes of the start of this tape, we are shown footage from an opera gala in Munich at which Fischer-Dieskau (b.May 28, 1928) is joined by his wife Julia Varady and others for the final fugue from Verdi’s Falstaff. The following day, New Year’s Day 1993, the great baritone decided on his retirement from singing with immediate effect, and this is the starting point for what is more an extended interview than a straight biography, indeed the sort of biographical portrait that used to feature regularly on ITV’s The South Bank Show.

Fischer-Dieskau speaks, naturally enough, in German, but instead of subtitles we have a voice-over in English by the man himself, and until you get used to it the effect is rather like that of a television interview with a foreign dignitary dubbed by an interpreter. Although initially disconcerting, this is soon forgotten amid musings on the art of performing and recollections of partnerships with other great musicians, many of which are illustrated by filmed performances: it is a particular treat to see examples of collaborations with such artists as Richter (Fischer-Dieskau seems in awe, the performances underlining his assertion that he is the real accompanist in such partnerships), Brendel, Fricsay, Bhm, della Casa and of course Gerald Moore (you do have to wait quite a while for Moore, though, and he does not figure as prominently as you might have expected).

The range of material captured on film is extensive but, as the director observes, the actual quantity is small, and astonishingly he had to arrange recitals especially in order to cover essential repertoire not represented by existing footage. This means that there is a strong weighting towards opera and, in terms of Lieder, to performances from the end of the singer’s career.

In fact, in an age when this artist is viewed mainly as an interpreter of the German Lied it is amazing to see just how much work he did in the opera house and in what a bewildering variety of roles: those featured include Don Giovanni and Posa (both in German) the Count in Figaro, Falstaff and Lear as well as others in operas by Berg, Strauss, Wagner, Henze, Verdi and even Puccini. The overall standard is high, but as the extracts are frustratingly brief, the effect is more often tantalising than satisfying, so in the absence of much substantial footage it would have been a good idea to have shown more from some of these, especially the Solti Ring sessions, where he is on fantastic form.

The early opera material shows Fischer-Dieskau to have been a vital stage presence, and even at the end of his career, the voice ragged, he remained a magnetic performer, particularly in Lieder, dramatising words and music like no-one else: he is always fully immersed in the role, something that always marked him out (and not just among Lieder singers) concentration and commitment never lapsing, to the extent that you could say that no Fischer-Dieskau performance is complete without this visual element. Such a pity, then, that the extracts are so short.

The real object of the film, though, as indicated by the title, is to give an impression of the subject today, retired but still active as conductor, teacher and painter, and still obsessive over every interpretative detail, as we see in the rehearsal sequences at home with Varady. Of course, this is not your ordinary retirement: he has given up the singing aspect of his career, but this lends him more time to pursue other interests, one of which is an ambition to conduct Wagner, every note of which, he says, he has in his head. 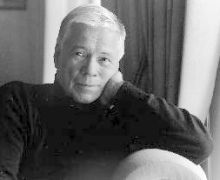 It says much for the man that this lengthy film leaves the viewer with the impression that, so many areas merely touched upon, the surface has been no more than scratched; the director talks in his commentary of ‘the greatest musician among singers’ and, well, it’s hard to argue. True to his reputation, Fischer-Dieskau is reluctant to talk about anything but his work, so you come away after an hour and a half in his company thrilled but not feeling that you know this man any better than you did before.

Above: Photo of DFD by Malcolm Crowthers, from the Hyperion Website.

The remainder of the tape is devoted to a recital recorded in Nuremberg little more than a year before the singer’s retirement, a challenging selection of songs suited to the bass-baritone voice and it is in this register that Fischer-Dieskau is most able to demonstrate what a great interpreter he could be.

The programme is well-chosen and with the addition of Aus Heliopolis II and Geheimes is identical to that issued on Erato in 1995, but the voice is clearly a very tired instrument. This really is for the already converted, and indeed many fans will love it, not least because it manages to convey something of what it was like to be at such a recital: Fischer-Dieskau’s presence is as gripping as ever and both camera work and audience are unobtrusive.

Subtitles would have been helpful as many of the songs are through-composed and are not so familiar (among them are Auf der Donau, Totengrabers Heimweh, Freiwilliges Versinken and Des Sangers Habe). This may have been a deliberate omission on the part of the director to avoid any distraction from the theatrical side of the performance, but if you don’t speak the language, far more is lost than is gained by it. There are no translations in the booklet, either. The pianist is Hartmut Holl, his regular recital partner at the time, who plays attentively and intelligently though without the individuality of the others featured on this tape.

The content of this well-filled cassette (the film portrait alone is over 1 hour 40 mins) although primarily for fans is by no means inaccessible to those wishing to investigate beyond the famous recordings with Gerald Moore, but for devotees this is an essential purchase.

Jonathan Bushrod does the occasional DFD impression during his showers.