by the Inkpot Sibelius NutcaseAnne-Sophie Mutter – the favourite violinst of Deutsche Grammophon (and not to mention Gramophone), the beautiful blonde who gets slimmer and svelt-er with every new DG cover she graces – here performs Sibelius’ Violin Concerto. When I first heard this recording of the concerto, at the time of its release, I was not impressed. For some reason, that sinewy, “bloodless” opening did not appeal to me. This added to my general suspicion regarding the Anne-Sophie-Deutsche-Grammophon relationship (the aforementioned slimming process – compare her old albums) – one of the pioneer ones which saw the pretty bombshell always decorating the cover of the CD, hoping to ensnare the (presumably mostly male) classical CD collector. (Notice that pretty musicians á la Mutter, von Otter, Mullova, the young Argerich, Schwarzkopf, etc. and the numerous “Sony Sopranos” always inevitably get a makeover followed by many appearances on the cover of their albums. Ugly candidates are replaced by 19th century paintings. If the musician is male, to appear on the cover, you must either be 1) handsome, 1a) a countertenor, 2) conduct well, 3) have a really expert photographer who understands “angles”; or 4) sophisticated cameras which distort reality – you know, like how Winword is not WYSIWYG.)(But enough). I learnt my lesson three years after this album was released. Inspired by many favourable comments on her performance, I found a copy at my regular store and took it for a spin. Unlike the last time, I listened to it in full. Here’s what I heard: 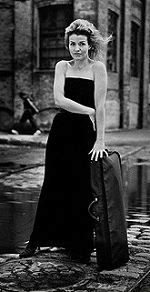 The opening solo, which rises from the quiet darkness, is concentrated, steely, cold and desolate. But it has a sense of purpose. I find that Mutter’s interpretation is distinguished by this – whether it is just the shaping of this solo, or her vision of the entire first movement, every sub-structure (phrase, motif, theme, passage, section, movement) connects. Placed in direct and powerful contrast with the final appearance of that distinctive soaring theme, the final dash towards the end of the first movement is wrought with inevitable finality, majestic in its D-minor vision, white-hot in its energy.Although she sometimes seems a touch distant. Regarding the comment below: yes, there is an element of truth in the suggestion that Mutter’s playing could be seen as “a series of unrelated ideas” because of this sense of distance I do detect. Indeed, if one weren’t concentrating on her playing, this would be most obvious especially in her slow passages. Alternatively, one could even say that her concentration is at fault, being perhaps too deliberate. However, this concentration of playing does not hide the fiery centre that inhabits her performance. This seems to be the case for her rendition of the Adagio. Her cold distance may be thought of as bringing across the snowscape of Sibelius’ homeland – cold and stark on the surface, with the warmth concentrated internally. Whatever the case, whether her “ideas” seem “related” to each other or not is really a very subjective matter. Thus, it is best that the reader listen to the recording for him/herself. My writing this review is mainly to show that my assumptions when I first heard the recording were wrong (to my own ears, of course). All this is not to say Mutter cannot emote – certainly her powerfully carved lines can burn with passion, as in the climax of said Adagio. Her control over her instrument is total, every turn every phrase executed with the understanding that her intention is the equal of her violin’s response. Listen to her pianissimos – searing in the first movement, icily clear in the second.She soars in the manner of Heifetz, often with piercing silvery strength, with that shining tone and impassioned voice-like vibrato; and then there is the sense of mastery through her skilfully chosen rubato, the hushed diminuendo as she slows down… moulding the phrases with moving beauty.
The finale is among the most exciting I’ve ever heard. Some may say the Germans play notes strictly, but Mutter demonstrates here her ability to slide and gliss her notes next to her solidly executed staccati. It may not be to everyone’s taste, but to me it is a refreshing reading. I finally hear the famed Oistrakh harmonic gliss, which few can match, on another recording (i.e. this one) other than one by Oistrakh (best heard in the Sony Essential Classics reissue SBK47659). Couple this with her unstoppable momentum and her 100% intonation, the finale cannot but leap out at you.

The playing of the Dresden State Orchestra is best described next to the superb DG recording (ah yes, one instance when all these “D”s make sense) – crystal clear, finely balanced, always keeping the soloist centrestage, but not too close nor to distant. I have zero complaints here. One third of the CD sleeve notes is devoted to shameless praise of Ms Mutter’s musicianship (“There are no limits to her ability to perform the countless high-wire acts…”), not surprising from DG, one of the most self-praising of labels. Please, let us judge for ourselves. But having said that, I must confess that the writer actually hits true in describing her style and energy, as well as a word we both used, “concentration”. At least the praise is deserved.

Left: Portrait of Sibelius (1892) by Eero Järnefelt Coupled with the Concerto are the two Serenades for violin and orchestra. Charming but atmospherically deceptive in the Sibelian vein, they alternate in aurora-like fashion between pastoral charm and underlying darkness. Serenade No.1, completed in 1912, is in D (major). In these performers’ hands, it is sometimes sweet, sometimes seeming to hide something. Mutter’s “distance” prevents this piece (and the next two) from becoming mere pastoral melody; instilling it with a nonchalant air of cold beauty. It is perhaps true that some listeners will find this distance irritatingly uninvolving, but somehow it seemed appropriate that the music suggests something hidden. Her violin virtually smiles at you with a twinkle in her eye. The effect can be pretty seductive… Serenade No.2, composed in 1913, is in G (minor). Now it starts with a forlorn song for solo violin supported with Sibelius’ characteristic calm lake of string harmonies and soft timpani. Mutter’s song yearns, then steels itself with shining light, then laments. Before long, the soloist leads us into a brief dance, reminiscent of the Concerto’s finale as well as the galloping figure from the tone poem Night-Ride and Sunrise. In another violinist’s hands, I can imagine this piece can be very easily made boring – but not here: Mutter’s sense of purpose pervades nicely throughout.The opening of the Humoresque No.1 (in D minor, like the Concerto) immediately shows Mutter’s appreciation of the Sibelian idiom, with her slightly reticent, distant entry befitting the music, followed by passages of vigorous yet playful music, made both charming and understatedly mischievious by Mutter. All ends quite suddenly.A bit too sudden – another 30 minutes of music would easily fit into the CD. Why deny us the other five Humoresques? What a waste, for the complete set is a small but valuable treasure chest of music, particularly No.6 – my favourite – with its light combination danse macabre-Valse triste. It would have been sheer seduction to hear Ms Mutter play it. If I had the opportunity I would have also asked her to record the Rakastava Suite as well…The Inkpot Sibelius Nutcase is pretty nifty with a camera. Especially group photos and scenery.