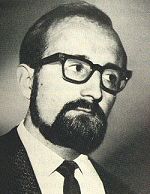 
I am not interested in sound for its own sake and never have been . Anyone can make a sound: a composer, if he be a composer at all, must fashion it into an aesthetically satisfying experience.

From the instance one hears the opening bars of both violin concertos, it is not difficult to understand where Pendericki gets his inspiration. While I have often hypothesized that most composers write because they are inspired, others like Pendericki give you that immediate impression that his music comes from a deep insight into the pain and torture he had witnessed and suffered as a boy during World War II.

The sight of Jews, being rounded up by German soldiers in Warsaw was Pendericki’s early focus on the subject of oppression. Torn between his mother’s wish for him to be a priest (I suppose Catholic, being of Polish origin) and his father’s ambition of his son’s artistic career, Pendericki somehow moved along the lines of the latter.

His intimate knowledge of the violin stems from a profound knowledge of the violin family. His other principal works include Strophes (1959), a 7-minute orchestral piece, works of great magnitude like From the Psalms of David (1958, a piece for mixed chorus and chamber ensemble), Emanations for two string orchestras (1958), Threnody for the Victims of Hiroshima (1960) and not forgetting the St. Luke Passion (1965-6). (Hey he must have had some inclination towards the priesthood). The Psalms of David have similar inclinations to Stravinsky’s Symphony of Psalms with its obsessive chant-like choral writing.

When the reviewer Frank Howe wrote in 1963 about the Threnody, he remarked that “the composer had called on his string players to do everything with their instruments short of play them”. It was his refusal to admit a difference between the two that led him to develop a whole sophisticated new range of playing techniques including hitting, tapping, scraping and sliding. It is often said that Pendericki’s consonance has gotten him into trouble even with the modernist’s idea of dissonance – even his “normal” music confounds and shocks listeners. 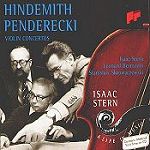 Violin Concerto No.1 (1976) Played and premiered by the dedicatee, Isaac Stern. With the Minnesota Orchestra under Stanislaw Skrowaczewski.

I have to start off with a warning: these two concertos seem to me like the epitome of pain. I for one tend to get visual pictures of a psychiatric patient lost in the city not knowing where he is and everyone seems to be shunning the person upon his approach. The Violin Concerto No.1 was written in 1976. There are not just flashes of sorrow but it seems that the first three movements (played continuously) have all the makings of total depression.

Pendericki directs the upper registers of the strings to correspond with the pounding of the bass drum, followed by a streaky clarinet solo. Then, recurring single chords played by strings are echoed by the bass drum. This returns not only once but sometimes several times continuously, never allowing the music to escape the torment.

The technical wizardry of Issac Stern is never in doubt – remember this recording was made 22 years ago, when he was at his peak as a violin virtuoso. Pendericki had already composed the Capriccio for Violin and Orchestra then, a hommage to the Paganini tradition. The sleeve notes describe the pervasion “of a dirge-like motif solemnly beaten by timpani, bass drum or a union of the two”, “its mood is tragic, its hues dark, stressing low strings or a grave choir of brass”.

There are many points where you get this total smashing of brooding chords from the brass and woodwinds clashing before a violin solo. Pendericki also uses the effects of bowing on a single string from the top of the bow to the bottom of the bow and back again all on the same note. This is a truly haunting experience. In fact the concerto ends that way, leaving you in a limbo, uncertain if it has ended at all. In fact the five movements do not have clear demarcations and since the dissonance forms part of the whole concerto, one finds it difficult to point out where one movement ends or another begins.

Anne-Sophie Mutter takes on the Second Concerto, “Metamorphosen“, some 22 years later. This time the work is accepted by the music world with slightly greater ease than the first concerto. Mutter left me with a strong impression when I saw her “live” performing the Franck Violin Sonata. Here, she (who already has had other works dedicated to her, such as the Rihm concerto) takes on the challenge and comes out totally on top. Her technique is flawless, her phrasing astute

This time around I find that Pendericki calls for Mutter to look more introspectively, which she does with heightened sensitivity. While one might expect some “femininity” in her playing, I have to warn you that once again, this concerto is for the listener who enjoys technically difficult and dissonant sounds, so don’t be disappointed. The percussion section of triangles, bells and celeste set the stage for an ominous presence when it hands the stage to the violin. Markings are rather erratic, with vivace sections just disappearing into sombre silence as we are taken to dramatic stops in the form of sudden thumping of bells.

This haunting experience does grow on you. I have to admit that I would like to watch Mutter snap a string or hair from her bow. Watch out for the fifth movement, Vivacissimo, with its harmonics, glissandi and as the sleeve describe it: “knuckle-breaking intervallic leaps”. Pendericki’s attention to detail will definitely deter many a great violinists away for its extreme near-impossible feats. While it would be hard to make a comparison on how difficult this work is in comparison to other difficult works like, say Paganini’s Sixth Violin Concerto or the Sibelius Violin Concerto or even the Shostakovich First, I think the reputation of this violin concerto will definitely be as one of the most fearsomely difficult of concertos in the violin repertoire.

The concerto ends on a rather distant note, diminishing into the silence. The notes in the sleeve state that “beneath the final bar of the score stand the words “Krakow, Easter Saturday 1995.” I suppose the true Polish spirit and nostalgia still loom in the mind of Pendericki, and I can only guess his fondness for Krakow – the only place spared during World War II.

Johann D’Souza enjoys watching people, especially if they have piranha jaws. He often wonders how an orthodontist would fix such a problem.