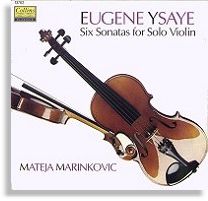 It is sad that the great violinist Eugene Ysaÿe is mostly forgotten today; people acquainted with violin music speak of Wieniawksi and Vieuxtemps and their works, yet Ysaÿe is unjustly neglected. Being the student of these two virtuoso violinist-composers, he certainly should be mentioned in the same breath! Ysaÿe had one of the most powerful violin sounds ever known and was regarded as one of the greatest violinists in his day. He garnered respect from everyone, and it is common knowledge that César Franck’s popular Sonata, Chausson’s Poeme, the String Quartets of Debussy, d’Indy and Saint-Saëns are all dedicated to him. 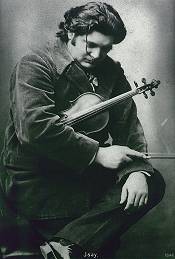 Never having studied formal composition, Ysaÿe was still able to produce music of great quality such as the various Poems for violin and orchestra and the Six Sonatas for solo violin. A musical talent who admired ideas of composers from Strauss to Bartók, his compositional style is wholly original despite his influences. It is both very modern and violinistic, very unique and which progresses far from his teachers’ idiom.

In a burst of inspiration after a Joseph Szigeti Bach recital, he sketched out the entire Solo Violin Sonatas by the next day. The range of style and expression, the ideas presented are amazingly diverse in the series. The First and the Fourth sonata have a definite Neo-baroque element, the Second deals with Ysaÿe’s Dies Irae-theme fixation and also dedicatee Jacques Thibaud’s obsession with the Prelude from Bach’s E major Partita. Spaniard Manuel Quiroga is given a Sonata which I likened to Spanish-flavoured Wieniawski with a modern edge, and Romanian Georges Enesco a fiery caprice full of gypsy temperaments. Such diversity in music written by a performing violinist! Needless to say, as befit works from an oustanding violinist for equally outstanding colleagues, these pieces are also double as études requiring a monstrous technique to bring off.

The number of recordings of Ysaÿe’s Six Sonatas lags far behind Bach’s Sonatas and Partitas. It is strange that modern superstar violin virtuosos like Perlman, Mutter and Shaham all have yet to record them. Only a few much less famous violinists have recorded them. It is quite a shame, for these Sonatas present an ultimate challenge to the performer, formidable in the score and also challenging to the artistry of the musician. For this music is truly “violinistic” – “pour Violon” in Ysaÿe’s own words, even more so than Bach’s Sonatas and Partitas. Ysaÿe lived and breathed the violin, believed that it “has at one and the same time a soul and a mind” (from CD notes), and truly touches the heart of the violin’s soul. Thus the test is for the performer to show an understanding of both the violinistic elements in the piece and to express fully Ysaÿe’s modernistic style at the same time.

Mateja Marinkovic, a professor of London’s Guildhall School of Music, managed to give just such a convincing interpretation of these works here. I am disposed to say this will be one of the best recordings ever. His technique is so secure, with sharp intonation, brilliant sound, extreme dynamic range, that the playing is almost (dare I say?) perfection itself! The Third Sonata “Ballade” is a great example of how well he can tackle the jaw-dropping technical demands, playing so adventurously and using his virtuosity as a means of giving imagination to the playing. The drama and urgency is always there, sustained throughout the shifts between dynamics and emotional extremes. Experience the tremendous buildup of power and final dash to the explosive conclusion; no other performance can leave me as breathless with this piece after hearing Marinkovic.

Even more important than the necessary technique is the sensitivity that Marinkovic demonstrates. The evidence is collectively in every nuance of his playing, particularly his treatment of the music without excessive rubato, vibrato or sentimentality in accordance with Ysaÿe’s forthright modernism. It is striking the way he highlights the Dies Irae theme in every movement of the Second Sonata to show the work’s unity by the motif; forcefully emphasizing it among the cross-string arpeggios of the virtuosic Obsession: Prelude movement, and then in contrast playing the theme with utmost solemnity in the faintest breath in Malinconia. Everything from tempo to phrase-shaping just feels so ‘correct’ with Marinkovic’s interpretation. 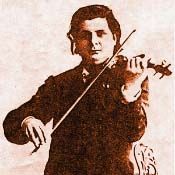 Ysaÿe’s Sonatas are certainly not as approachable as Bach’s and can be as hard for the listener as well as to the performer. A bad performance of these Sonatas can sound very unpleasant or vulgar, with all the trademark piercing notes and crashing chords of the modern violin music stereotype. This definite recording however shows that despite the modern language and the violinistic idiom, Ysaÿe can still convey music as eloquent and touching. Look to the gentle thoughtful playing of the Sarabande in the Second Sonata – as warm and genuinely human as Bach is.

That is what Ysaÿe ultimately meant – invariably all violinists are affected by the Baroque Master’s great Sonatas and Partitas. In hommage to Bach, Ysaÿe own Sonatas are equally competent in every aspect, and should deserve more attention from violinists. Anyway, until that day comes, do not hesitate to get this excellent recording – Collins Classics has shut down their operations from early 1999.

Violinists may give up in front of a Ysaÿe score; Ong Yong Hui gives up at the three octave G major scale.