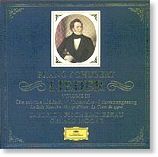 A classic version from the great man, beautifully recorded and my own favourite among these recordings. Moore’s piano playing is intelligent, sensitive and full of character, while the singer, though a baritone, has a suitably light tone.

This is one of the most moving of all recordings of this work. Fischer-Dieskau sounds too worldly to be a young miller, and injects too much angst for some, but it is impossible not to be drawn into such a magnetic performance, he and Moore creating a compelling interior drama with the utmost conviction, their sensitivity to rhythm and to the meaning of the words matchless. This or that detail may seem a little overdone, but the performances of the last three songs in particular are uniquely affecting. It is available as part of a three-disc set with classic recordings of Winterreise and Schwanengesang as above or separately, at mid-price (or budget in some places), but unfortunately without the texts (see below). 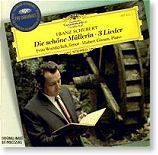 Another classic, and in terms of quality of voice, in a class of its own. Wunderlich has a fine sound for Lieder and sings impeccably in this his second recording of the work, but you may find him just a bit superficial, and Giesen’s piano playing is hardly the most imaginative on offer. The tenor’s tone is famously golden and his technique effortless, the envy of all other singers, so it is worth hearing for the incomparable singing and refined phrasing. Not to everyone’s taste, it is nevertheless very well recorded and if you must have a tenor version, this is a good choice at mid-price. 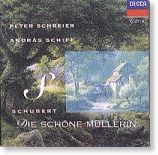 Destined to become as much of a classic as those above, these two artists bring a wealth of experience and the performance has a tremendously natural feel. Schreier’s phrasing is as to the manor born, and Schiff, an expert chamber player as well as a top soloist, responds with the most lyrical piano playing you are likely to hear in this cycle. Schreier’s attention to the meaning of the words is as close as Fischer-Dieskau’s, but he always ensures that there is a healthy flow to the vocal line, words and music going hand in hand, as they should in Lieder. There is a slight artificiality in the way the performers are set apart in the aural picture, but that is not a serious concern when the performance is as good as this. 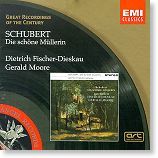 Earlier than their recording listed above, and equally fine, but perhaps just a touch more spontaneous and fresh sounding, with both performers on top form. The disc includes Fischer-Dieskau reading the prologue and epilogue that Schubert discarded, which though interesting is really unnecessary, but you can easily programme it out, and it doesn’t distract from the fact that this is a great recording that should be on everyone’s shopping list, and unlike a few other EMI Great Recordings of the Century is fully worthy of that tag.

The ideal way to be introduced to this cycle. The tenor sings with tremendous feeling and Johnson supports him with great intelligence. The pianist’s own extensive notes are as illuminating and moving as the performance itself, and Fischer-Dieskau, apparently having been approached for Hyperion’s project before he announced his retirement as a singer, still manages to play a part, reading as in the above EMI recording the discarded material, this time including all the poems that the composer did not set. Again, this is interesting, but not for repeated listening. Bostridge’s contribution is top-notch, his reedy tenor sounding appropriately youthful and agile, the pianist providing his usual thoughtful and full-toned finger-work in a resonant but clear acoustic. One or two of the performances come across as a little careful, but the whole enterprise is carried through with such commitment to the cause that to criticise further would be churlish. An award winning disc, and rightly so.