It is surprising that in the later years of his life, much of Liszt’s virtuosity was treated with great contempt. “Do you think I care how fast you play octaves?” he once thundered at an unfortunate student who showed an aptitude for flamboyance. This outburst could have stemmed perhaps from the self-castigation of his own guilty recollection of his early days as a travelling virtuoso. There is also a rather amusing quotation in a letter Liszt wrote at the end of his life. He must have been really fed-up: 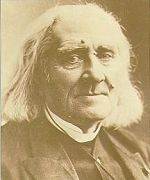 The Transcendental Études have been called a set of studies dedicated to his teacher Karl Czerny (1791-1857). Czerny not only put Liszt through the rigours of technical study but also influenced his thinking while allowing him to shape his own thought and understanding of music and life in general. These studies should not be taken as separate entities but constitute one whole work. They are similar to the set of Chopin’s 24 Preludes. While both these works are often played in parts of a few at a time like the Richter collections listed above, I strongly feel that the intentions of the composer have to be taken into consideration. For Chopin, the Preludes were based in every possible key – therefore it would only be right to pay justice by playing (or buying) the whole set. Unless one just has a preference for works in a particular key. The sheer beauty of a piece is, however, only seen against a back-drop of the whole set, when every single piece is understood.

For example No.4: Mazeppa, a display of Liszt’s graphic violence. Originally published separately in 1847, the piece was inspired by the legendary Mazeppa, a Ukrainian nobleman caught in an amorous encounter with a count’s wife. As punishment, he is tied naked to a wild horse which is then driven into the night. The piece accelerates in tempo, perhaps imitating the galloping horse, which eventually collapses (and it is often noted that Mazeppa caused the collapse of more than just horses – hmm, he must have been a big guy like myself). Mazeppa is rescued and made leader of the Ukrainian Cossacks, eventually himself leading a revolution against his tormentors. 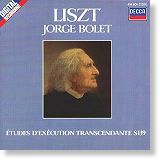 BOLET’S display in his 1986 Decca recording shows his mastery of the pedal which gives it strength especially at the end. Berezovsky with his youthful vigour has speed in his hands and his descents are taken at extreme speed and power – one can perhaps imagine the attack of the Cossack armies in real life. There is even a section of galloping chords, ascending and descending, as if the horse mentioned is galloping, and then an abrupt silence – perhaps the collapse. (This is purely left to your imagination – I was actually imagining Mazeppa and the count’s wife…[sorry, censored]). 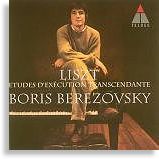 No.5, Feux follets (“Will-o’-the-wisps”), is equally hair-raising in its dramatic impact, forged with awesome technical difficulty. No.6, Vision, sees the pianist pole-vaulting across the piano with its arpeggio chords (something which must be seen to be truly believed). This is where you will understand why the word “transcendental” is truly appropriate to the music. Berezovsky is at his zenith in this piece (the virtuoso-giant few can match). His legato chords are infused with colour – pay attention to the gradual crescendo from pp to ff, the ending performed with great panache. However it is Jorge Bolet (1914-1990) who has the pathos few can match. He plays with great magnificence in the first three pages, with great concentration in the left hand. Bolet provides a build-up which few modern pianists can emulate. I suppose this is something that he took with him to his grave.Although very long at about 10 minutes, the Ricordanza (“Memory”) has nevertheless great charm of the Chopinesque, nostalgic kind, which led Busoni to liken it to a bundle of faded love-letters. (Words and love just fading, fading… fading… … fading… … away) .Harmonies du soir is a calm work that already seems to show traces of Impressionism. It is among the finest and most forward-looking of the Etudes. It is not difficult to see what technical purpose Liszt had in mind in this Study, with its judicious and imaginative use of pedaling. There is an unmistakable glimmer of Debussy. Richter shines here as well as Bolet. The upper registers have to be clearly defined to avoid smudginess – both pianist do very effectively but also give strength to their chords. 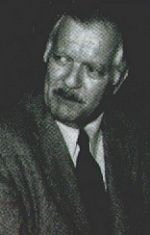 The last in the set is the Chasse-neige (“Snowplough”), which can be viewed as the greatest of Studies. It is unique in its mood of desolation – it has been poetically described as snow-flakes gradually covering and burying the whole world. A study of nature at her most merciless. But for those who look upon Liszt as a mountebank, as someone who writes “for effect”, I would recommend a glance at the end of the B minor Sonata and B minor Ballade. It is interesting to note that Bolet (right) takes this piece at a fuller 6’07” while Berezovsky takes it at a hurried 4’50”, more than a full minute shorter. I tend to prefer the former’s account as it leaves the storm, with its remote thunder and distant flashes, fading away into the distance.For those who love virtuosity with insightful piano-playing, I would recommend both the Bolet and Berezovsky discs, while not forgetting the legendary Richter and his recordings. Although one pianist that has given us a whole vault of Liszt is that of Alfred Brendel, he has somehow not yet recorded this set of studies. I hope that he will one day play these pieces and I look forward to hearing him. After all, as someone said, “Anything that Brendel records should be listened to, be it Bartok or Schoenberg”
Johann D’Souza still insists that he is a thin guy trapped in a fat body – “I want to break free…”