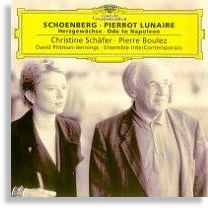 Ode to Napoleon Buonaparte, op.41 (1943)
Declamation of the poem by Lord Byron, for speaker, string quartet and piano 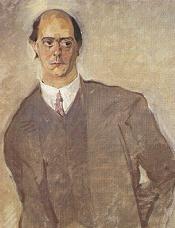 The Austrian composer Arnold Schoenberg (right) was steeped in the Germanic musical traditions that he inherited from Wagner and, to a lesser degree, Brahms, but Wagner and Liszt had expanded the boundaries of conventional harmony to such an extent that by the end of the 19th century composers were mining an overworked seam in their efforts to find something new to say, so Schoenberg was left with a problem: how could he continue his beloved tradition in the knowledge that it was a spent force? The most common solutions among radical composers were to either use an increasingly large canvas, as with Gustav Mahler, or make the harmony more and more densely chromatic, as did Schoenberg’s teacher Alexander Zemlinsky.

Schoenberg tried both methods, and with some success, but he realised that there was only limited mileage in them, so from 1908 he began experimenting with freer tonality. Some eight years before writing his first entirely ‘serial’ work (i.e. using the ‘twelve-note system’ that became known, to Schoenberg’s annoyance, as ‘atonality’) the composer found a truly original voice in the unclassifiable Pierrot Lunaire, a monodrama without narrative, based on translations of 21 poems by the Belgian writer Albert Giraud. Taking note of Debussy’s free sense of form and attention to instrumental colour, Schoenberg wrote his very own Rite of Spring, a singular masterpiece which, however ground-breaking, stands alone as the beginning and end of a phase in his development.

Pierrot Lunaire
Pierrot Lunaire (“Pierrot in the Moonlight”, or “Moonstruck Pierrot) consists of three groups of seven poems each, each poem being of two four-line verses followed by a five-line verse, and each begins and ends with the same line. As the excellent notes for this recording tell us, Schoenberg here plays puppeteer, presenting through Pierrot (a traditionally love-sick and petulant character from European theatre) an array of contradictions: the instrumentalists are soloists and orchestra at the same time. Pierrot is both hero and fool, acting in a drama that is also a concert piece, performing cabaret as high art and vice versa, and doing it with song that is also speech.

The latter is one of the most famous things about Pierrot Lunaire: the use of sprechgesang (literally ‘speech-song’, a means of dramatic declamation first used in German opera at the end of the 19th century) allows Schoenberg to veer freely from song and speech and it does at first sound very strange, but it is easily understood if you follow the translation.

Schoenberg receives a lot of flak for being ‘difficult’, but this recording brings out not only the originality and darkness but also the beauty of the score. The composer Pierre Boulez, with decades of experience in this work and mindful of its ironic tone, maintains an elegant balance and flow of tempi throughout, but there is a calmness about his approach that sits at odds with the work’s strangeness and theatricality. Crucially, and unlike many performances, he refuses to let the ironic aspect of the score take over, and his poise and attention to detail pay off, bringing light textures throughout. Christine Schfer has a consummate grasp of the technical demands, blending speech and song beautifully, but she does not as yet sound fully inside the role. Another difficulty lies with the sound, which is (characteristically of DG) a bit bright for this music, but that said, there is plenty of fine playing, and if you haven’t previously investigated this enigmatic masterpiece, this is a pretty good way to acquaint yourself with it. 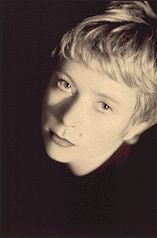 Herzgewachse
This beautiful miniature is rarely performed in concert, probably because of its unusual scoring, and that is a shame. It was written in 1911, about six months before Pierrot, but it deals with a more interior world, being a setting of a love poem by Maeterlinck, whose work had previously provided Schoenberg with inspiration for the large scale symphonic poem based on Pellas et Mlisande. It is an exquisite late Romantic jewel and it receives a ravishing performance here, Schfer (right) on top form in the highest reaches of the soprano register.

Ode to Napoleon Buonaparte
This peculiar work is something of an oddity, even among the music of Schoenberg, who wrote so much that is hard to classify. It is a setting of Byron’s angry diatribe against Napoleon, and owing to the date of composition and the fact that the composer, a Jew, was forced to leave Austria in the thirties, is generally considered to be directed at Hitler. Schoenberg never said as much, and appears to have composed it fairly quickly, so it is tempting to view its dramatic impetus and its intense compression as symptomatic of composition almost at one sitting.

Like Pierrot, it is an example of the use of sprechgesang, and can quite conceivably be performed by an actor, as there is no actual singing; the soloist recites the poem with music performed by a group of string quartet and piano, the vocal part’s rhythm and pitch being notated. The instrumentalists, far from providing a mere background, are an integral part of the drama, which is in the form of a scena with a miniature overture. Boulez’s players have tremendous bite and clarity, and if the soloist were better this would be a dream version, but Pittman-Jennings, like so many singers and despite some pedigree in sprechgesang, is completely at a loss when it comes to the spoken word, and at times sounds ridiculous. Boulez directs with a fine sense of the architecture of the piece, and if you want to know how late Schoenberg should sound, listen to the opening couple of minutes on this recording: all the drama of the piece is thrillingly conveyed in this short burst.

These are valuable recordings, not least because they bring the latest thoughts of a leading composer of the post-war period on one of the century’s greatest classics: the reading of Pierrot Lunaire throws significant new light on a composition which remains full of mystery right at the end of that century, and it is good to see that a rising star of the calibre of Christine Schfer is of a mind to try her hand at such an inscrutable masterpiece. If you are already a fan of Schoenberg and/or Boulez, you will not need a lot of persuading, and Herzgewachse will for many be one of the discoveries of the year, so what are you waiting for? For newcomers, this is a good way to discover this great music, despite the brightness of the recorded sound, so next time you have a bit of spare cash and are wondering what to do with it, give Schoenberg a try.