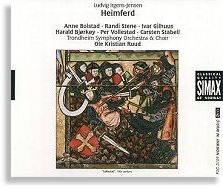 Includes libretto in Norwegian and English.

An Ink-troduction by The Inkpot Sibelius Nutcase

LUDVIG IRGENS-JENSEN never had a composition teacher. Despite that, he wrote a large number of significant songs and choral works, plus chamber pieces. One of Norway’s most important composers at the beginning of the 20th century, he is chiefly known for his orchestral works, such as his Tema convariazioni (1925), the Passacaglia of 1928 and the orchestral suite Partita sinfonica (1939). In case this may suggest a “modernist” composer, I should point out that the oratorio Heimferd displays a Late Romantic disposition carved into Nationalist voice characteristic of this period, and region (Scandinavia). 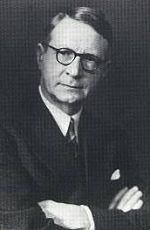 Many of Irgens-Jensen’s works were awarded composition prizes, including the Passacaglia, his Sinfonie in re and the grand oratorio Heimferd itself. In 1945, Norway’s National Assembly (the Storting) bestowed on Irgens-Jensen an honorary income for life – he is only one of six to have ever been thus accoladed.

Listening to the trimphant Heimferd, I can see why the Norwegians feel proud of him. Not only is the title heart-stirring in its own way (“Heimferd” means “Coming Home”), the subject of the work is epic – the commemoration of the 900th anniversary, in 1930, of the death of Norway’s medieval King and Saint Olav II Haraldsson (c.995-1030), and a celebration of the subsequent christening of Norway. This “Dramatic Symphony”, for 11 vocal solo parts, mixed and boys’ choir with orchestra, won first prize in a national competition held in conjunction with the anniversary.

So powerful were the Nationalist sentiments surrounding the work that problems of its premiere arose. The Storting had decided to rename the city of Trondheim as Nidaros, thus reinstating its original title prior to Danish rule. This caused a huge furore on both sides of the controversy. The librettist of Heimferd, Olav Gullvg, who was a champion of the “New Norwegian” language nynorsk (based on old dialects), furiously attacked his opponents. Because of this, many of Trondheim’s inhabitants refused to sing in the premiere of Heimferd, and even more boycotted the entire anniversary festivities, which would have taken place in the city cathedral (the Nidaros Cathedral where the choirs on this record are based).

Nevertheless, Heimferd did receive its first performance (twice) in the anniversary year, near Christmas of 1930. So hugely successful was this premiere that between that December and the following February, eleven “live” performances were held in addition to two radio broadcast performances. Since then, Heimferd has never lost its appeal among the Norwegians and is both known as a national oratorio and “The Olav Oratorio”.

FOR ME, the similarity between Heimferd and Sibelius’ Kullervo cannot be missed, nor is it coincidental. This is not only in terms of the historical or Nationalist circumstances, but in terms of the language of the text. Gullvg’s libretto uses the language of his culture – whereas we find nothing unusual to hear German, Italian or English sung in classical music, the sound of one’s own distinct language (especially when embroiled in a struggle for supremacy and identity) sung to music can be deafeningly inspiring. The libretto of Heimferd also includes quotations from the Icelandic poet-historian Snorri Sturluson (1179-1241), plus a setting of sections of the Latin Mass, albeit abbreviated. This wide expanse of historical time creates an aura in the work both epic and patriotic.

Rising quietly from the black depths of the void, a male chorus with solo tenor and the Priest-Chieftain sing ominously of the misery of the Norse gods in a destroyed world. Together they bemoan the death of Balder, son of Odin, believed to return from the underworld only in a renewed world. This first scene ends, however, in serene optimism, as the Skuld and chorus sing of the ultimate return of life.

The 23-minute second movement, entitled “Kongen” (“The King”) celebrates the triumphant home-coming of King Olav in 1015 from the battlefields (which ranged from Scandinavia to England to Spain). Soloists and choir join to celebrate, as the King greets his “farmers and chieftains/ and all worthy men”. The Bishop bids all to follow the way of Christ, and the Priests sing the Te Deum. Finally, the solo tenor asks whether the “white Christ,/ who comes form the south” is the “Balder whom we lost – /that gentle God?” Naturally, the King answers that Christ is “Mightier than [Thor], /brighter than Balder”. Gullvg’s skill in dealing with the “conversion” aspects of the subject text, “transforming” worship of Balder to worship of Christ, is very impressive, poetically and subtly done.

Left: Detail of King Olav, from the centre of the St. Olav antependium from the Haltlen stave church, 14th century.

The language of Irgens-Jensen’s music is wholly accessible (meaning to say, nothing experimental in the modernist sense). This is not to say it is simplistic, conservative, cheaply romanticised/sentimentalised or uninteresting. In fact, I daresay that it is a more unified work than say, Mendelssohn’s Elijah. For a subject which involves battle, betrayal and death, Heimferd also focuses on an essentially optimistic tone. Perhaps some may find this a waste of the darker parts of the libretto; I myself find it peculiarly well-balanced in conception.

Heimferd‘s Late Romantic voice is very well controlled – at no point did I detect any over-indulgence. Though the notes indicate some influence by Brahms, Reger, Bruckner and Mahler (with reference to Japanese Spring), I find Irgens-Jensen’s music to be much more concise and solid, more purposefully moving, especially with regard to his fine control of the interweaving between soloists, choir and orchestra. His use of the orchestra is likewise very admirable, one that pays full respect to its vocal component. The orchestration surges like a sea or wind beneath the choir, colouring the scenic soundscape, booming quietly in darkness and ominosity, or bellowing mountainously when the choir rises in majestic triumph – as in the final Sanctus of the second movement.

The third and fourth movements, “The Desertion” and “The King in Exile” depicts Olav’s flight to Russia, having been forced out by Canute, King of England and Denmark. Olav laments on his weakness, but is roused by the sight of his kinsmen coming to bring him home. The Shining Elf and Dark Elf converse on the point of struggle, the latter arguing for ultimate oblivion, the former, the “glimmer of hope”. As expected, she gets the last word, and the boys’ choir recalls the tranquility of the Sanctus

Immediately, the title movement “Heimferd” begins. King Olav sets out with his “[h]undreds of horsemen and valiant kingsmen” to regain Norway. A moderately-paced journey is depicted by orchestra with choir, as they ride with increasing confidence homeward bound. The gentle choral description of Norway depicts the King’s nostalgia and hope as he sees his homeland again.

The Battle of Stiklestad of 1030 is one of the most famous in Norwegian history. It was here that Olav’s army was defeated, and the King himself killed amidst reports of miracles. The sixth movement, “Stiklestad”, begins with a wistful setting of the Kyrie eleison and Gloria of the Mass. No misery is heard, but neither is there joy. Instead there is a serene contentment in this beautiful choral section, the layers of voices and orchesta swimming around each other almost blissfully. 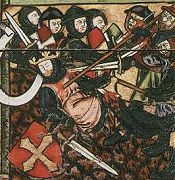 The heroic Bjarkeml (Old Lay of Bjarki) is sung to rouse the army to arms – but all is in vain, as the superior Norwegian peasant and Danish army overwhelms Olav. Significantly, although a solo tenor voice urges Olav to set fire to the peasants’ farms to distract them, the King refuses, for “He who holds open /the pathway to heaven /wants us to triumph /with righteous weapons.” The music rarely reaches a real fortissimo, despite the imagery of battle. In fact, it slowly drains away into silence, as the king breathes his last.

With no break, accompanied by string quartet, the soprano opens the last movement “Postludium”, grieving but singing of the heroic sacrifice of Olav. An orchestral interlude follows, gainly in momentum in an almost fugue-like way; above this the choir eventually enters, joining in Irgens-Jensen’s final tribute to Olav Haraldsson.

THE TRONDHEIM Symphony Orchestra under Ole Kristian Ruud supplies a virtually perfect accompaniment to the singers. As I’ve suggested above, their presence is always felt, colouring the score, but never do they ever go out of place relative to the vocalists. Tone-wise, everyone is surprisingly equal, even the vocal soloists, and effectively so. The choirs, hailing from the Nidaros Cathedral where the celebrations (and I think the original premiere of the piece) were to take place in 1930, are likewise in superb form. The recording, made in 1993 in the Nidaros Cathedral, is clean (surprisingly, no sign of reverb) and serves the huge forces well.

The only problem is with the notes, which although giving adequate information on the composer and the piece, does not elaborate on the history of Olav’s life. Novice to Norwegian history, I was left wondering why after his first home-coming he was thrown out of Norway again in the Desertion and Exile movements – until I dug up the details from an encyclopaedia on my own.

This 2-disc set is also very short at 84 minutes. Couldn’t we have more? Still, I thoroughly enjoyed the music, which is the first I’ve ever heard from this composer. (In fact, I’m still largely unimpressed with Grieg, and find the urge to explore Irgens-Jensen’s music more compelling). If you enjoy choral symphonies of the Romantic/Late Romantic variety, such as Kullervo, and/or involving epic poetry of a semi-mythological character, you can probably do no wrong to invest in this.

Look out for Simax discs at Borders (Wheelock Place) or Tower Records.

The Inkpot Sibelius Nutcase comes home every night at 6:30pm. He chases away those noisy mynahs on his rooftop nest first before pecking at his dinner.