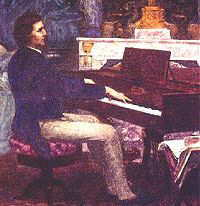 Chopin’s two Piano Concertos were composed in an effort to gain public recognition of his musical talents. Having gained the attention of a small circle of music supporters in Vienna (including Robert Schumann. who hailed him as a genius), Chopin (left) sought to establish himself firmly both as a virtuoso pianist and a serious composer through these two concertos.

The works were rapidly completed consecutively in 1830, although the numbering is reverse of the order of composition. They were given their public premieres in Warsaw and were received with overwhelming acclaim. Greatly encouraged by his success, Chopin returned to Vienna armed with these two works in search of fame and fortune.

On initial appraisal, this CD did not look promising, sporting the names of obscure musicians. However, all doubts were swept away when the music began. Istvan Szekely is a consumate pianist, sincerely communicating the spirit of the first concerto, overcoming the technical challenges of the work with poise and ease. In the slow second movement, Szekely brings out the magic of the Adagio, which Chopin described as “like dreaming in beautiful spring-time by moonlight”. The orchestral accompaniment is highly successful, always aiding the soloist in expressing the emotions of the work, while playing beautifully on its own. This synergistic collaboration is repeated in the second concerto, making this disc an absolute delight to listen to from start to finish.

How does one describe beautiful music? One has to experience it, and this CD is happily inexpensive. Naxos has proven once again that it is not necessary to have brand-name star performers to produce music of the highest quality. This CD poses a direct challenge to other recordings with more well-known musicians, and the verdict is not always in favour of the famous names. I certainly look forward to future recordings by Szekely, and urge anyone who is interested in these two works to pick up this disc pronto. The sound is good, with slight resonance that is typical of Naxos recordings.

This disc is available at, or can be ordered from, Tower (Pacific Plaza), Borders (Wheelock Place), HMV (The Heeren) or Sing Music (Raffles City).