An Introduction
by Derek LimJump to Recommended Recordings

Mahler’s Fifth Symphony is often classed together with his Sixth and Seventh symphony as being a trilogy in the composer’s vast symphonic output. The first four symphonies were openly influenced by the poems from the fascinating anthology Des Knaben Wunderhorn, and are thus commonly classified as the “Wunderhorn” symphonies, which employ the use of the human voice. The Fifth seemed to be a move away from this trend.

Logically and symphonically speaking, it is very difficult to resolve. Divided into three parts, Mahler created a huge structure in this symphony, and a logic which seems open to interpretation, just listening to the music. The first movement, “Trauersmarsch. In Gemessenem Schritt” is an excellent example of Mahler’s inventiveness and the continuity of his symphonic writing. In almost every work that Mahler wrote he quoted himself, whether consciously or not, and here lies an example.

In the labyrinth that is the first movement of his Fourth Symphony, he has the trumpet do an Austrian trumpet call – a triplet followed by a long note. In the first movement of the Fifth he has a solo trumpet – out of more than a hundred orchestra members – play the opening trumpet tattoo. The sheer tension in the orchestra while this happens is unbearable, as they all wait to enter, with that resounding shuddering crash. The imaginatively built movement develops from the single trumpet tattoo theme and is orchestrated in a military sense. The listener gets a sense of the funeral of an important, possibly military person. In style it is a little like Siegfried’s Funeral Music from Wagner’s opera Gtterdmmerung, though without its sense of joy-through-tears which Wagner creates. One day I heard for myself a trumpet call in Singapore’s Military School on the vast assembly ground, and then the Band struck up. Tinny and brassy, garish and banal, it was everything Mahler could have wished for in this movement.

The first movement has a sense of being a prelude – everything an introduction. It has to be taken into consideration together with the second movement. If specific adjectives can be used to compare the two movements, it would be that the first movement is “angry” and “turbulent”, the second (“With greatest vehemence”) “violent” and “plaintive”. The first puts forth questions which it does not answer, and the second doesn’t answer them either. If anything, it seems to continue them – thematically, it is linked with the first – but in sheer structure, and compression of argument it is greater than the first movement.

Towards the last quarter of this movement there occurs an unforgettable moment, marked “Pesante” (heavy). This is when a great chorale theme is sounded by the brass section of the orchestra. Harps play here, forte-fortissimo, doing great glissandi, and the very gates of heaven seem to be opened for a glimpse of what could be. However the movement ends in despair.

The following Scherzo, making up by itself the whole of the second section, is nothing short of monumental. There is nothing in my experience of the symphonic repertoire which is quite like this Scherzo. Certainly in its sheer scale – it lasts 18 minutes – it would qualify as one of the lengthiest Scherzos ever written. It is also one of the most well thought-out pieces that Mahler wrote, and which fully justifies his saying that “there is not a grain of it which is not well-kneaded”.

In style it is very echt-Mahler, and has all the waltzes and Lndlers typical of him. It may seem boring and endless to the listener unfamiliar with it, but to the patient, it offers evocations of mountains, lakes and above all, Vienna, the city which Mahler ruled as conductor of the Staatsoper. The form of the scherzo itself can be compared to the Alps themselves. It is a sort of concertino for horn and orchestra, and requires a very good orchestra, which Mahler indeed had at his quasi-disposal – the Vienna Philharmonic Orchestra.

After all the hecticness of the Scherzo is the Third Part, which starts with the very famous Adagietto. Mahler was a man in love at the time he wrote this symphony, and the famous conductor of the Concertgebouw Orchestra, Wilhelm Mengelberg, said about this very lovely movement that it was a form of proposal from Mahler to his lady, Alma Schindler (left), a very sought after woman at the time, and herself a composer. He wrote this movement towards the end of the year, and soon they announced their engagement. The Adagietto is not without its moments of bitter-sweetness, but it clearly is of love and not of death, though Bernstein conducted it with the New York Philharmonic Orchestra during the funeral ceremony for John F. Kennedy in a performance that was recorded and released on CD recently.

This brings us to the last, rondo-form movement, which is marked “fresh” (“frisch”). Here Mahler returns for a moment to his Wunderhorn Lied “Lob des hohen Verstandes” (“In praise of higher understanding”), a fun but ironic piece where the nightingale and cuckoo seek a donkey to judge the better singer. The nightingale’s more complex melodies goes right over the head of the donkey, who pronounces the cuckoo the winner. The movement is supposed to start attacca, immediately after the fourth movement but is rarely played, or recorded this way. 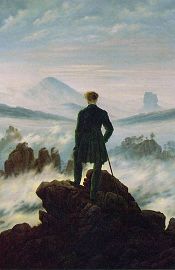 A short introduction leads to the fugue-like main theme of the movement, which is full of fun and carnival-like atmosphere, interspersed with the lovely Adagietto theme, played here at a very fast speed, and totally transformed, and no longer tear-laden. In between the busy fugal episodes the air in this movement is rarified and clear, like fresh spring water. These parts seem to tell the listener to relax, and enjoy the beauty of the sound. Mahler’s master orchestration and development of the rondo leads finally to the great chorale theme first heard in the second movement. This is the psychological climax of the whole work, and also the psychological windup of the symphony. Jubilation is heard here as the movement and the symphony rush headlong to its end.

Herbert von Karajan, though never a very successful Mahler conductor, said once when he was interviewed that when you play through Mahler’s Fifth, you forget that time has passed. In a very real sense, the emotional scope and breath of the work is magnificent. Afterwards one has to learn how to breathe again.

Derek Lim is counting down to his last day of national service – 6 Months. Hallelujah !! (to be sung Messiah-style, with augmented Mahlerian orchestra, 8 horns and 4 choirs, plus children’s chorus.)