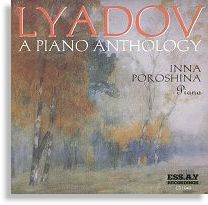 My introduction to the music of Anatol Lyadov were through the three Preludes Op.57 No.1, Op.40 No.2 and Op.39 No.4 played by the 1990 Tchaikovsky prize winner Boris Berezovsky on Teldec (4509-96516-2). These works are all miniatures, and it is surprising to note that all the works on this disc are also miniatures (apparently Lyadov never composed any big-scale piano works). I was pleasantly happy to note that one of his most famous piano works, The Musical Snuffbox is included in the set. (I take this opportunity to also mention Stephen Hough’s newly reissued “The Piano Album” on Virgin Double [5 61498-2] where another composer, Vladimir Ivanovich Rebikov, is represented by a composition of the same title, which is quite similar in character). 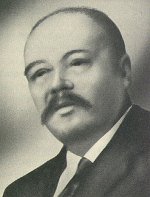 Lyadov (right) is well-known for his laziness: when he was commissioned by the Ballet russes to write music for the ballet The Firebird, he asked for a whole year to do it. The commission was handed over to Stravinsky instead who at that time was relatively unknown. And the rest is history. During his studies at the St. Petersburg Conservatory Lyadov was often absent from class and he was eventually suspended for a while. The tone poem for orchestra Baba-Yaga took him 13 years to complete. Thankfully however, he was much more at ease and efficient with his piano works.

If you are into short works then this is the disc for you. None of the pieces are longer than two minutes, yet because of the diversity of his composition style, one feels as if one is listening to Debussy, Schumann, Liszt, Chopin and Scriabin. One thing I noted with wonder, according to the booklet notes, was the fact that his students were Stravinsky and Prokofiev – yet their compositions took on their own identity, with hardly any likeness to their teacher.

The first set of Mazurkas are so similar in nature to Chopin’s that if one is marginally familiar with the latter’s, one could easily be swayed into thinking that one was in fact listening to Chopin. I for one am gaining more respect for Lyadov as I listened to his works on this disc. A thorough knowledge of Chopin’s works is helpful. Lyadov seems to have managed to capture the dance-like Polish spirit of Chopin in these works. A noted Mazurka in the first set of Mazurkas is Op.42 No.4 in A major “On Polish Themes”. If you are a fan of the Chopin Preludes, the familiarity of spirit here is even more ethereal.

One disappointment with the CD sleeve is the fact that no mention is made to the pianist whatsoever. I can only guess that the pianist is either Polish or Russian and that the name implies a she. Poroshina captures the spirit of this Russian composer very well; I particularly enjoyed her interpretation of the Prelude in B minor Op.11 No.1 and the Prelude on a Russian Theme in A-flat Op. 33 No.1 which somehow leaves you in a lurch at the end of each one wanting more! (Chopin had this ability to do that as well). The pianist’s fluidity in her passage work as seen in the Prelude in G and Prelude in G minor from the set of Op.46 is commendable, although I did find that a greater sense of abandonment could have helped in some of the pieces. Some of her chords in the Preludes could have been held for a moment longer too, in order to produce a stronger tonal depth; and maybe with the slight use of the sostenuto pedal a bit more.

In Biryulki Op.2, which consists of 18 short pieces, the beginning (marked “presto”) has all the characteristics of a Schumann miniature taken from the Carnival. Like Schumann who explores a wide range of tempo from adagio to prestissimo, Lyadov’s markings hover mainly in the faster range. While all the movements are extremely short, Poroshina’s agility and flexibility in the vivace movements capture each of the salient points. However I did not quite take to her rendition of the Barcarolle in F# Op.44 which I somehow felt lacked depth in the chords – they could have been depressed with a bit more strength. Her rendition of the most famous work, The Musical Snuffbox, especially in the opening moments, is very evocative of the dancing ballerina indeed, with staccato notes in the right hand played with grace, charm and a playful gentleness.

The last set of pieces do have a Scriabinish flavour although bordering less on the virtuosity and darker side well-known of that composer. This recital is a good introductory guide to the music of Lyadov and a good disc to add to the growing collection of piano albums featuring music by other relatively unknown Russian composers like Rosvalet, Lympunov and Levitski, all representing virtuostic challenges for the piano.

Johann D’Souza realised that the word “minimalist” has got nothing to do with the amount of hours one practises on the piano to become a great pianist and regrets it dreadfully.