BEETHOVEN‘s very existence fostered the creation of a historical petri dish in which the culture of The Composer grew and flourished.
“On a walk with my father we met a stocky old man with a long gray beard. My father took his hat off to him, and he did likewise to my father. ‘That was Johannes Brahms,’ my father said. ‘He has written beautiful music.’ I turned around and looked after the man, who walked in a very dignified manner.”

Thus wrote Freud’s disciple Theodor Reik, who as a child was, even if only briefly, in the presence of Brahms himself.

Reik lived into the third quarter of the 20th century. Conceptually, there could now be some living centenarian whose grandfather could have known Beethoven, or at least been in his presence and spoken with him. This possibility increases the size and strength of the links in the chain that binds us to the world’s history generally, to European history specifically and to German and Austrian musical history in particular. A pianist alive today who studied with Vianna Da Motta learned from one of Liszt’s own pupils; Liszt studied with Carl Czerny, and Czerny knew Beethoven.

Still, Beethoven’s era is beyond the recall of any living person. Da Motta died in 1948, the last surviving pupil of Liszt (who as a youth had been taken by Czerny to play for Beethoven). The last survivor of those who personally knew Beethoven, Gerhard von Breuning, died in 1892.

WE LIVE in an era where some amazing things are often taken for granted. Reactions depend not only on individual upbringing and circumstances but also on locale. Differences in national outlooks do exist and what’s significant in one country may have little impact in another. In the USA, the mention of George Washington’s name, for example, will more often than not prompt only a disinterested shrug of the shoulders. This isn’t so in Vienna when Beethoven’s name is spoken, and where even now, incredibly, some remnants of his personality still remain – remnants as distinctive as the garments (i.e., remnants) he’s known to have worn.He left a deep mark. With several museums devoted to him, some of which contain his personal effects, there exist in and around Vienna more sites associated with Beethoven than with any other composer who graced the city. Despite the passing of seventeen decades, residual effects of his presence still exist in the city and outlying areas he frequented, such as Heiligenstadt, Baden, and Mdling (now suburbs of Vienna). Indicative of the regard in which he’s still held there so long after his death is that the very mention of his name even today prompts a certain intangible but unmistakable posture, even from store-owners and postal clerks, which bespeaks a palpable degree of reverence. The atmosphere may be impossible to define and difficult to explain, but it’s very easy to recognize. 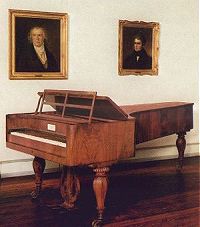 Right: Beethoven’s last piano, made by the Viennese court piano-maker Conrad Graf ca.1823. In the possession of the Beethoven Haus, Bonn, Germany.

TO SAY Beethoven had an arresting personality would be understatement epitomized. That personality was as powerful as his piano-playing and just as unique in his day. A product of The Age of Enlightenment, he personified revolution. Through his free and frequently fierce nature, he wrenched music out of the 18th century and into the next. (Stravinsky performed a comparable historical service a century later). What Beethoven did makes him if not the last of the Classicists (Brahms might claim title) then arguably the first of the Romantics. His adventures in disregarding prescribed 18th-century stricture, structure, requirements and protocol marked his music and his daily life, and in both areas he achieved a virtually complete freedom of expression. He lived before his time in extra-musical ways, as well: some specialists now believe his deafness, at least in its early stages, might today be cured by a relatively simple operation.What Mozart’s nature was to Beethoven’s is comparable to what Beethoven’s early keyboard instruments were to his Broadwood and Graf pianos – and by extension, to what these instruments were to a modern Steinway and Bsendorfer. Figuratively, where Mozart knocked vainly at the door, Beethoven simply kicked it down, triumphantly marched right in, and defiantly made himself comfortable. (And Heaven help those who objected, be they paupers in poverty or princes in palaces).

A NATURE like his is today called insanity in the layman (invariably ignored), eccentricity in the wealthy (invariably encouraged), and artistic temperament in the composer (invariably accepted). His personal conduct could be very embarrassing. He was seen returning to a ballroom still buttoning up his trousers from a lavatory visit. Late in life he spoke of Napoleon, using very explicit language. He once threw a chair at a prince – very determined behavior, considering the nobleman was one of Beethoven’s own patrons and was helping to support the composer financially. His usual disregard of conventional, external considerations often caused friction and conflict with everyone – neighbors, janitors, servants, friends, landlords, waiters, and aristocrats.That Beethoven wasn’t an ideal companion is a matter of record – yet there are some today who, if graced with a time-machine, might sacrifice a limb to spend even a day with him, or a year of life for the chance to hear him play his own music or especially to improvise. His genius separates him from us to the extent that the only things we may have in common with him are human form and a link to music. 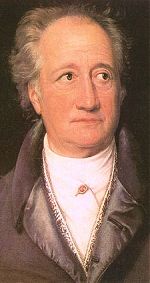 “His talent astonished me, but his is a totally untamed personality, and he is not entirely wrong in finding the world detestable, though this attitude does not make it more pleasant, either for himself or others To think of teaching him would be an insolence even in one with greater insight than mine, for he has the guiding light of genius, whilst the rest of us sit in total darkness, scarcely suspecting the direction from which daylight will break upon us.”

– Johann Wolfgang von Goethe, of his 4-day meeting with Beethoven in July, 1812.

“The Court suits him too much. It is not becoming of a poet.”

– Beethoven, of his meeting with Goethe.

Beethoven was 42, Goethe 63, with the publication of the first part of Faust four years behind him. Of this meeting, the following vignette has come down to us: as Beethoven and Goethe walked, some of the nobility passed with their entourage. Goethe politely stepped aside and bowed deferentially to the nobles – while Beethoven, in a typical gesture, strode almost defiantly right through their midst, with his hands behind his back and without acknowledging the presence of the nobles, who had no alternative but to give him clear passage. When Goethe asked Beethoven how he could so disrespectfully treat these nobles, the composer replied, again characteristically, “There are countless ‘nobles’, but only two of us.”

IN ONE‘s personal relations with him, an honest and direct approach was the only feasible one, as he could be extremely difficult to deal with on a face to face basis. His sense of morality was contradictory in the extreme. Abstractly – in his music – he loved the concept of humanity; practically – in daily life – he disliked most people, especially the aristocracy. “Strength is the morality of the man who stands out from the rest, and it is mine,” he wrote to a friend. He also wrote in his diary, “This I feel and deeply comprehend: Life is not the greatest of blessings, but guilt is the greatest evil.” The words are Schiller’s but the sentiment is Beethoven’s.Perhaps no one in the entire history of music better exemplifies the image of The Absent-Minded Composer than does Beethoven. He would spit into a mirror, thinking it was an open space. He once entered a restaurant, spent hours at the table sketching, lost in thought, and then asked for his bill – without having ordered. When his clothes became impossibly shabby his friends crept into his dwelling one night and substituted new ones. Beethoven never noticed the difference when he dressed the next morning. His doctor called him “a confused guy.” 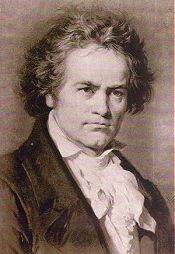 BECAUSE of his notorious, momentary swings of mood one never knew what he’d be like at any given time, and a life riddled with misfortune, malady, and isolating deafness later on did nothing to improve his already volatile disposition.The only thing consistently predictable about Beethoven was his consistent unpredictability. He could be abrupt and unpleasant with friends. He could also be cordial and accommodating with a total stranger who might visit him unannounced, unexpected and uninvited.

It must be remembered that just because he was so far above us in his art doesn’t mean he had to be far above us in general daily virtue. In the right historical context, the reason is valid and clear. Like us, he had a full set of human weaknesses, and his personal frailties make him more, not less, of a human being.