When I first bought this album (then it was still in cassette form), I was still a newbie to classical music and was thus largely unaware of the quality of the performances I was listening to in my walkman almost everyday on my way to college. I loved Rhapsody in Blue for that impressive clarinet smear in the beginning and its snazzy rhythms, An American in Paris for that bluesy trumpet solo, the ultra-fast single note melody of the Piano Concerto, the cool Three Preludes and the wonderfully memorable tunes in Porgy and Bess. I was quite contented with this cassette that I had. Why shouldn’t I be?

Well, as fate goes, I had to start collecting classical CDs and naturally, one of my initial instincts was to buy many different versions of the “Rhapsody”, comparing each piano soloist, each clarinet smear… and even the horn solos in the slow section to find the best rendition. Try as I might (and after spending a lot of money), I could never find one to match this definitive rendition of the “Rhapsody” by Leonard Bernstein (conducting from the piano) and the Columbia Symphony Orchestra.

As it goes, the criticism against the Rhapsody in Blue has always been that it has wonderful melodic material but Gershwin’s development of and the links between the themes are weak. This criticism comes even from Bernstein himself, but so far, I think no one comes closer to delivering this piece of music naturally and as organically as Bernstein. It is this old version of the “Rhapsody” that I hold as the benchmark. Certainly, it is not all perfect, but it sures comes close!

The famous clarinet smear is smooth without a glitch through 1½ octaves, with near perfect pitching. The entire clarinet solo is given a quasi-jazz approach that includes a smear on the second to last note that lends greatly to the mood of nonchalance. It is through this opening section that you know immediately why this “Rhapsody” is “Blue”.

Leonard Bernstein (right: picture from original LP cover) has often been praised for his virtuosity on the piano, but only on very rare occasions are we treated to his playing. This is one of them, when Bernstein’s dazzling pianistic skills share the limelight with his over-hyped “pouncing on the podium”. I’ve heard Howard Shelley, Andrew Litton, Andre Previn (who comes a close second) as well as a whole host of others take on the technically-challenging piano solo in the “Rhapsody” but Bernstein leads the crowd by treading the line of classical virtuosity and the daring jazz piano rolls with equal proficiency and flair. Not to mention the high drama which he infuses with vivid dynamic contrasts and rubatos.

Perhaps it is that he is drawing from his own experiences. Bernstein’s works are also sometimes influenced by many jazz elements even if they tend towards “serious classical music”. Not many performers of yesteryear and today can boast of the same reputation and talent in both concert hall classical and jazz. With this, he alternates the listener between a piano-bar crooner and a concert-hall virtuoso. What differentiates Bernstein’s performance with Previn or Litton is subtlety of emotion. Of course this is not something Bernstein is known for, but truly in his hands, the piano sings the blues.

The Columbia Symphony Orchestra plays with the kind of sharp precision expected of American orchestras but with a warm sound and just enough edge to give the jazzy bits some grit. I can’t imagine leading the orchestra from the piano, but however Bernstein does this, the orchestra does not miss a beat nor any nuance of how Lenny wants it to be.

The essence of the work’s unity lies in the interpretation, the changes in tempo and the careful phrasing of the many melodic ideas. Whatever Gershwin lacked in composition, I think Bernstein made up in interpretation.

From one great performance to another, the album continues with Oscar Levant’s rendition of the Three Preludes, which score another 10 out of 10 on my list. What I find attractive about it is its natural spontaneity and upbeat tempo unrestricted by technique. These short pieces are the only solo piano concert works that Gershwin ever produced. He premiered six Preludes at the Roosevelt Hotel in 1926 but eventually published only three. Prelude No.1 is rhythmically lively (reminiscent of the popular dance rhythms of the roaring 20s), No.2 a serene, blues-like melody and No.3 is like the first, more dance-like in nature. 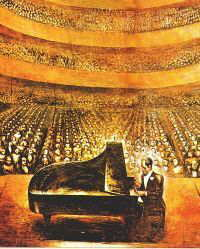 In no way are these pieces easy (except maybe No.2) as I soon found out from some pianistically-inclined friends, especially in the fast tempo that Levant takes the first movement. This results in it sounding a little messy but it preserves the syncopation and feels better than those versions that take a safer, slower speed. Levant’s Nos.2 and 3 are not as outstanding as the First, but shows too a kind of laid-back ease in delivery in contrast to other rather more academic presentations in other releases. Once again, we find a performer who is very comfortable in Gershwin’s medium and who seems to be able to understand the composer’s intentions while others just gloss over them by sticking to the notes. I’ve heard better tone, better technique, better voicing of lines in other renditions but in this one, Levant has got the feel right.

The Concerto in F is arguably Gershwin’s greatest achievement for the concert stage, perhaps surpassed musically only by Porgy and Bess which definitely reflected a deeper side to his art. Compared to the Second Rhapsody, this Concerto shows much more maturity and is certainly more appealing. In this collection, Andre Previn joins Andre Kostelanetz and his Orchestra in the finale, marked “Allegro agitato”. The tension created by a melodic theme consisting mainly of the rapid repetition of one note can be said to brilliant in its own right. This demanding task for the pianist is well-taken by Previn, who is undaunted by the quick tempo. More admirably, Previn’s dramatic reading proves most effective.

The orchestra however, is quite a let down with its “Hollywood”-type sweeping string passages that over-ride everything with a mushy emotiveness that is quite superficial. The recapitulation of Gershwin’s very “romantic” theme from the second movement did not help this at all, giving the orchestra a chance to just waft over it. I think the music deserves more rationality than it is given by the orchestra. Overall, still listenable but certainly needing a lot more thought. 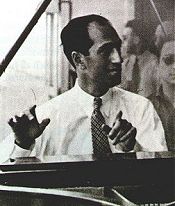 Under the directorship of Eugene Ormandy, the Philadelphia is indeed one of the United States’ premier orchestras. With its matured sound, no doubt bright like most American orchestras, it is toned to sound brilliant in Bach transcriptions, Strauss’ waltzes and even in this more jazzy idiom. I’ve always admired Ormandy’s work and feel that he is under-rated. Though, I will not hold that this is some of his best, he certainly lends his superb sense of musicality here to make An American in Paris memorable.

Picking up the tempo to just a tad faster than most right from the beginning, Ormandy launches the listener into a scherzo-like feel, playful and wistful. His American in Paris is certainly more bold than pensive. Car horns do not quite follow the rhythm and tempo. The trumpet solo picks up from this more humorous and witty tone rather than the usual “lazy” sound that some try to do. Ormandy opts for a swing feel in the more upbeat trumpet solo that follows, but reverts to straight quavers in the tutti recap of the melody. This sounds strange and I think is the one rather odd choice in the entire piece. I guess it is a solution as to whether to swing it or not, a melody that begs to be swung but I think one way or the other would be better, not alternating between the two.

What really steals the show towards the end of the work is the strings who play with great sensitivity and with beautiful tone. There is a single cello (or is it a viola?) solo that makes its entrance so beautifully that I have often mistaken it for a human voice though I know full well that there are no voices in the work. The triumphant finale that recapitulates the blues trumpet melody is grand without being too obtrusive. As always, Gershwin ends his work with a “subito piano” section, here with the horn section reiterating a part of the slow theme again. This could perhaps be raised as a signature in Gershwin’s concert music.

In this fantastic arragement by Robert Russell Bennett, many songs from Porgy and Bess are given a new sound for the concert stage. Judging by the number of times this arrangement has been chosen over Gershwin’s Catfish Row, I dare say that it is certainly a more entertaining work to listen to by far. As I found out from the SSO’s performance of it (reviewed here), it can tend towards being draggy and thus, I appreciate Ormandy’s selection of a few songs from the entire arrangement, which fairly represent Porgy and Bess as a whole.

The bell-like opening of the piece with a cello introducing “Summertime” is one of the achievments in this arrangement and here, it is beautifully taken. The tutti string entry with the main melody could have been more hushed though. “I got plenty of nuthin” was described by Gershwin himself as a “banjo song” and surely enough, this arrangement features a solo banjo. The lilting “Bess, you is my woman now” is given more propulsion with good reason, yet losing none of its attractiveness. What I particularly enjoy is the rousing “Oh Lawd, I’m on my way” which creates a semi-optimistic atmosphere at the end of the opera – it achieves its effect to its fullest here. The Philadelphia brass add their majesty without disrupting the soaring string lines in a way that fully projects this optimistic view of life Porgy embraces, as he leaves to search for his Bess in America. 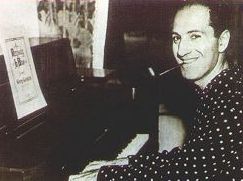 With a selection of music this attractive, good recording and nice price, I think this album should be in every collector’s shelf. Do not be deceived by its boring, plain grey cover… the music contained therein is far from grey. This I can safely say about the CBS “Greatest Hits” series that I have so far. The only bad thing is that some of these snippets come only as a part of the whole thing, forcing you to hunt down the rest of it in a separate record. Take the series as a sampler if you will but this one CD is surely outstanding.

I’ve upgraded to a discman now so if anyone wants my old cassette … then again, I think that one has sentimental value. Not many people remember or still have their first classical music recording. I’m glad I do.

In Singapore, this disc is available at or can be ordered from Borders (Wheelock Place) and Tower (Pacific Plaza & Suntec City).

Finishing this review at 2:52am, Adrian Tan is craving for Teochew Porridge.