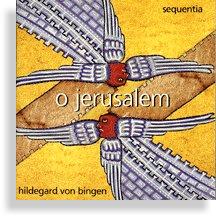 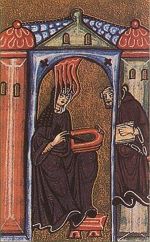 It is a dreadful pity that due to circumstances social and political, women composers have been few and far between. It is a little ironical therefore that the oldest known composer with a recorded biography is perhaps one of the most miraculous of women and of artists that ever lived: Abbess Hildegard of Bingen. By all accounts, she was a remarkable figure of incredible vision and ability.

Known as the “Sybil of the Rhine” in an era where few – let alone women – wrote, Hildegard not only composed monumental works of theology, natural history, medicinal treatises and poetry but was also consulted by and advised kings and popes. Born in 1098 into a noble family, she was dedicated at birth to the church. She began to have visions at the tiny age of three, but hid these from many people except for her caretaker, an anchoress named Jutta, and a monk, Volmar, who was to become her lifelong scribe. The picture on the right shows Hildegard with Volmar.

Hildegard was elected the head of the convent in her anchorage at Disibodenberg after Jutta’s death. Around 1150, she moved her steadily expanding convent to Bingen on the banks of the Rhine, where her name is now attached to. The final thirty years of her life saw much production of music, with her own texts, as well as writings on cosmic relations between man and the universe, the curative powers of natural objects, treatises on the elements and the human body, her morality play Ordo Virtutum and of course theological works such as the Liber divinorum operum (Book of Divine Works, 1163).

The visionary mind of the Abbess extends even to her open and positive attitude towards sexuality — she is the author of probably the first written description of the female orgasm, which she described as a vital component of conception. The visionary art of music was extremely important to Hildegard, which she expresses as a means of re-invoking the ecstacy and beauty of (lost) paradise. She wrote music in the form of hymns and sequences in praise of saints, virgins, holy places and symbols, as well as in honour of one of the greatest emblems of womanhood and maternity, the Virgin Mary. 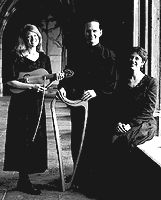 “O Jerusalem” is Sequentia’s fifth and latest instalment in a survey of Hildegard’s complete works; this collection is being compiled to commemorate the 900th anniversary of her birth in 1998. The CD cover picture (from her first visionary work, Scivias) is beautifully reproduced on the disc.

Sequentia (left) presents here a series of symphoniae which might have been used during a dedication ceremony of a newly-built church on Mount Rupertsberg, on May 1st, 1152. The site is named after the Carolingian saint, St. Rupert, whose life Hildegard chronicled and praised in the music on this disc. Accompanied by the bells of the Bamberg Cathedral, the opening O Ierusalem is a huge paean to the city of Jerusalem, which incorporates St. Rupert in her praisings. Quia felix puericia [2] and O felix apparicio [3] sing also in honour of St. Rupert’s pious life.

One of my favourite pieces on this disc is the atmospheric and beautifully evocative untitled instrumental piece on track 5. Played on the medieval fiddle (vielle, clearly visible in photo above), medieval flute and portative organ, it is extraordinarily hypnotic in its transcendent beauty. The instruments weave in and out of a veil of timeless melodic lines, serenely painting a world of meditative majesty. 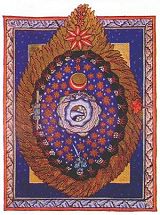 RIGHT: Hildegard’s vision of the “Egg of Creation”.

Sequentia’s male vocal ensemble, the Sons of Thunder, perform O ignee spiritus [10], a powerful (and occasionally violent in the text) hymn to the Holy Spirit. Another untitled instrumental piece follows, played on rebec, flute and harp. It is a truly light-hearted work describing the exuberant energy and happy innocence of childhood, reflecting the youth of St. Rupert. The final piece is “one of the most profound testaments of Hildegard’s veneration of Maria as the embodiment of the feminine spirit” (Thornton) — O quam magnum miraculum est [12] — whose powerful and poetic text I feel I must quote:

How great a miracle it is
that the King entered a submissive
woman’s form:
… and how great a bliss lies
in this form,
because malice
that flowed from a woman —
a woman afterwards washed it away
and founded every softest scent of virtues
and made heaven more beautiful
than previously she had disfigured earth. 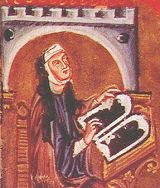 That the name of Hildegard has been honoured by musicians, theologians, historians, writers, poets, the New Age movement and of course, the feminist movement, comes as no surprise. According to some sources, she has recently been canonized, but whatever the case, Hildegard has always been frequently and justifiably refered to as “Saint Hildegard.” Her visions and works conjure up an image not only of a woman of immense spiritual beauty, but also of a true “Renaissance (Wo)man” well before the Renaissance even began.

Hildegard’s humanistic and positive attitude towards life in every aspect serves not only as an example for the dark ages of the 20th century, but also as a reminder that the Middle Ages are not as backward as many believe, and that women can have every potential men have. All these centuries of masculinism has truly disfigured the earth and undermined womanhood; it is, as Hildegard writes above, time to appreciate “how great a bliss lies in this form.” Her art and wisdom are without doubt keys to humanity’s future.

I note with great sadness and shock that Barbara Thornton died on November 8th 1998, aged 48. The year is of course the 900th Anniversary of the birth of Hildegard von Bingen.

A Feather on the Breath of God – Sequence and hymns by Abbess and St. Hildegard of Bingen