INKPOT CLASSICAL MUSIC FEATURES: How to walk into a CD store and not come out totally confused…

How to Walk Into A Classical Music Store
and Not Come Out Totally COnfu!$ed 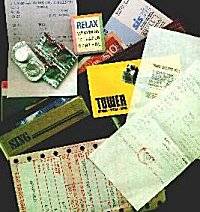 Have you ever walked into a classical music store or the classical music section of a music megamart (you know where I mean) with the intention to buy just one work and come face to face with twenty or more versions at various prices and in numerous permutations and couplings? Have you ever stayed awake at night wondering about the sonic differences between DDD and ADD and between mono and stereo? Are you considerably tempted by those pesky ‘budget’ labels, suspecting that they are irredeemable trash but yet not wanting to pass up on a bargain? If you have any of these experiences, this article could very well save your life!Let’s face it — buying classical music CDs is as much an art as a science. Unless you have deep pockets, you would want value-for-money for your musical purchases. If you have ever paid full price (S$21-S$26) for a CD and found that you hated the recording, you would know how potentially painful classical music buying can be. It would really be a pity if you let this fear prevent you from enjoying more than five centuries of the most beautiful music ever known to humanity. Follow these cardinal rules and walk down the aisles with impunity!

I have known people who proudly proclaim that they only buy “The Yellow Label” (Deutsche Grammophon), trusting it to be a mark of quality. Yes, the cover designs are often attractive and arty-looking, and the big yellow box does make the covers stand out of the endless rows of CD cases. This is a big mistake, and it applies to all labels. No matter what you have been led to believe, all recording labels have their good and bad discs. Sometimes it is not the fault of the musicians, but the recording team. Other times it is the choice of the venue that mars the recording, causing it to be resonant or dry-sounding. Even other times, the digital remastering is poorly done, leading often to a sharp treble. The bottom line is, do not attempt this vain affectation of label allegiance. You will end up much poorer and miss out on many treasures on the more obscure labels, such as Hyperion. Check out the websites of these two labels and see for yourself!

Rule 2: Do not buy by performers.

Believe it or not, not everything by Karajan or the Berlin Philharmonic or the Academy of St.Martin-in-the-Fields (nice name though) is great or even consistently good. Even conductors who command the most reverence among collectors – Frtwangler, Karajan, Bernstein, Barbirolli, Abbado – all have had some down days too. In short, the name of a particular conductor or orchestra is no guarantee of quality. On the other hand, obscure conductors with even-more-obscure orchestras have produced recordings of astonishing musical and sonic excellence. As it has been said of the English Football Premier League, any team can beat any other team on a good day. Buying by performers will only ensure that you get the usual number of duds and clunkers. You should aim to beat the odds.

Rule 3: Use the guides discerningly.

Classical CD guides are highly useful in recommending CDs to buy. The authors are usually extremely knowledgeable in the historical background and the performance practice of the works and have developed an acute musical sense, having listened to countless versions of the same work, often over decades! The most common guides are the Penguin Guide to Compact Discs and the Gramophone Classical Good CD Guide. Less easily available is the Stevenson Guide, which is more of a compilation of ratings given by classical music magazines.

A good beginner’s guide is the BBC Guide to Classical Music, with the most reader-friendly writing of all the guides. Note: all the guides have certain biases and prejudices, so do not take the opinions — yes, they are merely opinions — too seriously. The infamous “British Bias” of the Penguin Guide and Gramophone Guide is an obvious example. Use the guides as guidelines, helping you avoid the thoroughly bad recordings and providing a shortlist for shopping. Another thing: just because it is listed in a guide does not mean that it is available in the shops. Your choice can be somewhat restricted.

One more thing: different people have different tastes. If it so happens that you are the only person among a million others who thinks a particular CD is aural heaven, then for you own sake, IGNORE all other criticism.

Having narrowed the possible candidates, it is time to take the final step. The good thing about the classical music industry today is the pervasiveness of what are called budget labels, led by the pioneering efforts of Naxos. Mind you, just because the CDs are inexpensive does not mean that they are inferior to the products of the bigger labels. The first rule of CD collecting is:

Price Has No Relation To Quality Of Performance

If you are new to the work and just want to buy a copy to find out what it sounds like, or if you simply want a decent listening copy, go for the budget CD (about S$9-13 a pop) with a decent recommendation from the guides. This way you spend less, and thus do not stand to lose so much money in case you hate it. The worldwide success of Naxos has led to retaliation by the major labels (e.g. EMI, Deutsche Gramophone, Decca, Philips, Warner, BMG). They have spun off budget lines of their own – witness Philips Duo, Double Decca, DG Double, EMI Forte, Ultima, BMG Twofers or Decca Eclipse, DG Classikon, EMI Red Line. In addition to Naxos, other budget labels include Discover, Carlton, Laserlight and BBC Radio Classics. They are usually well-filled, often sporting 60+ minutes (compare this with a 40+ minute pop music CD at S$20!). You will definitely get to listen to a lot of music without burning a hole in your pocket.

(An interesting thing to note is that the major labels, often in cheapening the price of their wares, cheapen the quality of the CD sleeve notes too; whereas Naxos is famous for its profusion of extensive and high quality notes. If you are buying vocal works, take note of the presence/absence of libretto.)

I am not prejudiced against all recordings before 1960 – some have very good sound for the times, although usually not of the highest quality. Most of these recordings are monophonic, as stereo only became technically feasible to the late ’50s. Some performances of these older recordings are unsurpassed by more recent versions. Most listeners, I suspect, would desire at least decent-quality, stereo sound for their first recording.

This rule is to prevent an unwitting buyer from acquiring a historical CD on the recommendation of some unbridled Frtwangler fan and coming out sorely disappointed by the inadequate sound. Such historical CDs are great as second versions, when the listener has acquired a feel of the work and is ready to take risks in the sonic aspect.

Anyway, there are hoards of perfectly good modern recordings at mid- and budget-price to satisfy any beginner. Lastly, do not concern yourself with the DDD or ADD code of a CD – they simply denote the recording process and do not correspond to the actual sonic quality of the disc. Digital recording does have its inherent advantages – higher fidelity, wider dynamic spectrum, better clarity. However, the final result is very much dependent on the recording and engineering techniques employed and the equipment used in your home. It is all too common to listen to a DDD disc and realise that the sound is actually much poorer than analogue CDs (ADD or even AAD) that were well recorded.

The best way to avoid being disappointed in your purchases is to listen to the CD before buying it. An even better idea is to approach a friend who collects classical music CDs and borrow them! Once you have understood the quirks of the guides and have listened to enough well-recorded CDs, you will be confident enough to make your own judgements when buying classical music CDs. You will no longer have to put up with ignorant sales staff again!

Isaak Koh is a rabid bargain-hunter when it comes to collecting classical CDs.

Back to the Classical Index!… or read previous classical music reviews in the Inkpot archives.