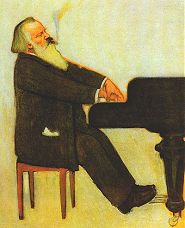 THE KEYS TO BRAHMS’S MUSIC An Inktroduction by Jeffrey Dane

Period pieces played on period instruments offer a tangible sonic link with our musical past. Hearing a composer’s music performed on his own piano, or on one he himself used, has an even more direct historic connection: it allows us to experience the same instrumental colors he himself expected to hear. A kind of revelation, it can make us realize he was as alive then as his music is now.

A creature of habit, like most of us, Johannes Brahms preferred writing with quills, even after they were long out of fashion, and his staunch conservatism manifested itself not only in his personal and musical nature but also in the pianos he used, the timbres of which represent the very sounds he heard.

Hamburg-born Brahms could have opted for the German instruments like the Ibach, the Steinway, the Bechstein (used by Liszt) or the Blthner (favored by Mahler), but fittingly his choices led him toward pianos made in Austria, where he spent most of his adult life. Three of his still extant pianos are permanently exhibited in as many locations in Austria. 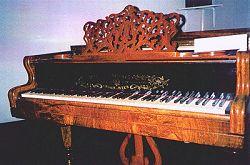 The most significant of Brahms’ pianos, made by J.B. Streicher of Vienna, was for many years in the composer’s own Vienna apartment at Karlsgasse 4. (The building in which Brahms lived was demolished on April 3, 1907, exactly ten years after he died there). This Streicher Flgel was displayed at the Brahms Museum in Mrzzuschlag during the Brahms Festival in the fall of 1996. The author had the unique experience of playing this piano, whose tone, befitting the nature of Brahms’ music, is wonderfully smooth and mellow, and which offers us the sounds of an era that died with him. The size of this massive piano is also in keeping with the magnitude of Brahms’ work. Paradoxically, the instrument is still in private hands. It has been bequeathed to the city of Vienna and will ultimately pass to its ownership. 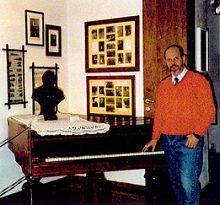 Left: The writer, standing beside at the Bsendorfer piano Brahms used in Bad Ischl.

The Kammerhof Museum in Gmunden displays in its extensive Brahms Collection a small Bsendorfer grand piano the composer used during his twelve intermittent summer holidays in Bad Ischl in the 1880s & 90s. It was undoubtedly this very piano he used in the autumn of his life when he composed his last piano works, the gems which remain today as sparkling high-water marks in the settings of piano literature. The instrument was for many years in the care of Frau Prof.Dr. Elfriede Prillinger, who was then the Direktor of the Kammerhof Museum’s Brahms Sammlung, and who graciously let the author play the instrument. The composer himself endorsed the Bsendorfer pianos in writing.

The Sammlung Alter Musikinstrumente at Vienna’s Kunsthistorisches Museum has on permanent display numerous composers’ pianos, all in the keeping of the collection’s Curator, Hofrat Dr. Gerhard Stradner. One of these is a Viennese grand piano made by Conrad Graf (who had made Beethoven’s last instrument). This Graf piano has a solid Brahms connection: Robert Schumann had it in his workroom at Bilkerstrasse 15 in Dsseldorf, and it was this very piano the 20-year-old Brahms played for the Schumanns when he first visited them in October, 1853. The piano later came into Brahms’ possession. 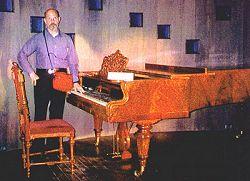 Right: The writer again, standing beside the Bachmann piano used in the recording of “In Memoriam Claudio Arrau”.

Brahms spent the summers of 1884-85 in Mrzzuschlag composing his Fourth Symphony in E-minor, op.98. The Dietrich House where he lived is now The Brahms Museum, the only such entity in the world. Its dominant exhibit is a concert grand piano made by Wilhelm Bachmann of Vienna ca.1850.

Given the advances in piano construction even between 1825 & 1850, the Bachmann instrument has a timbre somewhere between that of the hammerklavier and a modern concert grand, leaning in the latter direction while retaining a direct sonic connection with the former. The sonorities of the Bachmann piano are closer than our modern instruments to what Brahms himself heard. A gift from Dr. Peter Freiberger of Mrzzuschlag, the large Bachmann piano is displayed prominently in the Museum’s recital hall, where performances are given on the instrument even today.

In Brahms’ day the piano belonged to friends he often visited at their home at Wienerstrasse 50, not far up the street from his own corner-house dwelling in the Dietrich House at Wienerstrasse 2. The original keys remain, just as Brahms himself had played on them.

Performances and recordings of Brahms’ piano music on modern instruments tell us, “This is the music Brahms wrote.” Hearing his music played on his own pianos reveals to us, “These are the tone colors Brahms heard when he played this piano.”

Brahms accomplished more in a single year than most of us do in our combined lifetimes, and it’s providential we are reminded of him by these tangible and significant remainders of him.

Jeffrey Dane is a music historian, researcher and essayist whose work appears in the USA and abroad in several languages. He has researched in Europe’s musical centers and writes extensively about the composers. His book, Beethoven’s Piano, was published by New York’s Museum of the American Piano.