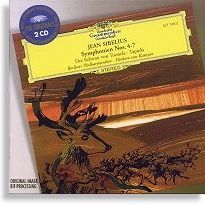 (Two years ago I guessed this reissue would happen). Karajan’s classic 1967 recording has just been reissued on DG Originals (March 1999), also at mid-price, but with more music on two 70+minute discs. The single disc on DG Galleria (click here to see) is still available, but not likely for long. This famous reading is cogently argued and above all, spine-tinglingly intense. Like the Philharmonia version (reviewed below), the sense of progression and line is very strong, the sense of living movement taut, the grand energy palpable. The control of tempo and rubato is very natural, a credit to both conductor and the incredible cohesion of the orchestra. It is probably the result of the superb recording that the great beauty of the winds come through here so much better. The level of detail the players and sound engineering capture and create is astounding for the recording’s age, adding a further dimension to the experience of listening to the Symphony. The Berliners play with supreme intensity, particularly up to the soaring “storm” section after the third trombone climax, where even the basses can be heard tremoring with earthshaking power. All the more impressive the quietening development into the serene section after the “Affettuoso”. The final bars teem with strength and purpose, but is not (surprisingly after all the bellowing) overblown. Karajan, always a conductor of great intelligence including in Sibelius, reveals the final splendour of the Seventh Symphony with firmness, clenched-fist conviction. This symphony was previously coupled with Karajan’s 1965 Fifth at full-price, then with the Fourth at mid-price; and now the entire quartet which he recorded in this incomplete cycle is once again available together. Comparing with my “first generation” full-priced release CD (Nos.5 & 7), the remastered disc (on Originals) has receded very slightly to make a more natural sound. Where occasionally the original sounded raw (particularly in the giant fortissimo sections), the new disc has a slightly warmer and smoother sound. But whatever the case, the power of the reading is completely retained. Recommended as a heavyweight reading.