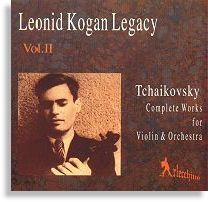 Tchaikovsky was 38 when he began work on his concerto for the violin. His disastrous marriage had collapsed the year before and that had led to much despair, profound depression and an attempt at suicide. On his doctor’s advice to travel, he had left Russia to meet his brother in a Swiss retreat at Clarens on Lake Geneva. There, Tchaikovsky quickly regained his equilibrium and finished his Forth Symphony and part of the score to his opera Eugene Onegin. 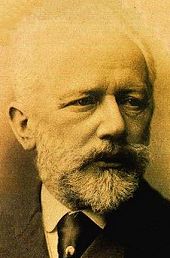 On his further travels to Italy, Tchaikovsky (left) met the brilliant young violinist Joseph Kotek, a student of Joseph Joachim and a friend of Mme. von Meck – his patroness. They had played through many works together, including Lalo’s Symphonie Espagnole, which is a violin concerto by anything but name. These events so revitalized Tchaikovsky that he set out to write his own violin concerto.

The Concerto was finished in a matter of weeks and Kotek was instrumental in extending the ‘virtuosity’ of the violin part. The original slow movement was ultimately rejected, however, and it now exists as the Meditation from the Souvenir d’un lier cher, Op.42.

However, due to Auer’s decision to deem the concerto as ‘unplayable’ – Kotek was reluctant to give the premiere of the work in St. Petersburg on the grounds that it would be a bad career move; this destroyed the relationship between the two friends irreparably. Nevertheless, Auer was to change his mind in his later years and in his remaining days, he became a great champion of the Concerto. Auer further made use of the work extensively in his teaching of his students – which included Heifetz, Oistrak and Kogan himself. This is the tradition which Leonid Kogan brings to this concerto.

There is a bright magnetic tone and absolute precision – that which characterises Kogan – which he brings to this version of the oft-recorded Tchaikovsky Violin Concerto. Tempos are exciting when required and this is matched by effective brilliance in finger-work and bowing nuance. Interspersed between the technically showy parts are the beautiful, broad and lyrical passages which capture the tenderness of this well-loved concerto. In these passages, Kogan succeeds in evoking the right amount of imagination in me. Further, Kogan manages the transition between these different segments of music perfectly.

The orchestra matches the pace and excitement generated by Kogan with very laudable playing. Though the recording is manipulated to show off Kogan to the best (and in parts, a bit too bright and too disparate), the orchestra is still heard with acceptable quality. There should be no worries of the sound qualities in this recording. 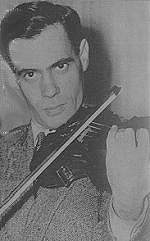 The first movement cadenza that follows is note- and intonation-perfect, measure for measure, note for note everything that should be there is impeccably paced and placed while vibrato, tone and nuance is used to skilful effect. This is the characteristic of masters, and Kogan (right)is no different – a mixture of the best of the Russian tradition mixed with great scholarship and sensible musicianship. The first movement leaves me entirely breathless – pay attention to the passages from 16’44” to past-17’00” – such amazing panache. Though I might wish that Kogan would have employed Auer’s version of double-stopping, his own version is no less exciting.

The slow movement Canzonetta is transparent and sustained. Kogan’s interpretation can be said to be spot-on. It wrings melancholy from between notes, adds a degree of firmness and nobility in what might be reduced into mush by less mature players.

There is a certain pulse that propels and keeps the music, as it were, alive. This is to a great extent due to the phrase-sculpturing, which can be heard in the conductor’s direction. This goes well into the third movement, which I consider easily fragmented if not played well. This is itself due to the Vivacissimo section being interrupted more than twice by slower motifs.

Kogan employs it convincingly to his advantage – adding on to it each time – before launching the finale with speed and virility. The usual ‘last breath’ of the violin in this concerto, which is usually drowned in modern recordings, is heard piercing through the orchestral madness with a strange strangulated sadness.

This entire concerto runs its course with unsurpassed style. If not for the lack of ‘DDD’ broadness, this would be my rosette choice for this concerto.

The recording is already a worthy buy for the Concerto, but with the added ‘complete’ works for violin and orchestra – it becomes all the more enticing. Kogan is seldom excessive and the keywords that describe his interpretation must be “subtle moderated madness”! Never employing showy pyro-techniques, he convinces with real musicality. One can easily hear this in the pieces that follow the main offering – short works of great emotive power (Serenade Melancolique), gaiety (Valse-Scherzo) and lyrical tenderness (Melodie).

There is much wit, charm and grace in Kogan‘s playing of these smaller pieces. Notably, one can compare the playing of Valse-Scherzo (tracks 5 and 9), and Serenade Melancholique (tracks 6 and 8) which are recorded on different occasions – yes, two performances are offered. Both are more than good. The bonus tracks are of significantly poorer sound (with added audience noise), but nevertheless, there isn’t sufficient grouse to complain about them – given their ‘bonus’ nature.

Leonid Kogan – An Inktro and Tribute | Prokofiev Violin Concerto No.2 and Violin Sonatas | Music for Violin, Piano and Guitar (Revelation)