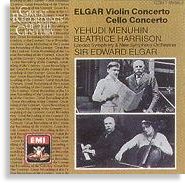 Beatrice Harrison was one of the first and few cellists to tour with the Elgar cello concerto. When Elgar first heard her playing, he made sure that whenever he conducted it, she was the soloist, hence this recording. There is an earlier recording which I have not heard, but this is already fantastic.

The Penguin Guide says that she seems unfocussed and glosses over things, but I don’t find this the case at all – the laissez-faire approach to her playing comes from a deep understanding of the work, which emphasizes the classical rather than Romantic approach to the work.

The recording takes up to 8 minutes less than that of John-and-Jac. Elgar of course knows his work very well indeed, and though he takes it at a quick pace, he never misses a detail. This was recorded in the late ’20s but comes in quite good sound, for its time. The recording of the violin concerto with Yehudi Menuhin is already well-known as one of the glories of the gramophone, which it is, and needs no further recommendation. 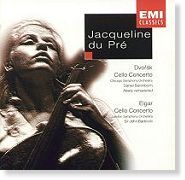 If you don’t have a recording of the Elgar cello concerto, and you want one in good stereo sound, then please go get Jacqueline du Pr’s splendid recording of the work with Sir John Barbirolli (or John-and-Jac) Sir John Barbirolli was an Italian cellist who migrated to England when he was very young. He quickly established himself as a talent in English music, and more notably, as an accompanist. Heifetz once said that Barbirolli was the only one who could follow him in a concerto.

Barbirolli apparently played in the premiere of this very concerto, giving him some kind of authority, but whatever the case, the proof of the pudding’s in the eating, and he gives an impassioned account of the work with du Pr.

The cellist Jacqueline du Pré was one of the most promising talents England had produced in the fifties. To watch du Pré play is joy itself – check out her live recording-cum documentary of the Elgar concerto on Teldec. She was spontaneous in the extreme and her recording of the Elgar speaks with the authority of one who was born to play.

Her approach is very different – in fact it is a full-blown romantic approach which never becomes indulgent though. Barbirolli’s played the cello as mentioned earlier, and he understands totally the needs of the soloist. The accompanying Dvorak concerto is not as good, due to the conducting and recording of the piece, but it is still up there with the best.

On the other hand, please stay clear of her later Sony recording (SB2K 63247) with husband Daniel Barenboim where the slow movement is excrutiatingly lethargic, and the line is lost completely. The playing is also self-indulgent this time. Sadly, this was one of her few recordings as she tragically succumbed to multiple sclerosis and was never more able to play the cello – surely one of the great losses to music, together with Dennis Brain and Fritz Wunderlich.