The first film I ever watched in a theatre was AMADEUS (Forman, 1984), and I came away from it firmly believing that that crazy nut Salieri killed Mozart by dressing in a mask and telling him to write his own requiem. Years later, when I watched SPARTACUS (Kubrick, 1960) for the first time, I didn’t think there was any reason not to believe that the real slave Spartacus wasn’t crucified at …, nor that high-level Romans were oyster-stuffing debauches with British accents who used food metaphors to make sleazy overtures to their slaves.

Many other such “autobiographical” films that sensationally distort history have caused historians distress, but what happens when films are about living legends? Several Oscar-nominated films down the line from AMADEUS, the controversy surrounding the 1996 film SHINE stirs up curious questions about the degree to which artistic license should be allowed to stray, and the effect of populism on the classical music world.

SHINE, directed by Scott Hicks, tells the story of the child prodigy David Helfgott, an Australian pianist whose early musical success is derailed by the onslought of mental illness, apparently the result of parental pressure, and he is institutionalized for more than a decade. Things improve when Helfgott recovers and meets a wonderful woman who helps to heal him and later becomes his second wife. His career as a classical pianist is restored to full brilliance. 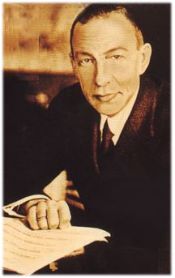 SHINE has been a success in many ways. Its lead actor Geoffrey Rush won the 1997 Oscar for Best Actor for his portrayal of the adult Helfgott, and the film itself has a bagful of other awards, including the Best Director prize from the Golden Globes and the Australian Film Institute.

The Helfgotts too have benefitted. In 1997 David Helfgott completed fully sold-out performances — the “Shine Tour” — in North America, London, Europe, Japan and Germany. A large proportion of his adoring audience was made up of first-time classical concert-goers. The movie’s soundtrack reached the top 10 of Billboard Magazine’s classical crossover chart, and even cracked the POP charts in Britain. His RCA Red Seal recording of the works of Rachmaninov (right – visit the Inkpot Classical Archives for the real thing), including the No.3 Concerto portrayed as crucial to Helfgott’s life in SHINE, has sold hundreds of thousands of copies worldwide. Gillian Helfgott’s book I Love You To Bits and Pieces, which details her life with David Helfgott, has 185,000 copies in print.

But where SHINE won the hearts of international film critics, the film’s subject himself has yet to conquer the classical music domain. Helfgott, perhaps the most famous living pianist in the world, and certainly the most beloved, has also been criticised as the most undeserving of the label “musical genius.”

Snubbing his North American and English debuts at in Boston and London, music critics roundly attacked his playing as “incoherent,” “painful,” showing “a total lack of musical awareness, and a keyboard technique in ruins.” The by now much quoted Boston Globe review of Helfgott’s opening performance at the Boston Symphony Hall in March 1997 denigrated his playing as being “without phrasing, form, harmonic understanding, differentiation of style and often basic accuracy; worst of all, it was without emotional content.”

“The sad fact,” Globe critic Richard Dyer concluded, “is that David Helfgott should not have been in Symphony Hall last night, and neither should the rest of us.”

Detractors also questioned his mental ability to perform, but to them the most ire-provoking of all was the outrageous gap between the extent to which Helfgott is celebrated — packed audiences at prestigious, respected venues like the Royal Albert Hall, the Sydney Opera House and the Seattle Opera House, and his musical talent, which many perceive as dismal. Salon writer Douglas McLennan may have the most perceptive explanation of this critical anger, writing that many are upset because “Helfgott … has not won his celebrity through performances, but his performances through celebrity.”

Understandably, therefore, several critics harshly denounced Helfgott as the product of excessive marketing. Time Magazine reviewer Jesse Birnbaum, for example, described the pianist as “scarcely more than a pathetic sideshow attraction, put on display by his promoters and his wife for the delight of the undiscerning, if adoring, audiences who found SHINE so moving,” adding that the only thing lacking was “a Disney tie-in for a Helfgott doll.”

Helfgott’s “pop star” status and marketing power is certainly in evidence with his Singapore debut. The managing company bringing him in is known more for introducing popular acts (they were responsible for Stomp!) than respected classical music performers. Much more annoying is the price range for the one-night performance: the minimum ticket price is $60 but these are only for the far left and right areas in the back of the auditorium. The majority of the seats go for $150, and a “marquee package” for $250 includes the right to meet David Helfgott and drink champagne in a private reception area.

The brunt of criticism, however, is Helfgott’s wife Gillian. Critics have gone as far as to accuse her of deliberately not adminstering the medication that might allow her husband to lead a normal life, in order that she might continue to profit from his concert tours. In her book, Gillian Helfgott writes that if she did this, “he’d be robbed of his passion to play each and every day of his life.”

Presented in both the film and her book as the woman who “saved” David and restored his happiness, Gillian Helfgott is wife and guardian of sorts to David. She travels with him on tour, and also gives interviews on his behalf. To this writer, she naturally dismisses suggestions of exploitation, explaining that her husband “lives to play the piano.”

Instead, she points out that David enjoys performing and has a good relationship with his audience, saying that “if you can show me a happier classical performer than David Helfgott, I would be very surprised.” She adds that when on stage, he exudes joy and his audiences delight in it. “No one has ever forced him to tour and people who make those comments obviously have not spent any worth while time with David.”

In fact, the problem is precisely that not many people seem to have spent much time with the hyper-energetic David Helfgott. Helfgott is a bit of a cypher, always protected and spoken for by his wife, who also arranges and manages his tours. The situation is made even more intriguing by the fact that the narrative of SHINE, the main means by which many have come to discover and love him, has also been countered as fraudalent.

David’s sister Margaret has written her own book, Out of Tune: David Helfgott and the Myth of Shine, disputing the accuracy of many events in the film and in Gillian’s book. She asserts that David’s father, like Salieri in AMADEUS, has been fictionalized for the movie. She claims he was not monstrous and strict, as depicted in SHINE, but loving and concerned for David. In fact, the senior Helfgott, who is shown to be haunted by his experience as a Holocaust survivor in the film, apparently had already escaped to Australia when Hitler came to power.

Other counterclaims have come from David’s brother Les Helfgott, who calls the film and Gillian’s book’s “outright lies,” from David’s doctor and from his first wife Clara, who accuses Gillian of manipulating David’s life.

How close to the truth is the “myth of Shine?” How important is it that we find out? The one thing that many reviewers agree on is the power of David Helfgott’s stage presence and the positive effect he has on his audience. Certainly, no one disputes David Helfgott’s love for his art, nor the fact that audiences have unconditionally embraced him. Helfgott, whose favourite performers are Horowitz and Rubenstein, professes great happiness at being able to perform in front of people.

“It is paradise to perform in front of an audience — a great emotional and spiritual experience,” Helfgott says. “I feel at one with the audience and I have an image in my thoughts which inspires me. I think of the beauty of the music and imagination it generates.”

If out of the thousands that flock to his crowded performances seeking the man who inspired and touched them in SHINE, there are enough newly initiated into the classical music world who forever eschew the nasty strains of hiphop and stay on, then perhaps David Helfgott should be supported for his contributions to the musical world.

This again is Gillian’s argument. She emphasises that he draws many young people to his concerts, an added benefit as attendances at most classical recitals have declined over the past years. “After all,” she notes, “the audience is the most important factor.”

Given Helfgott’s lack of critical success, audiences must be very important to the Helfgotts, as they will continue to tour Japan, Canada, and Europe in mid-1999, and continue throughout Australia later that year. And if students are what the Helfgotts care about, they should be informed that not many students in Singapore can afford $150 tickets.

But what of the man himself, the triumph of his battle over the illness that imprisoned him and kept him from the music that he loved? As Gillian quotes a fan letter they received in Japan from a person who had also suffered mental problems, one realises that David Helfgott has achieved something many other finer musicians will probably never be able to do. In helping this Japanese fan who drew strength and inspiration from his story to overcome his problems and become a composer, David Helfgott has touched many other people with his own example.

In the end, so what if the unwashed hordes who worship David Helfgott wouldn’t know musical phrasing if it sat on them? Roger Woodward, the classical pianist who played Helfgott’s musical rival in SHINE, once praised David Helfgott as an important contributor to classical music: “Because of the success of this extraordinary film and his career in life and what he’s done, and the way he’s brought all these strands together, he’s done a colossal service to classical music all over the world.

If David Helfgott continues to affect people the way he does when he performs, then perhaps this is all we should be asking for.

That and a 20% cut on ticket prices, please.

Rebecca Wan is a laid-back pleb who bought the soundtrack to AMADEUS because she thought Tom Hulce was cool in the movie. Hey, marketing works, so bite me.