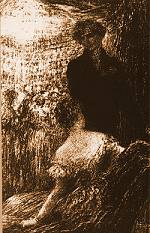 In 1827, an English theatre company arrived in Paris for an exclusively Shakespearian season at the Odon. Genuine interest in ‘The Bard’ and his works were gaining foot in the French capital thanks to the influence of Stendhal and Victor Hugo. The young Hector Berlioz was certainly among this cultured and learned lot; and he made it necessary to be present at the opening night’s staging of Hamlet. Playing Ophelia was a beautiful Irish actress by the name of Henrietta Smithson, and it is with her that Hector’s (and our) fantastic journey begins.

His susceptibilities were doubly assaulted: by the magic of Shakespeare, and by the actress who interpreted the female lead. Leaving the theatre that evening, Berlioz vowed never to again expose himself to such emotional bombardment. His passion for Henrietta quickly developed into a torture. Soon reduced to a deplorable state of nervous exhaustion, he wandered aimlessly in the streets and in the fields, sleeping when and where he could. His will became flaccid, his faculties paralysed, he lost interest in everything except his vague dreams of Henrietta and Shakespeare.

Berlioz made several desperate attempts to bring himself to her attention: he sent her numerous screeds, and their violence frightened her. In the spring of 1830, Berlioz wrote to a friend, “I was about to begin my symphony [Episode in the life of an Artist] in which the development of my passion will be depicted.” The “Symphonie fantastique [pisode de la vie d’un artiste]” was first performed in the hall of the Paris Conservatoire on 5 December 1830, and the conductor was Berlioz’s friend and champion, Franois Habeneck.

This five-movement work, entirely original and daring in its concept and style, brings together a whirlpool of ideas both musical and literary (he had then discovered Goethe’s Faust and Beethoven’s Symphonies); culminating in a sonic experience that is nothing short of mind-blowing. All five movements contain a single, recurrent theme, the ide fixe (“Fixed Idea”, not unlike Wagner’s leitmotifs), which represents the artist’s love and is transformed according to the context in which the artist finds his beloved. The following are excerpts from the composer’s own programme notes which accompanied the premire: 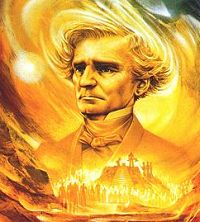 First movement: RVERIES PASSIONS (Day Dreams Passions) a young musician sees for the first time a woman who possesses all the charms of the ideal being he has dreamed of, and falls desperately in love with her the beloved vision never appears to the artist’s mind except in association with a musical idea the tune at the beginning of the first allegro constantly recurs in every movement. The transition from a state of dreamy melancholy, interrupted by several fits of aimless joy, to one of delirious passion, with its impulses of rage and jealousy, its returning moments of tenderness, its tears, and its religious solace

Second movement: UN BAL (A Ball) the hubbub of a carnival, in peaceful contemplation of nature the beloved vision appears before him, bringing trouble to his soul

Third movement: SCNE AUX CHAMPS (Scene from the Meadows) One evening in the country, he hears in the distance two shepherds playing a ranz de vaches he thinks of his loneliness; he hopes soon to be alone no longer But suppose she deceives him This mixture of hope and fear, happiness disturbed by dark forebodings, form the subject of the adagio.

Fourth movement: MARCHE AU SUPPLICE (March to the Scaffold) The artist, now knowing beyond all doubt that his love is not returned, poisons himself with opium (he) plunges into a sleep accompanied by the most horrible visions. He dreams that he has killed the woman he loved, and that he is condemned to death, brought to the scaffold, and witnesses his own execution

Fifth movement: SONGE D’UNE NUIT DU SABBAT (Sabbath Night’s Dream) He sees himself at a witches’ sabbath, in the midst of a ghastly crowd of spirits, sorcerers, and monsters of every kind, assembled for his funeral The beloved tune appears once more it has become trivial and grotesque; it is she who has come to the sabbath