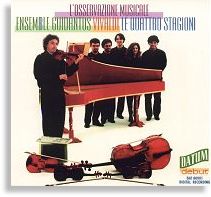 With thanks to Prof. Massimo Negrotti! CD includes sonnets in Italian with no translations.

The Ensemble Guidantus is a group of six Italian musicians focussing on 18th century music, in particular that of their very own Antonio Vivaldi. It took me a while to realize that they were not playing on original instruments, so attuned these musicians were to the interpretive styles of the period performance schools. Even tone-wise, the Ensemble plays with a great range of colours, from the sinewy (typical of period instruments) to the buzzing (of insects), the humourous to the sweet, and more.

Like the Earthbeat! version reviewed earlier, this recording also makes use of sound effects derived from nature, generated and controlled via computer. The effort is admirable, but not always subtly done – that is, it could have been achieved with more smoothness. Often, the sounds suddenly disappear rather than fade away, which betrays its artificiality. Nevertheless, it is not uneffective; and for those who may find the Earthbeat! version rather too colourful, this chamber version with effects may be preferable. On to the music:

The immediate impression is of the over-reverberant acoustic – this is fine by itself, but unfortunately, this often detracts from the sounds of nature in the background, for example birdsong. The sensation of the narrator being in an empty room disturbs the “open air” atmosphere of the birdsong. (Unless we were in a bird shop!). Still, I thought the idea of having the sonnet read through with appropriate sound effects (there is a synthesized bagpipe in the village dance) appropriate.

I was at first very shocked by the pushed pace of the opening Spring movement. This is no merry dance of joy, but more a bursting forth of melody. This put me off for quite a while until I realised that – hey, that’s exactly what the sonnet says: “Spring gushes forth…” In fact, after two months of listening to it on and off, it suddenly dawned on me how spritely and spontaneously effusive this peformance is. Still, if you’ve always enjoyed this movement played at a moderate dancing, skipping pace, this may not be for you.

Thankfully, this hectic treatment does not pervade all the music. To the chilly sound of a hoo-ing wind, the shepherd dozes as his dog barks meekly – the effect is all very quiet, peaceful yet ominously melancholic. The bagpipe opens the finale with a brief twirl on the main theme before the Ensemble gives us a serene rendition of the villagers dancing.

Crickets and frogs stir the hot summer air as the narrator reads from Summer. The opening movement of this concerto here lasts nearly 6 minutes – it opens with langorous weariness, almost falling asleep, such is the “torrid heat”. In contrast, the “cuc-koo” and piping of the summer birds is frantic – in all, a very concentrated tone picture is created. I particularly enjoyed the slower reading of the Wind section, with the distinctive 4-note chugging cello figure and the individual swirling strings (very effectively) made all the more obvious in a performance by a small ensemble. Like the sleeping shepherd of Spring, there is a sense of dark disquiet in this movement. The “harsh, menacing gusts” blow evilly as the movement is swept away.

Here, the Ensemble also quietens the thunder of the middle movement, which is normally made to sound contrastingly loud and sudden next to the timid prayers of the fearful shepeherd. One is made all the more to sympathise with him.

But we know what’s going to happen – thunder cracks, and the storm rages. With reduced strings, I must again reiterate how silvery clear their runs are, with soloist Pedrona driving the cold rain down onto the trees and crops with fierce determination – it sounds almost inevitable. Once again, in a clever move, a distant clap of thunder ends the movement and concerto. 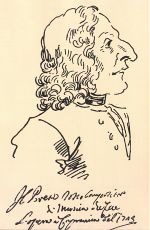 Left: A caricature of Vivaldi (1723) by Pier Luigi Ghezzi. The inscription reads “The Red Priest, composer of music which the opera performed in the Capranica in 1723)”.

The cheering peasants celebrating “with song and dance” sound more like a football crowd(!), contrasting strangely with the narration of Autumn. Add to this the distant pealing bells, and I got an image of a train pulling away from the station to the cheering well-wishers. Italian football team leaving for France? The sound effects of horses trotting by gave me the impression of a coach clattering over a cobbled street rather than huntsmen charging through a forest. Sound effects for Four Seasons is not a new idea, but if it is to be done, it should be done with poetic finesse. Most of the effects used in this recording are convincing (though I still prefer the Earthbeat! version’s), but the ones for this first movement of Autumn are weird. As it ends, the crowd cheers again, as if a goal has just been scored!

The performance of the music itself is bright and lively, focusing on its quick nature rather than the dance (as it was in Spring). The passages depicting the stumbling drunkards are worth noting.

One thing I must highlight is the interpretation of the middle Autumn movement, depicting peasants in sweet slumber. Much has been done to characterise this wistfully sad piece, which originally has no part for solo violin. But since we’re talking about a 6-piece ensemble here, it makes no sense to “distinguish” between a movement with principal violin solo, and one without, since the 1st or 2nd could easily pass off as soloists. Hence, the Ensemble Guidantus rework this movement into a Bach-like, slowly winding conversation between the floating solo strings. The result is mesmerisingly stunning in its sorrowful beauty and delirious solemnity – I didn’t say “Bach-like” for nothing. Absolutely great work here from the misty strings, the melancholic harpsichord and the almost grieving cello.

The ‘cobbled streets’ of the hunters’ forests return momentarily before the Ensemble launches into a (again) quickly-paced account of “The Hunt”. I don’t like it this way, as I prefer the more common interpretation which makes the movement dance joyously. On the other hand, it suddenly occurred to me (again) that this is how a hunt should be, isn’t it? Fast, hurried (but to the Ensemble’s credit, not hectic), full of la chasse – hunters don’t charge into the forests waltzing after their foxes, right? (Imagine the horses!)

The narration for the Winter sonnet opens with an evilly ‘hewling’ wind which sounds like something out of an early Star Trek movie… Listen for the howling wolves too (though they sound disturbingly human). Anyway, the performance of the first movement is another gem in this disc worthy of any Four Seasons performer’s note. Notice the creepily purposeful way the strings shiver, their thin frozen tones, the freezing wind of the solo violin and the frustrated tutti stamping of feet – but most impressive of all, the Ensemble’s spontaneously- and naturally-executed accelerando towards the middle section.


The harpsichord throws in a little melody after this. The second half has many harmonies voiced differently from the original score (and most recorded accounts) and continues to effectively but subtly play with the tempo. This is one of the most impressive (re-)interpretations of the first movement of Winter I’ve ever encountered – a thoroughly musical and educational trip from beginning to end.

The “Winter Largo” is given a simple treatment. Mainly, instead of focussing on the melody line in legato style, the performers have gone for a slightly more andante-ish walking beat. Different but effective. Likewise, the final movement is essentially a straightforward account, with little moments of inspirational phrasing which makes it worth hearing. Pedrona’s solos are taken Paganini-like, skittering high above the accompaniment magnificently, all ending with a whoosh of cold wind.

All in all a very interesting and often special interpretation of this warhorse of warhorses. I must warn that it took me two months to get used to the reverberant, “large empty room” acoustic; but after that was settled, the many musical merits of this performance demonstrated themselves readily. It is of course a boon in itself to have Italians performing their own music, and the chamber ensemble arrangment here ensures quality players throughout. It might even be said that the concertos have been “converted” into something closer to a concerto grosso/orchestral suite, so effectively is the soloist merged into the ensemble.

Birdsong returns momentarily – we are reminded that spring returns after winter. But in a quiant gesture of programming insight, the disc gives us three solo harpsichord pieces by Franois Couperin, the first depicting a bird.Now, Monsieur Couperin composed many many very beautiful pieces of music for solo harpsichord and I strongly advise anyone interested to go try Vol.1 of Naxos’ series (like many other Naxos series, ground to a halt for the moment), performed by Lawrence Cummings (Naxos 8.550961). Anyway, harpsichordist Leonardo Morini bids us a warm farewell on behalf of the Ensemble Guidantus here, with a heartwarming rendition of Le Rossignol (“The Nightingale”). The sound of waves washing on the shore herald Les Ondes (yup, “The Waves”), which has a head-swaying swing about it depicting both the wash and the rhythm of the waves. Finally, we have Le Moucheron (does this mean “The Housefly”?), a cheery meandering piece which ends the disc. All very charming indeed.

The Ensemble Guidantus hails from the Institute of Methodology, Lab for the Culture of the Artificial at the University of Urbino, Faculty of Sociology. Click here for their Composition Page or here for La.Musa – the Lab for Music and Sociology of the Arts.

This disc can be ordered from Borders (Wheelock Place), Tower (Pacific Plaza), HMV (The Heeren).

Chia Han-Leon remembers his meals when he was in Italy for a while… pasta, pizza, more pasta, pasta, pizza…

Back to the Classical Index!… or read previous Baroque music reviews and features at the Inkpot