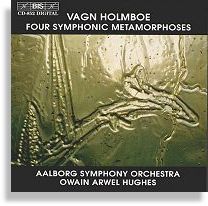 Northern Europe at the beginning of the century developed its very own school of symphonic thought; represented in Finland by Sibelius, and in Denmark by Nielsen. Carl Nielsen (1865-1931) was considered Denmark’s greatest symphonist until his untimely death; and that honour was quickly bestowed upon his younger, ambitious and undoubtedly prolific countryman, Vagn Holmboe.

Holmboe was born in Horsens, Danish Jutland, on 20 December 1909. He received his musical education in the capital city of Copenhagen with Finn Hffding – a Vienna-trained symphonist whose works have been peculiarly ignored – and distinguished Palestrina-scholar, Knud Jeppesen; thereafter in Berlin with Ernest Toch. His interest in ethnomusicology led him on a trip to Romania, where he studied and collected folk-music material and wedded the pianist Meta Graf. It was there also that his admiration for the music of Béla Bartók was fostered. Upon his return to Denmark, Holmboe took on various teaching posts before a nine-year stint at the Copenhagen Institute for the Blind; then later on accepting a Professorship at his alma mater, the Royal Danish Academy of Music, where he was an influential pedagogue. Apart from his didactic pursuits Holmboe also worked as music reviewer for a local publication.

Holmboe produced an extensive portfolio of music (among them 12 symphonies, 3 operas, 3 chamber symphonies, 13 chamber concerti, 14 motets, a “Requiem for Nietzsche” and 20 string quartets!); and his music is marked by a profound respect for traditional (classical) forms, a staunch observation of strict counterpoint and a highly-personalised mastery of instrumentation. He was never an avant-gardist, due to his solidly conventional musical upbringing, and it shows in his music’s adherence to structure and tonality. His idiom can be said to be fairly neo-classical, with echoes of Bartók, Hindemith and Stravinsky.

The present disc compiles four different orchestral works defined under the collective heading ‘Symphonic Metamorphoses’, and were written between 1954 and 1972. The sleeve-notes inform us that the idea of “metamorphosis” was central to the composer’s aesthetic convictions: ” metamorphosis in addition to varying its material, it has a goal; it brings order to the process and enables it to create a pattern of the same perfection and balance as, for example, a classical sonata. Just as (the latter) is the expression of an idea with close correspondence to the thoughts and conceptions of the time, so metamorphosis is also a characteristic expression of our time “. In Holmboe’s compositional practice, his idea of metamorphosis invariably begins and ends; in contrast to the variation form, where at every turn it is altered until it eventually returns to its starting point. “Every link in the process must clearly be an unavoidable necessity and eventually, to a decisive extent, point towards the final transformation.”

Epitaph was composed in 1954 and dedicated to the BBC Third Programme, where it was first performed by the BBC Symphony Orchestra. It is in three movements: Allegro con fuoco; Andante tranquillo – Pi mosso Lento – Andante; and Allegro con brio. A loudening trill in the violins introduces, in the very third bar, the basic motivic material of a descending minor second and third followed by an ascending major second accompanied by blazing trumpets and a battery of percussion. Thereafter the motif is again heard as a thematic subject on the strings dark, almost war-like in its intensity where it is later continually transformed into various guises and passed around the orchestra. The middle section is more subdued, but still intense, as the motif expands further – returning in the violins’ high-register; thereafter churned by tutti-strings in the recapitulation, punctuated by massive forces of brass and percussion. In the final passage the music descends to a calm, where the metamorphosed motif remains a throbbing memory in the strings. 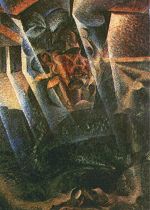 The second movement begins where the first left-off: the sustained cadence note opens a tranquil night scene; and the oboe sings the poignant thematic subject. “Swimming” strings introduce the agitated middle section, transforming the initial single-melody into interweaving contrapuntal strands. In the recapitulation the original theme returns accompanied by ostinato bass-figures, as the music adopts a Bartókian ambience. A sighing flute ends the movement in suspended finality.

The Hungarian’s shadow looms large in the final movement, as the main theme opens in the strings, dotted underneath by trumpets. It extends into a gentler, lyrical section; before intensifying into passages bombarded with snare-drum “gunfire” and brassy battle-cries, calling to mind another composer central to the northern European composers Shostakovich. The trill which had opened the work now returns, arching away into the plaintive oboe-solo from the previous movement, then languishes into silence.

Monolith, second in the Symphonic Metamorphosis series, calls for smaller forces than its predecessor. Bass drum and timpani beat the proceedings to life, introducing a fragmentary motif on strings, followed by trombones. Growling basses urge the motif to the horns and oboe, before it is taken up elsewhere. A trumpet call signals the reappearance of the subject, this time slightly extended, and brass chorales close the section. A solo flute lures in a gentle motif from muted violas interrupted by pizzicati and woodwind figures; and whispering strings heighten the suspense. The drums burst forth again, recalling old material, this time in tutti; as the music comes to an abrupt close.

The lengthy Epilog is, I personally feel, the least successful in the series the motivic developments are blatantly unsubtle, and (in its entirety) perhaps a tad prolix; moreover, it ends contrary to the composer’s own certitude in the initial, unchanged motif. The beginning is coloured with a dark, Sibelian atmosphere; and the celli and basses growl the three-note motif which recur constantly throughout. This one-movement work goes through a series of “mood-swings”, each time characterised by the motif or its variant. The agitated sections call for violent tutti-strings and brutal brass/percussion injectures; in their milder counterparts, woodwind dialogues sprinkled with tinkles on tuned percussion. Near the finale is a militaristic section preceded by a hymnic passage for strings.

Tempo variabile is perhaps the most interesting in the collection: it is in four separate sections, linked to one another by a bridge of reiterated notes. The pastoral first movement, Tempo incostante, starts off impressively sforzandi; and the subdued character of the piece contains charming woodwind chatters amid whirring strings. A warm and lyrical theme on the viola/celli precede the bridge to Tempesta, a movement (as its title suggests) depicting a violent storm. Here shrieking strings combine with trumpet-blasts to evoke the tempestous mood, and chromatic cello-figures add to its flavour. 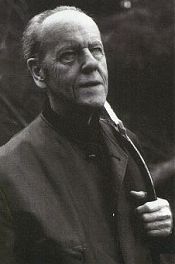 A quick descent ushers in Tempo calmo with its Bartókian motif on the celli and basses. Rising strings sing an extended lyrical passage, before the warm viola/cello melody returns, coloured by woodwind counter-subjects. Arabesque figures on the flute/piccolo set the ground for a stuttering motif on strings, before the lead-into a passage of shimmering violins and woodwind. An intense, tutti-flourish brings the work to a close; driven relentlessly by vigorous strings/brass passages.

The above notes do not describe the music alone, but also aspects of the performance they are what listeners can expect to hear. An additional remark about the performances: generally quite impressive for a provincial Danish orchestra, although nothing immediately outstanding likewise the interpretation. Their current principal conductor, Welshman Owain Arwel Hughes, prefers suppleness; although, in my humble opinion, I think there is too much flexibility here.

This is my first first acquaintance with Holmboe’s music; and therefore cannot yet sum up his merits as a composer; or whether this disc would serve as a reliable introduction to his music. My impression hereafter of Holmboe’s style, is an unhappy mix of Bartók, Shostakovich and the neo-classicists. Perhaps some of his symphonies would fare better for the beginner but that’s another story.

Chua Guan Ee is convinced that Denmark is synonymous with butter-cookies and babes!

“Unlike the variation form, the metamorphosis aims at a particular goal. It must reach completion in one way or another. Either death or eternal life, if I may put it like that. Variations alter and eventually turn around and end up where they started again. In a metamorphosis, like in sonata form, it must all lead somewhere. But I cannot accept that one is not allowed to repeat oneself, so I try to do so. This must naturally come from the material itself – it is to extend the repetition. I am tired of ideas and principles; they are the work of the Devil – they always lead to academic wickedness.”