The Brahms Violin Concerto, together with the Beethoven Violin Concerto are the two heavyweights of the violin concerto genre, and are both essentials in any violinist’s soloist career. Both have been recorded time and time again, and in this issue Nikolaus Harnoncourt and Gidon Kremer challenge themselves to say something new about the piece. The Double Concerto is also included in this CD, with Clemens Hagen on the cello. By chance, this is also the same coupling as the one with Menuhin and Furtwangler (EMI Rfrences CDH7 63496-2).

Straight to the point then. Does this recording present the listener with new ideas? In a word, yes. In the lengthy program notes, the various artistes’ points of view about the works are mentioned briefly. One is this, that Brahms is depicted as a fat man much of the time and that his music can also be played in a not-so-fat manner. For me this seems to be the focus in this recording.

The Concertgebouw is never in less-than-fine condition, and they play the orchestral tuttis note-perfect, unlike their Viennese counterparts who manage to have sour intonation a lot of the time. The orchestra’s playing is tip-top; what Harnoncourt seems to want to do however is to present the tuttis in a more light manner — valid certainly, but it’s always been said that the proof of the pudding’s in the eating. Does it work? I’d say yes, but I prefer the so-called heavy approach anytime.

Kremer’s playing has far more personality than many of the players we get nowadays. I’d love to hear Sarah Chang’s Brahms, and I’m sure she’d do a very individual interpretation of it. But this personality is, I feel, a little without a stamp of authority. I don’t know how to put this in words — but anyone who’s heard Kreisler‘s Brahms Violin Concerto recording with Leo Blech and the Berlin State will understand this immediately. Kreisler puts a resounding stamp of his personality on the concerto, while retaining the essence of it.

Technically speaking Kremer’s playing is unfaultable. His tone veers rather to the thin and is not particularly of the sweet variety. I’ve never understood why the sweetness of his tone has been talked about so much, but it is indeed unique. If you have heard Kennedy’s latest Elgar Violin Concerto recording (reviewed here), you’ll find this tone similar to Kremer’s. This has got to do with the amount of rosin applied on the bow, and both artists seem not to use so much rosin.

But back to the recording. Harnoncourt proved a little disappointing in his baton-waving. Two of my friends found his conducting very impressive, but I found it rather less than spiritual, I have to say. Perhaps I’m a little heavy-handed here, but I found it in fact rather ordinary. Well, to each his own, as always.

I didn’t find the Beethoven Violin Concerto effort between Mr H and Mr K (also on Teldec 9031-74881-2) to be revelatory at all, although I appreciated the really clear sound by Teldec. This recording shares these same two points. The engineering itself is nicely done. The listener’s position would be about 10-15 metres away from the performers. In no part of the recording does the orchestra swamp the violinist. Nice work on the engineers part!

The Double Concerto with Clemens Hagen of the Hagen Quartet (a fine setup, by the way. Their Ravel-Debussy-Webern quartet disc is impressive.) is rather more interesting. Hagen seems to be the one in possession of a pungent personality here – Kremer tries to imitate his playing always, and with good effort. Hagen’s experience in playing chamber music shines through here. These are two artists who admire each other, it seems. 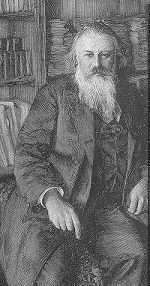 The chamber music quality of the concerto is emphasized, although I think that the first movement is too “big” in character for this to work really well. The second movement is wonderfully played. The third is playful, though it manages to drag. The Rostroprovich/Oistrakh effort is still unforgettable in this concerto. Someone said that the writing in this piece is as if for an eight-stringed instrument with the violin and cello’s combined range. Rostroprovich and Oistrakh are truly one in spirit in their recording with Karajan, easily available on EMI (CDM5 66219-2).

Harnoncourt finds more kinship with the Double Concerto, which he played with his wife, Alice when they were younger. (Alice plays the violin, Nikolaus plays the cello and gamba) In the Violin Concerto, his tendency to play up the “slimmer” Brahms doesn’t work so well. In this case Kremer uses the Enesco cadenza. Georges Enesco (1881-1955, or Enescu) was a composer as well as a brilliant violinist (he taught Menuhin) and his cadenza is fresh to the ears. (My favourite cadenza is still Kreisler‘s – a perfect blend of music and virtuosity.) Kremer’s playing is never fierce, and I hesitate to say this, but to my ears he sounded a little little uninvolved.

In sum, a recording to listen to a few times and leave on the shelves, and wonder why with such forces the Violin Concerto could not sound much better. The Double Concerto is much better, and could be reserved for the alternative reading. That concerto takes the “chamber”-slim style rather better. What a pity Kreisler never recorded the Brahms Double!

If you are in Singapore, this disc can be ordered easily from Sing Discs (Raffles City), Tower Records (Pacific Plaza & Suntec City), Borders (Wheelock Place) or HMV (The Heeren).

Derek Lim has so many historic recordings he no longer needs a time machine.