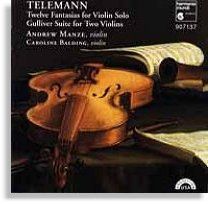 Johann Sebastian Bach is the most famous of the Baroque period figures in music, but Georg Philipp Telemann comes a close second to him. Being listed in the Guinness book of world records as being the most prolific composer ever, he is said to compose a cantata every week and wrote music in all musical forms that existed in his day. Of course, this statistical fact does not imply that he is a good composer, but it does speak “volumes” about his talents.

The fantasia form seems to be one that Telemann (below left) liked to explore, and the notes of the CD tells us that besides this dozen for the solo violin, he also wrote twelve for the flute and the viola da gamba, plus three dozen for the harpsichord. The fantasia consists of three- to four-part themes which ranges from largo to presto, which unite together subtly to form a whole.

Polyphony in the Twelve Fantasias for Solo Violin without Bass (XII Fantasias per il Violino senza Basso) is not as developed as Bach’s famed Sonatas and Partitas for the solo violin, but instead there is a conversation between the bass and melody line, using the different strings of the violin to create different voices. This effect can be recognised right from the first Fantasia, where the G and E string of the violin is used alternately to answer each other in the movement, in contrast to the outright counterpoint use of chords in the fugues of Bach’s solo violin music.

The fast movements always have a touch of spirituoso in them, sustaining exciting momentum by further developing the main idea before a recapitulation of the original theme, as in the Allegro of the Seventh Fantasia. Then, there are slow movements that are juxtaposed between the more lively ones. Sometimes, these are just a short phrase played softly in andante pace that comes after the allegro, like the line of silent monologue of the violin after the exposition of the Fifth Fantasia. In others, they are adagio parts having a prominent place in the piece.

The Eleventh Fantasia is an example of the development being led by a gentle and graceful theme, which makes up half of the whole fantasia and is further more repeated immediately after a change in motif. Unlike Bach’s music, there is no extensive use of doublestops for counterpoint melodies, and the music is quite simple technically speaking, with almost all the twelve Fantasias playable on the violin without a shift of position from the first.

Admittably, the Fantasias are not pieces with intrinsic value for the violin virtuoso, nor are they anywhere near the greatness of the Sonatas and Partitas for the solo violin by Bach. But in my opinion that does not mean that they lack musical value. They are baroque violin music of a different sort altogether, and Telemann’s contribution to the violin repertoire with these seems to be a development of the Vivaldi style with their similarities. Where Bach seems to be exploring the possibilities of the counterpoint on the violin by looking from the perspective of an organ player, Telemann is more concerned with musical ideas that are more organic in nature.

The music of the Fantasias originates from the custom of Baroque violinists improvising music for their instruments. Written in this spirit of invention, this is meant to be impromptu music-making, in contrast with Bach’s “more predetermined” musical structures. This is the reason why the Fantasias are more melodic in inclination, sounding fresh and charming. Given that such an art has been lost so long ago, it is quite amazing to have these Fantasias from Telemann surviving till now to give modern musicians a chance to catch a glimpse. But then only a performer who dares to try spontaneous playing can really catch the spirit of this music and do justice to it. 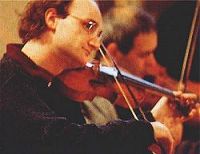 Fortunately, Andrew Manze is up to the task in this recording, being a skilled exponent of the baroque violin music repertoire already. To say the least, Andrew Manze really takes the baroque style of playing to extremes of the generally accepted perception of such music being consistent in tempo and dynamics. He certainly seems to be more than willing to take risks, playing the Fantasias in a maniacal fashion for some movements and then expressing the slow parts with a totally clear violin tone and adopting tempos approaching largo. His almost schizophrenic account of the Fantasias gave me new insight to how baroque music can be interpreted and rediscovered all over again, when the rare performer comes along to defy conventions and play the way that he feels it should be done.

Andrew Manze follows exactly the spirit of spontaneous playing in which these pieces are composed in. Tempo markings in the scores are sometimes dismissingly ignored to suit his interpretation, and are almost always faster or slower than what the markings usually imply. For example, the Fifth Fantasia starts with a long phrase of semiquavers that would no doubt be found wanting in excitement if played strictly in time, with the score not giving any interpretive help. But Manze starts the passage soft and slow, building up momentum with an increase in volume and tempo within a few bars to reach a climax that makes me feel as if the violin string can stand no further pressure from the energy that explodes out. Conversely, the Elventh Fantasia is played in a serene manner which brings about a touch of wistfulness in the music, changing the “poco vivace” marking to create a meditative and peaceful atmosphere in the music instead.

I suspect that the sparse indications in the score and the total lack of dynamic markings is proof that the music should always be performed uniquely by each performer, and here Manze does excellent service to it. His characteristic style of playing, with expression rather than with formality, is displayed throughout the recording. In almost every Fantasia there are decorative baroque ornaments littered all over, creative improvisations on the score and no repeats are played in the same manner as the previous time. He has certainly stamped his mark and personality on the music to make it special and call it his own.

The Gulliver Suite for Two Violins give additional value to the recording with Caroline Balding playing the duet with Manze. (Given the length and quality of the Fantasias, this is quite a bonus to a 78-minute disc). A charming suite in five movements, it attempts to illustrate the novel of the same name with music. Thus, the Lilliputians are given a chaconne with fast notes and spritely rhythm, the giant a gigue with an awkwardly slow gait to it.

The sound of the two violins match perfectly and one wonders if Manze is playing both parts himself, as Heifetz once did for a recording of Bach’s Double Violin Concerto. The cavorting Dance of the Yahoos with the serenade of the Houyhnhnms form an unusual harmony in the last movement, delightful music to end this exceptional recording full in style.

A full range of Harmonia Mundi records can be found at HMV (The Heeren). You can also buy Harmonia Mundi CDs in Singapore from Borders (Wheelock Place)