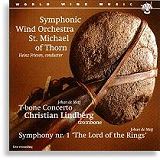 I am always on the search for compositions and recordings of wind band music of exceptional calibre to convince skeptics that the medium of the wind band is certainly not inferior to the orchestra’s. The wind band is still a young form but it has developed in the past few decades with the efforts of great musicians such as Percy Grainger, Gustav Holst and Vincent Persichetti.

This symphony by the Dutch composer Johan De Meij (b.1953) is yet another milestone for the wind band repertoire. As performed here by the Symphonic Wind Orchestra of St. Thorn in a live concert, the levels of musicality and virtuosity reached undeniably places the ensemble in the league of world-class music-makers.

The Symphonic Wind Orchestra of St. Michael of Thorn is a Dutch ensemble founded in 1863 and boasts of an unparalleled achievement of winning three times in the most prestigous musical event for wind bands – the World Music Contest held in Kerkrade (The Netherlands) once every four years. The ensemble’s repetoire ranges from classical transcriptions of Mahler, Respighi, R. Strauss, Orff and Varèse, to music of renowned wind band composers like Hardy Martens and Alfred Reed. Under the leadership of renowned wind band expert Heinz Friesen, we expect nothing less than the best from this potent collaboration.

The T-bone Concerto is Johan De Meij’s latest contribution to the wind band repertoire and features here the internationally acclaimed Christian Lindberg (left). Within expectations, it is an excellent concerto but with the too characteristic De Meij touch observable by listeners familiar with his work.

For example, in his Second Symphony “The Big Apple”, De Meij uses minamalist ideas, most obviously in the rhythmic syncopations in the first movement. In the T-bone, he begins with a simple rhythm, which through sub-division of the notes develops in complexity. It rushes to a climax and is really quite exhilarating! Then there is his very tasteful use of the brass, relying on great harmonics to create a majestic sound rather than demanding a the usual forceful, blaring, brassy tone that is quite prevalant in say a Rossini Overture.

According to the notes, the three movements are after how a T-bone steak is prepared! “Rare”, “Medium” and “Well-Done”! How relevant that is the notes don’t say (and I do not know), but there is that element of increasing difficulty for the soloist. The first movement is a “warm-up” compared to the all-out finale! De Meij uses his own experience as a trombonist to construct the piece, demonstrating the trombone’s ability to sing sonorously and the technical virtuosity required of the soloist. I love my steaks medium rare and I totally adore the sublime second movement!

De Meij also creatively uses the accompanying wind band as he scores the first two movements in a neo-baroque style and the third like a chamber ensemble with harpsichord. The finale of this concerto must be one of the most triumphant musical moments ever written for wind bands. The Wind Orchestra of St. Michael of Thorn under the leadership of Heinz Friesen provides a perfect accompaniment for Mr. Lindberg to effortlessly sing the daunting high notes and tackle the technically challenging runs on the slide trombone. His musicality and technical proficiency tells us beyond a shadow of a doubt why he is such a successful (perhaps the only truly successful) trombone virtuoso.

The Lord of the Rings won the Sudler International Wind Band Composition competition in 1989 and is one of most popular works for wind bands all over the world. It is a programmatic work based on J.R.R. Tolkien’s classic trilogy of novels of the same name. While I’m tempted to elaborate on the ingenious musical interpretation of the characters and the tale, I must restrain myself to a brief intro to whet the appetite.

The first movement is a musical potrait of the wise and noble Gandalf (right), the wizard who takes us on a ride on his beautiful grey horse, Shadowfax. The second movement, Lothlórien (The Elvenwood), is an impression of the beautiful and lush Elvenwood and also paints the picture of the hobbit Frodo with the lady Galadriel.

The ominous ending signifies the last of Frodo’s three visions: the great Eye, a foreboding omen. The Gollum (Sméagol, represented on the soprano saxophone) whose cherished treasure, the Ring, was stolen from him is malicious and yet pitiful. It continually searches and laments for his lost treasure.

The fourth movement, Journey in the Dark: “The Mines of Moria” – “The Bridge of Khazad-Dûm”, describes the Fellowship of the Ring’s laborous journey to seek the destruction of the Ring. Gandalf is engaged in battle with the horrible Balrog, which defeated, crashes from the bridge of Khazad-Dûm into a fathomless abyss.

The last movement is a folk dance which expresses the carefree and optimistic Hobbits. The ending of the Symphony is not exuberant though, as it captures the final image of the trilogy where Gandalf and Frodo sail away in a white ship, slowly disappearing into the horizon.

Most impressive are the sounds of the symphonic brass of the wind orchestra as they produce a magnificent tone while not being overly brassy and handle the many difficult passages with great ease. The soprano saxophone solo is both wicked and sad. Even more impressive is how De Meij’s ambitious creative

efforts seem justified by the superb “feel” of the musicians, thus allowing this programmatic work to achieve its ultimate effect in the musical re-telling of Tolkien’s epic.

Johan De Meij’s talent is clearly evident and in producing a work like this for his first symphony. The future is very bright for him, as well as – fortunately – the repertoire of the wind band.

After writing such a glowing review for a piece of music and its performance, I can only hope it might motivate a few to listen to it. There is much more in the music of wind bands that we might hope to explore. And for those who might join me….watch this space.

Adrian Tan is an avid supporter of the courtesy campaign on the net… Smile as you surf! Courtesy begins with your PC.