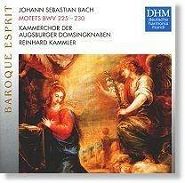 This may be a budget recording compared to all the others in full and mid-price. However, this recording is certainly no push over. It boasts good quality sound and admirable acoustics and as an alternative to the other versions which replaces trebles with sopranos, this authentic treble version is a welcome change. Other versions utilizing trebles include an early 1960s Tlzer Boys Choir recording on a Philips label which has not been released on CD and is no longer available. Fortunately, I still have a cassette recording of it.
Admittedly, trebles in general do not deliver their lines with the same flair that accomplished sopranos are quite capable of. In addition, they are often accused of being uninvolved with the music emotionally. Nevertheless, trebles in an established boys’ choir are often better trained and technically more competent than many sopranos in adult choirs. Trebles undergo stringent training programs and the few treble choirs that are world famous have every reason to be where they are – among the best.

The Kammerchor der Augsburger Domsingknaben trebles are natural and they deliver their crystal-clear voices with first class control, tossing high notes off with finesse and ease not apparent amongst sopranos in a lesser class. Choral singing is also achieved with clean and clear lines, harmony is tight and full. Intonation flaws are few and far between.

There are quite a few moments where one wishes for greater precision of execution. The direction of these boys seem to lack insight for there are parts when one feels that these masterpieces are treated as mere vocal exercises. Yet, the many moments of tight control and great understanding of the Bachian line proves to me beyond a doubt that my feelings are unfounded. This is a recording as worthy of a listen as any others that I have reviewed so far.
In addition, there is a certain quality in these treble voices that strike me deep down. They sing fearlessly. The great difficulties are conquered without any signal of internal struggle, nor of strain or tiredness, and certainly without any fear. The treble voice boasts of these qualities not found in the adult voice. Though the reason for using boys instead of women may have been a social one, Bach must have understood this quality of the treble voice. Bach writes for the voice as if it was an instrument with inexhaustible breath and dexterity. Surely, he meant them to be sung by angels.

Knowing this, the small imperfections are readily forgiven and the spirit of the music – in their original intentions, come to life in this recording.

NG YEUK FAN is jealous of all these treble boys…