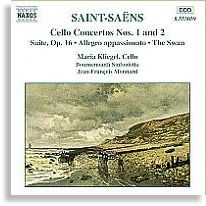 Charles Camille Saint-Saëns (below) is a bit like a French Mendelssohn – prodigy, composed efficiently and effectively (Piano Concerto No.2 in 17 days), admired by many contemporaries, did many good musical deeds – and yet, never seeming to be revolutionary enough to catch the attention of the present general public. Saint-Saëns lived long and far enough to even contribute to the film music repertoire. By age ten, he was already giving recitals of all 32 of Beethoven’s piano sonatas. “His skill lies in having the good sense not to involve himself in problems beyond his technical ability,” said Ferruccio Busoni of Charles, “And to climb a precipice of thought with an elegant gesture.” 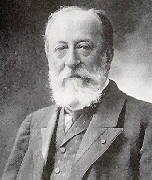 As far as the cello is concerned, Saint-Saëns is known for the beautifully sentimental “Swan” of the Carnival of the Animals, and the Cello Concerto. He correctly predicted that the Second Cello Concerto (D minor, op.119, 1902) will never be as (well-)known as the First (A minor, op.33, 1872). Anyway, Naxos has conveniently provided the perfect solution to this gap with this collection of both concertos and orchestrations of three popular chamber pieces.

Both concertos follow the Lisztian idea of each work as a single whole subdivided into separate sections. This is further reflected in the close fusion of the solo and orchestral parts, without the typical “markers” of orchestra-solo-orchestra-solo-orchestra segmentation. My guess is that this, like Liszt’s piano concertos, may have contributed to their relative lack of popularity.

The German cellist Maria Kliegel, who has done many fine records on Naxos, is a fine soloist throughout. Her performance of the Cello Concerto No.1, op.33 is musical and often very amiable in tone. Her choice of mood in the first movement is rather cool, lacking fire. There isn’t much of any Germanic Romanticism to plumb here, but where Kliegel is most appealing is in the sweet pastoral intimacy heard in the middle Allegretto con moto. This is followed by a sorrowful and noble Allegro non troppo, reminscent of Mendelssohn. Here, the orchestra and soloist display an impressive clarity and strength in their performance, which is carried on in the Suite.

The First Cello Concerto is for me the least interesting thing on this disc. The Suite, op.16 (1862), on the other hand, is a total delight and should interest many cellists. It begins with a pensive Prlude of the winding “perpetuo” variety, punctuated by the woodwind, finishing with a quiet wink. This is followed by a Srnade, in waltz time, of simple grace and beauty. The Gavotte is a French dance, skipping with almost mock seriousness, reminding me of Bach. The 6-minute Romance is the longest movement, played “Molto adagio”. The Suite ends with an exciting and assertive Tarantelle. Originally for cello and piano, the orchestration by the composer is distinguished by many fine touches (especially in the woodwind) and deserves to be heard more in concert halls.

The Cello Concerto No.2, op.119 is generally considered more virtuosic than the First but “lacking in melody”. It is a two-movement affair and actually I found it much more interesting than the First (or maybe it’s because I love the key of D). Kliegel (right) seems to display much more conviction here as well, playing both the lyrical and technically difficult parts with close understanding and very impressive skill. Try the hectic second movement. This concerto is not widely available on record and boy, Naxos has done it again – providing us with such a fine one at such a good price!

The popular 4-minute Allegro appassionato in B minor, op.43 of 1875 was also orchestrated by Saint-Saëns, and here again enjoys the best qualities of the performers mentioned above.

The attractive collection ends very satisfyingly with a truly gorgeous performance of the Vidal (but not Sassoon) orchestration of “The Swan” from the Carnival of the Animals. The unfailing combination of harp, cello and string orchestra is a refreshing break from the “main course” of the disc. Kliegel obviously relishes the music (you can hear her sharp intakes of breath), with its sensuous harmonies and that famous yearning melody. The chordal climaxes here are (put your hand on your chest) – heart-stopping. The harp is obviously spot-miked – but effectively so! No prizes for guessing which button on my CD player I pressed after this track ended.