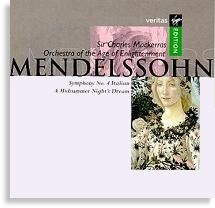 Symphony No.4 in A major, “Italian”
Overture and Incidental Music to A Midsummer Night’s Dream The Orchestra of the Age of Enlightenment
performing on period instruments
conducted by Sir Charles Mackerras 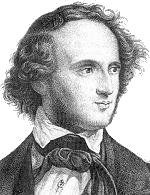 By 13, Mendelssohn had already composed twelve superb string symphonies; and by 17, the fabulous string Octet and, inspired by Shakespeare’s play, the sparkling and humorous Overture to A Midsummer Night’s Dream. Doesn’t that make all of us useless 20-plus-year-olds utterly ashamed??

The Fourth and the Incidental Music to A Midsummer Night’s Dream are two of Mendelssohn’s most delightful works — for many good reasons which I need not further justify. I recommend this disc with all possible enthusiasm not only because of the superb playing, phrasing and sense of enjoyment, very characteristic of the intelligent conducting of Sir Charles Mackerras, but also because of the surprising benefits of listening to Mendelssohn on period instruments. Yup, there I go again – the Orchestra of the Age of Enlightenment (OAE) uses instruments of the 18th and 19th century make.

At first, I thought there wouldn’t be much difference, and bought the disc because of Mackerras’s involvement. But listening to the distinctive woodwind, the crisp and raw percussion, the skittering strings, the uninhibited blare of period brass and most of

all the guffawing laugh of the ophicleide (an ancestor of the modern lower brass, pictured left) – I realized again how much music from even this late period is aided by the extra clarity of instrumental lines that only a carefully-assembled period orchestra can achieve. I said that Mackerras is an intelligent conductor because even when he conducts a modern orchestra, he keeps very careful tabs on orchestral size and textural clarity. This 1988 recording is reproduced in clear and sparkling sound.

Keep in mind that both Berlioz and Mendelssohn deliberately included a part for the ophicleide in La Symphonie Fantastique and A Midsummer Night’s Dream, respectively. The former because he wanted a raw, ominous-sounding instrument and the latter for – well – humour. The ophicleide has a boomy, bold voice, not at all like the mellow tuba, but more woody and gruff. Felix obviously thought that it fitted the funny antics in the “Dance of the Clowns” (Track 11). The ophicleide has a bashful but sincere effect, rather like a shy gentle giant; and makes the tuba, used in modern performances, sound far too civilized and humourless by contrast.

The Scherzo, a woodwind-killer, is delightful if a touch dry of tone. Even the strings have a lot of fun! And don’t for a moment think that a French horn made in 1830 cannot sound beautiful in the Nocturne! 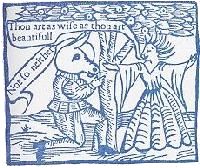 I was not looking forward to hearing the famous (clichd?) “Wedding March” (yes – that’s the one), but once again, I was caught by surprise by the freshness that Mackerras brought to the score.

It is played briskly, but without a hint of hastiness, and if instruments can convey wedding joy, the brass fanfares here succeed brilliantly. A very festive performance, right through to the final chords. The same sensitivity is instilled in the performance of the symphony – the opening Allegro vivace is celebratory and joyous, the Andante (the so-called “pilgrim song”) singing, a little quicker than many may expect, but again it does not feel rushed.

Flora, a detail from Botticelli’s Primavera (“Spring” c.1478) graces the cover of this disc from the excellent Veritas Edition series. You should avoid it only if you absolutely cannot stand the sound of period instruments – but by all means hear it first. If not, collectors who already own the music in modern instrumentation can learn a lot here.

In 1997, in the midst of the celebrations for the 200th birthday of Schubert and 100th death anniversary of Brahms, let us not forget that 150 years ago a Jew who returned to us the genius of Bach died, tragically, at the age of only 35.

In Singapore, this disc is available at or can be ordered from Tower (Pacific Plaza & Suntec City) and HMV (The Heeren).