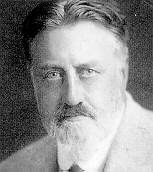 Sir Granville Ransome Bantock (right) was an active promoter of music, including that of his native England, throughout his life. An outstanding educator of a wide range of music, Bantock was also Principal of the Birmingham and Midland Institue of Music (1900-1914) and Peyton Professor at Birmingham University from 1908-1934, in succession to Elgar. A champion of contemporary composers such as Debussy, Richard Strauss and particularly Sibelius (whose Third Symphony is dedicated to him), Bantock was a composer of large-scale music, such as these symphony-tone poems presented here. Although the period of his life spans the core Modernist periods, his music is completely accessible, full of easily remembered melodies of great Romantic lusciousness and modern epic scale.(Some biographical information extracted from notes provided in CD sleeve by Michael Hurd.)

The disc begins with the serene and misty strains of the Celtic Symphony (1940), full of distant yearning, surging softly, caressing the ear with its sweepingly hushed Lento sostenuto (slow, sustained) introduction [1]. This is music of real beauty. It develops like a typical symphony, with a following Allegro con fuoco section [2] leading into a gently surging melody of seascape beauty. Based on the Hebridean folksong An Ionndrainn-Mhara (“Sea-Longing”), the Andante con tenerezza section [3] is likewise full of melancholia…

Sore sea-longing in my heart,
Blue deep Barra waves are calling,
Glides the sun, but ah! how slowly
Far away to luring seas!

A vigourous dance [4] of the Highlands takes over the orchestra of 7-part strings and 6 harps, before the opening theme returns [5] in full voice, harps unobstrusively colouring the score. Undulating like the grand seas which surround the Isles, the Symphony sails with epic song into the climax of the work, an awesome glissando solo for the harps.

The harp is one of those ‘legendary’ instruments which still does not fail to evoke beauty and grace, not to mention bards and myth. Resplendent with six, the Celtic Symphony may seem to be over-indulgent in its scoring; but believe me, I bought this CD five years ago, and the breathtaking effect of this sextet of (about) 280 strings has never worn off! Play it to someone and watch his/her reaction! Even if their solo is nothing more unusual than an ascending and descending series of glissandos, it is music of genuine beauty.

The Witch of Atlas (1902) is like Bantock’s version of Debussy’s Prlude L’Aprs-midi d’un faune. With the Romantic outpouring of Shelley’s lines, this is luscious “fairy” music depicting the forest, spirits and beauty of the “lady-witch there lived on Atlas’ mountain”. The only “violent” sections hint at the darker powers of the lady (er, not the cackling, broom-equiped kind). At times reminscent of Gounod, at other times, perfumed a la Debussy, at others full of striding brass, in all this 15-minute work is music of evocative tone-painting, very suited to concert performance.

Speaking of performance, the Royal Philharmonic Orchestra play splendidly under the able hands of Vernon Handley – it’s hard to fault such well-established performers. The brass is expert, the woodwind and strings beautiful, percussion unobstrustive. If there is a slightly disconcerting twang from one of the harps in the Celtic Symphony during the big solo – I sort of don’t blame them! It remains a beautiful climax to a unique work, rarely performed because of the obvious problem of logistics! The recording, made in 1990, is satisfying quiet – you will probably need to jack up the volume for the opening of the Celtic to hear everything, though. Hyperion sensibly divide the larger works into multiple tracks – something I appreciate very much.

The Sea Reivers (1917), clocking in at 3’44”, is a moderately paced but excited scherzo which is speculated to have been intended to be a part of the Hebridean Symphony. Heroic and brassy, this is in itself quite a marvellously powerful score.

The Hebridean Symphony (1913) is a vast 35-minute tone-painting which in a single continuous movement depicts Hebridean seascape, epic sea-battles, questing love and yearning nostalgia, all ending in a bardic “Song of Victory”. Consisting of violin solos, harps, windy musings, brassy outpourings, booming basses – I think it would have made Wagner proud. In the introduction [15], there are many humming, hushed sections worthy of Sibelius’s hallmark pedals – over these, solos from violin and horn hymn quietly but intensely as the music develops into what the notes aptly describe as “a Tristan-esque outburst of great splendour”. The buildup towards the storm [18] is very impressive in its ominous excitement, punctuated by timpani and brass. All the more majestic its leading to the opening theme of the heroic “Kishmul’s Galley Song” on horns [19]. A mighty description of war with trumpets repeating a 3-note motif is later followed by a tragi-heroic final section based on “Harris Love-Lament” [22], which culminates in an epic hymn of victory, full of brassy splendour, before everything slowly fades into the distant silence.

Click here for “Land of Heart’s Desire” and more songs from the beautiful Hebrides!

This disc is available at or can be ordered from Beethoven Record House (Centrepoint), HMV (The Heeren) and Borders (Wheelock Place).

Chia Han-Leon has never tried to learn to play the harp, although he has some experience putting one back into its case. He is a fan of Dexter’s Lab, Taz and Eek! the Cat.

Back to the Classical Index!… or read more English music reviews from the Inkvault!