Simphonies & Fanfares from the French Baroque 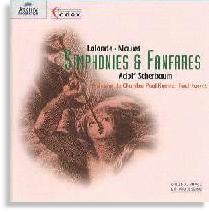 Sometime in your life, you’d probably attended some kind of parade or other open-air public event where tradition demands that the ear, not to be distracted by the noise of thousands of voices, be filled with music. Take for example, here in Singapore, we have things like the National Day Parade, and if you didn’t bother to queue for tickets, the SAF Recruits’ Passing-Out Parade (still a rather amusing title). 90% of the time, what do the organizers choose to broadcast over the air? Kenny G. Now, you may be a big fan of the saxophonist, but I’ve always felt that the sentimental character of such music really does nothing for the atmosphere of the event other than to fill the air with some vague and harmless sound.

Really, why not try something a little more upbeat and sunny? Like the first suite of fanfares of Mouret, with its jubilant trumpets and drums over a dancing choreography of strings, beginning with the famous opening “Theme from Masterpiece Theatre.” Or for those with a taste for Water Music, the second suite of simphonies (“played at the Town Hall before the King”), cast for horns, oboes and strings. A short break for the trumpets there – and then, back they come, in De Lalande’s suites “which were played every fortnight during the suppers of Louis XIV and Louis XV.” The legendary grandeur and ostentatious wealth of the Sun King are of course well-known. Listening to the volume and brilliance of the music in these suites, I found myself thinking about the menu of the feast. Well, some aspects of French cuisine haven’t really changed.

Much of the music lasts under 2 minutes — but then this is a 41-track CD. The contents of De Lalande’s Fourth Suite range from trumpet fanfares (some with a playful touch of echo, which evidently amused and delighted the Baroque senses), slow dances, ballet pieces (one imitates the bagpipe) and even the occasional song for the soprano. An interesting alternative to watching Wheel of Fortune (“Big money! Big money!” clap clap clap…) ,the Pyramid Game or the News At Seven while you eat dinner. The Sixth Suite is a particularly well-crafted work in the manner of the more inspired and bustling Baroque suites, with rushing string passages, light oboe-dances of the menuet variety, a touch of melancholy in the trio and a final Fierement with trumpets and drums.

A “March for Four Drums” by Philidor follows, after which the disc continues with the “Airs for Trumpets, Drums and Oboes” by Lully, the first composer to suffer Death by Conducting (he struck his own toe with his conducting cane – used in those days to literally beat time on the ground – developed gangrene and died of complications.) Nevertheless, his work shows originality and skill – a point for Louis XIV who chose his court musicians very carefully. The disc ends with another Baroque trumpets-and-drums favourite, the truly brilliant Prelude to Charpentier’s choral Te Deum, a famous tune used regularly for anything that requires a fanfare, from the opening credits for schools’ debates to marching parades.

The performances on the disc are spirited and adequate as a sample or for the non-specialist collector. Although the slightly boxed-in sound betrays the age of the recordings, there is no significant hiss at all. I would have prefered a greater degree of lilt and looser rhythms to the performances, injecting them with more of the pulse of dance. Listening to over 70 minutes of these works, mostly in the key of D (major), can prove to be very tiring indeed, but then watching the news on TV, mostly in the key of D (Death, Disaster, Diplomacy and Destruction), while having your dinner is even worse.

This disc is available at (or can be ordered from) Sing Disc Sounds (Raffles City), Tower (Pacific Plaza), HMV (The Heeren) or Borders (Wheelock Place).

Chia Han-Leon once appeared on TV, on National Day, dancing with a clarinet in military uniform. He does not, in fact, recommend handling your CDs while having dinner.

These are classic performances, which were cutting-edge for discovering the French baroque in the late 1960s and 1970s. I bought the Mouret album back in 1977, and I still have it. I also loved Kuentz’s album “Royal Fanfares at Versailles,” which introduced me to that magnificent prelude to Charpentier’s Te Deum. Historically-informed performance has developed enormously, but though I have lots of Christie and Minkowski and Rousset CDs in my collection, I love these Kuentz performances just as much as I did when I was 19. Now it’s only at Arkiv Music, but it’s well worth the price.