Seeing Double – An Interview with Chen Zhangyi | The Flying Inkpot

There is an inextricable link between music and literature, one inspiring the other, one lending voice to the other. Think of ‘A Midsummer Night’s Dream’, Vaughan Williams’ ‘The Lark Ascending’ or the whole canon of Romantic poetry for instance.

Earlier this year in April, the Stradivari Quartet, together with musicians from the Singapore Symphony Orchestra (SSO) premiered Singaporean composer Chen Zhangyi’s ‘Twin Cinema for String Nonet’. The piece for 2 string quartets and 1 double bass was inspired by Dr Sara Florian’s poem ‘The Lost Seasons’ which merges 2 poetic forms: the pantun from the Malay oral poetic tradition and the uniquely Singaporean twin cinema.

Aileen Tang chatted with both Chen as well as SSO Associate Principal Bass Yang Zheng Yi, who commissioned the work.

The Flying Inkpot:
Zhangyi, congratulations on the premiere! Did you particularly want to want to use this this twin cinema poetry form? Had you always wanted to explore a musical rendition of this form?

Chen Zhangyi: I’ve always wanted to write something like Mendelssohn’s Octet, but then I added the contrabass to make it a little bit different. Firstly, there is a symmetry in the twin cinema. We already have the Stradivari Quartet, and ideally, we want to have an even number of SSO players to match that. So there’s a dialogue with the four plus four, and I wanted Zheng Yi to play as well so I added the contrabass!
I came up with these points early on, a few days after the initial contact. The contrabass is kind of a pillar and line of symmetry. At that point, I didn’t know who the SSO musicians were going to be. Usually, I like to know who the players are as it gives me more ideas. But nevertheless, that was how the nonet structure came about.
This symmetry was designed to explore the relationship between the two overlapping ensembles – quartet A and quartet B – and that fits in the twin cinema structure obviously. There are two narratives  – one in each quartet – but you can also experience the narratives across the two quartets.

TFI: I was wondering about that! Because with the twin narrative in twin cinema, of course, you can read it across as one complete poem but you can also read the two sides independently as two poems. So is that the case also in your work? Can we just extract, let’s say, what the Stradivari Quartet plays and could that be a piece on its own? 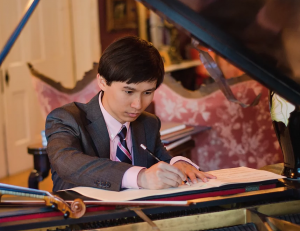 Chen: Yes, I think that that is possible! And in a way, the music is written that way, depending on which section or side is more dominant, whether it’s the main narrative or supporting. So, there can be different variations or different balances between the left side and the right side. The music works within each quartet, and it is definitely possible to experience it on the left side or right side alone. So that’s really the whole point of the twin cinema.

TFI: I think it’ll be really interesting to explore if you ever have something like a workshop or seminar where you delve deeper into this work. Looking at how, for example, this is quartet A and that’s quartet two, and how they come together and not sound as though there are two pieces clashing. Because they’re overlapping and not playing side by side. I think that’s really drew me to the piece when I listened to the premiere. Even though you said you were thinking about the Mendelssohn octet, your piece is not an octet in the same way, and it’s not a double quartet either; it’s two distinct quartets with a friend in the middle!

Chen: It’s written so that the counterpoint can work when they play together, but the point is still to experience them as independent entities even when they are playing together.

TFI: How literally did you take the text of this poem?

Chen: Not much of the content itself. It’s not so much of actual narrative of Sara’s poem, but more of the form of juxtaposed narratives. And because the title is Twin Cinema, I thought maybe if the music didn’t sound at least a little bit like a film score, it might make no sense at all. So I thought okay, the material has to sound a little bit film-scorey. I’m not a film composer but that was my take – like imagining two screens going at the same time. One side is playing…

Chen: And the other side has [2019 South Korean film] Parasite going on! So that was my thinking process when I was writing the music. These little visualizations were very helpful when I sketched the music. There are Vivaldi and K-drama references and juxtaposed textures – for example, with one side being very rhythmic and the other side legato. There’s also reference to temperature thing where we can think about the difference between Europe and Singapore – the frozen winters and the sunny, equatorial temperatures.
[1st violinist of the Stradivari Quartet] Wang Xiaoming asked me the most interesting question. It’s very lyrical and beautiful, but where is the climax? Almost like the twist of the film, where’s the twist of the narrative? So that’s where the middle section gets darker; the narrative reference is the movie Parasite and it then references the famous “stabbing” violin theme from Psycho.
And then, you know, when composers are facing a crisis moment with deadlines coming, we just take whatever extra-musical ideas we can to help generate more music! For example, maybe it’s the durian season in Singapore and so perhaps spiky articulations on one side, and then the other side is some kind of lilting gondola song! Of course, when the listener experiences the music, what the original intention was is perhaps not that important; what comes across musically is more important than the initial musical or extra-musical thought.

TFI: Let’s talk about what it means to be a Singaporean composer! I like to ask young people how they define what “Singaporean music” or “Singapore arts” is. Of course, they’ll immediately say it’s the National Anthem or NDP songs. Then I’ll ask, does it matter if the creator of that art is a Singaporean or not? Does it have to be created in Singapore? Does it need to have something that’s so recognizably from that country – like a folk song – to make it representative? These are question that I don’t have answers for because I want to explore their perceptions and perspectives. And it always ends with me asking, how about yourself – where are you in this whole narrative and discussion? What is your role here?

Chen: This question of identity always comes back to haunt us and I think to reach a new point is to reach a kind of belonging where we are comfortable with ourselves. We move on from the very obvious or symbolic tokenism kind of tokenism to embracing the modernity of Singapore and its influences.

TFI: Do you feel compelled to inject a local Singapore flavour into your work as a Singaporean composer? Is it deliberate, or it that just part of who you are as a musician, composer and individual?
Chen: Sometimes it’s more deliberate than other times. Zheng Yi’s idea for the commission was actually to represent Singaporean culture, so the Singaporean-ness, in this case, was requested for. I’m always looking for the little pockets of Singaporean-ness that may not have been explored so much and I always try to find a poetic way to do so. Of course, the easy way is use a folk song or gamelan scale; that’s more obvious. But to find the small titbits of Singaporean-ness takes more effort – which is worth it.
It’s important to be able to speak to non-specialist audiences, because we always have to balance the “listenability” or accessibility versus the avant-garde and contemporary. It’s important to have the music work even though the audience may not know what we’re doing. That’s the craft of composing – where we have to make sure that music works. It’s like using a chair – it has to work!

TFI: You have to be able to sit on it!

Chen: Exactly! I try to balance between being a composer of new music and providing music for everyone. That’s my take. The music has to be able to function.

Double, double toil and trouble – An Interview with Steven Ang of ‘The Mad Scene’ for Verdi’s Macbeth | The Flying Inkpot