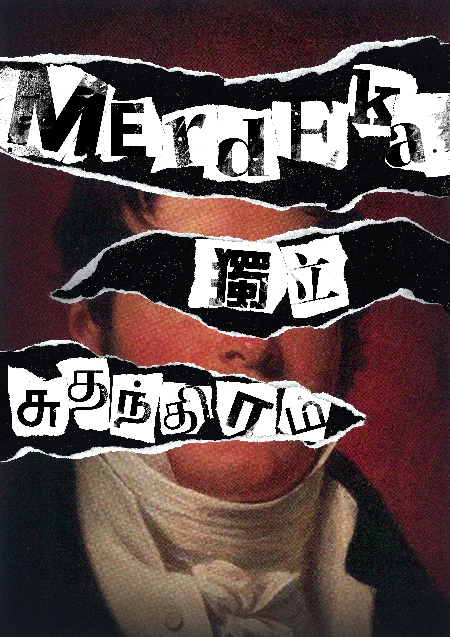 Wild Rice has always been associated with the plays of its resident playwright, Alfian Sa’at. From the more personal gay-plays (the Asian Boys trilogy) to the political (Cooling Off Day) to pantomime (Journey to the West), he’s always had his finger firmly on our island-nation’s pulse, with hard-hitting dramas that go straight to the heart of things.

So it’s only fitting that his latest, Merdeka (meaning Independence in Malay) was included in Wild Rice’s Grand Opening Season now playing at their spanking new Ngee Ann Kongsi Theatre at Funan Mall.

In equal parts inventive, revelatory and entertaining, it is a stunning, enthralling addition to his body of work.

Written as a response (and commission) to the bicentennial celebration happening this year of Singapore’s ‘founding’ in 1819 by Sir Stamford Raffles, Alfian, with up-and-coming auteur Neo Hai Bin, explores suppressed, little known stories, artfully selected and told from the point of view of indigenous people, using them to explore the uneasy relationship that the colonised have with their former colonial masters.

An ensemble piece, multiple stories are presented, framed by the device of a book club called ‘Raffles Must Fall’. There are six members, (conveniently diversely represented, as one points out, before another tears her down) – some more fervently anti-colonial than others.

They present their stories (all of which are acted out together) from their research, beginning with the harrowing account of Raffles’ time in Java as lieutenant-general (“Attack on the Palace”) where he subjugated and humiliated the Javanese rulers after annexing the island.

The inner stories are more nuanced but scarcely less powerful – “The Loss of Singapore” turns the light on how Singapore was truly “bought” by the East India Company. “Rani of Jhansi Regiment” takes us regionally to Perak, Malaya, while “The Chinese school students protest”, playing up the ham factor and earnestness so stereotypical of Chinese melodramas, memorably brings us a nearly-love story set in Chinese High School.

If this all sounds like a loosely strung-together history lesson writ large on the Wild Rice stage (and therefore likely to bore the pants off the non-history inclined), be assured that Merdeka is nothing if not entertaining.

A truly Singaporean play, a gamut of languages is used besides English – Malay, Tamil and Mandarin all feature in what must have been a Herculean effort to learn for the amazing cast – everyone either had lines or had to sing in at least two languages that were not their mother tongue. And, of course, there’s Singlish.

But it is the use of song and dance that ties the dramas together – Malay drums and gongs were often used to add to the ambience and ceremony of a scene, while a love lamentation, sung by Sangeetha Dorai, brought home a tragedy that words alone would have struggled to portray, while other selections provided more light-hearted relief.

Amidst the heavy history lessons, Alfian and Neo skilfully weave humour, irony and clever dialogue, poking fun at itself in the end, before a call-to-action of sorts. It is a blockbuster of a piece that anyone with the slightest interest in the ‘alternative’ history of Singapore should watch.