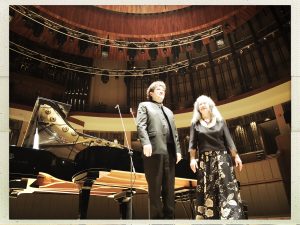 In classical music, few living artistes hold the kind of mystical allure that Martha Argerich commands. When news broke that the Singapore International Piano Festival had managed to invite her to play, my Facebook feed erupted with friends’ posts in almost equal proportions of amazement and disbelief – it was as if festival director Lionel Choi had finally landed his Moby-Dick (and playing his favourite composer, Prokofiev, no less!). I duly bought my tickets the moment they went on sale, front-row, like a fan-boy, then kept my expectations low, given her reputation for cancelling. Like many others, I couldn’t believe my eyes when that video of her arriving in Singapore was shared. The Kim-Trump summit may have been on Tuesday, but for pianophiles in Singapore, Monday and Wednesday were the true events.

For these two concerts, La Argerich brought fellow Argentinian Dario Ntaca as her partner for the duo recital as well as conductor for the concerto with the Singapore Symphony Orchestra. Unusually for a top-flight pianist, she’s stopped giving solo recitals, saying that she feels lonely on stage in those performances, so admirers have long had to be content with hearing her in a plus-one situation, sometimes with such other piano luminaries as Stephen Kovacevich, Nelson Freire and Daniel Barenboim.

Starting with Debussy’s rarely heard two-piano version of his Prelude to the Afternoon of a Faun, the first half was tentative, sometimes tense affair. In the Debussy, Ntaca tried but failed to conjure up the array of colours that Argerich had at her fingertips, with his piano’s upper registers coming across as somewhat bald and glassy, in a rather static account of the piece.

In the Schubert, a four-hand piece, the duo playing was unsettled and uncomfortable, with uneven scales and oddly articulated mordents from Ntaca that made for some awkward moments.  Nevermind the hapless page-turner, who perhaps starstruck, prematurely turned pages on a few occasions, to the visible consternation of the pianistic legend. The Mozart, a perennial two-piano favourite, was marginally better, but some spirited playing aside, the two pianists never seemed to get under the surface of the music, let alone agreeing on phrasing, articulation and so on – surprising, given their long history of collaboration.

The second half was as intensely musical and exciting as the first had been uninspired. Here, Argerich and Ntaca swapped pianos. First came the Brahms, and here Argerich threw caution (and in some parts, her colleague) to the wind. Establishing herself as the dominant voice from the theme’s first statement, music flowed from every phrase, eclipsing Ntaca entirely and driving each variation forward with sensitivity but also virtuosity, especially in the helter-skelter, mercurial fifth variation, while finding colour in the fourth variation. But the variation that spoke to me the most – the high point of the evening, in fact – was the relaxed seventh ‘Grazioso’ variation, which went straight to the heart with Argerich’s singing, penetrating musicality – the first moment that night that reminded me what made me fall in love with her playing, pure technique aside.

The Rachmaninoff Suite, conquered entirely by the duo, was a much better fit technique and temperament-wise for Ntaca and Argerich, and they were both in their element, beginning with the opening March, with waves of glorious sound resounding across the concert hall, interspersed with cascades of dazzling octaves and arpeggios. It was pure Rachmaninoff gold. The Romance was remarkable not just for its spun layers of romanticism but also for Argerich’s remarkable restraint – perfectly judged and never maudlin. In live performance, you understand just what a force of nature she is, especially in the fury and storm of the last movement Tarantella, where she drove the music forward, climax after climax, and the duo showed a cohesion and understanding of the music that the first half surely lacked – it was radiant, sun-flooded playing, right till the breathless coda. As encores, the duo played Debussy’s En Bateau from his Petite Suite and reprised the  Waltz from the Rachmaninoff to end a rather uneven concert.