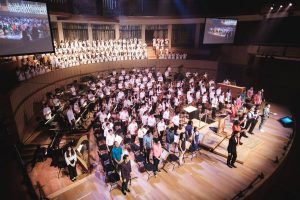 Leonard Bernstein (left) was such a hugely talented person – as a conductor, performer and educator, he was at the top of his field – that it’s sometimes easy to overlook his contributions as a composer, West Side Story aside. The Orchestra of the Music Makers, never content with mediocrity, put up a show tonight so stunning that I believe it will be talked about in the years to come, and with a level of technical polish far outstripping anything we’ve seen locally in recent years.

Bernstein’s Mass is somewhat of a Cinderella compared to his more accessible pieces, including Chichester Psalms. A strange beast, it’s a concert piece that has theatrical elements, and in many productions is fully staged, but Edith Podesta’s semi-staging, at the Esplanade Concert Hall, was incredibly effective. Using the whole of the stage, including the choir seats, there was an additional ‘pulpit’ in front of the conductor’s podium (in reality probably just a lectern on risers) upon which much of the action centred, with performers bringing in chairs and props as needed. She promised a mega-church vibe and to a large extent achieved this, with live camera feeds broadcast on either side of the stage, together with the lyrics. With the orchestra already seated on stage, the pre-recorded, slightly hysterical ‘Kyrie’ played over the Concert Hall’s speaker system as the hall was plunged into darkness – the Mass had begun.

The story of Bernstein’s Mass is one of the Celebrant’s existential crisis – in which he, a church leader (played by the wonderful Kevin Vortmann), was once cocksure and smug in his faith. The appearance of the Street Singers pointing out the hypocrisy of once-a-week church-going, amongst others, falters his faith, leading to a dramatic nervous breakdown in a semi-mad scene and the community’s eventual coming-to-terms with what had happened. 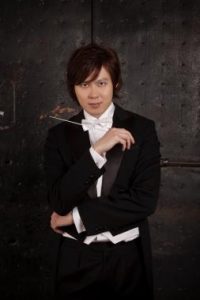 Joshua Tan’s secure handling of the orchestra – much of which was accompaniment – laid the backdrop upon which the action took place. Never indulgent, even in the expressionist Orchestral Meditations which punctuate the action (much like Britten’s Sea Interludes in Peter Grimes, but in Podesta’s conception accompanied by videos of various faiths), he kept the action moving – not a bad thing at all in a work as sprawling as this. With his performers spread over most of the stage – the massive orchestra on stage, the Street Singers in front of them and the singers representing the congregation up in the choir stalls – he demanded attention and rewarded it with precise cues and accurate baton-work, allowing the performers to feel as at ease in the more chromatic, ‘difficult’ music for the Latin Catholic Mass as in the contrasting jazzy/bluesy tunes of the Street Singers.

Playing the Street Singers, Himig Sanghaya were given individual billing in the programme, and deservedly so. Vocally fearless, they sashayed, beguiled and earnestly entreated – convincing as the voices of those who had encountered reasons not to be unwaveringly faithful. With luscious voices and great acting, they took the music and swallowed it whole, and were a joy to watch as an ensemble, rousing the action to a climax in the militant ‘Agnus Dei’. The main congregation choir (the Symphonia Choralis and Volare Treble Voices) was likewise a rock of musicality, taking their difficult score in their stride. Boy soprano Mikey Robinson was, too, secure and beautiful in tone in his solos. 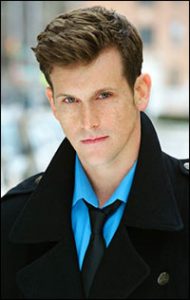 But it was the celebrant, Broadway star Kevin Vortmann, who carried the show through. A lyric tenor with an edge to his voice (think Peter Schreier) who’s no stranger to the role, his conviction to the part paid dividends and bared his character’s tortured soul, especially in the scenes after he smashed the chalice on the floor. Wonderfully controlled in all ranges (ok, his very lowest notes could need some support), his highest notes were thrillingly sounded and yet clearly denounced – it was like a masterclass, and his very highest pianissimo floated like cotton candy. His athletic acting, including prolonged passages sung lying down and running around the choir seats, and tortured facial expressions, drew the audience in and dispelled all doubt that this work is indeed a masterpiece.

A hugely rewarding night of Bernstein, and of theatre, and a triumph for all.