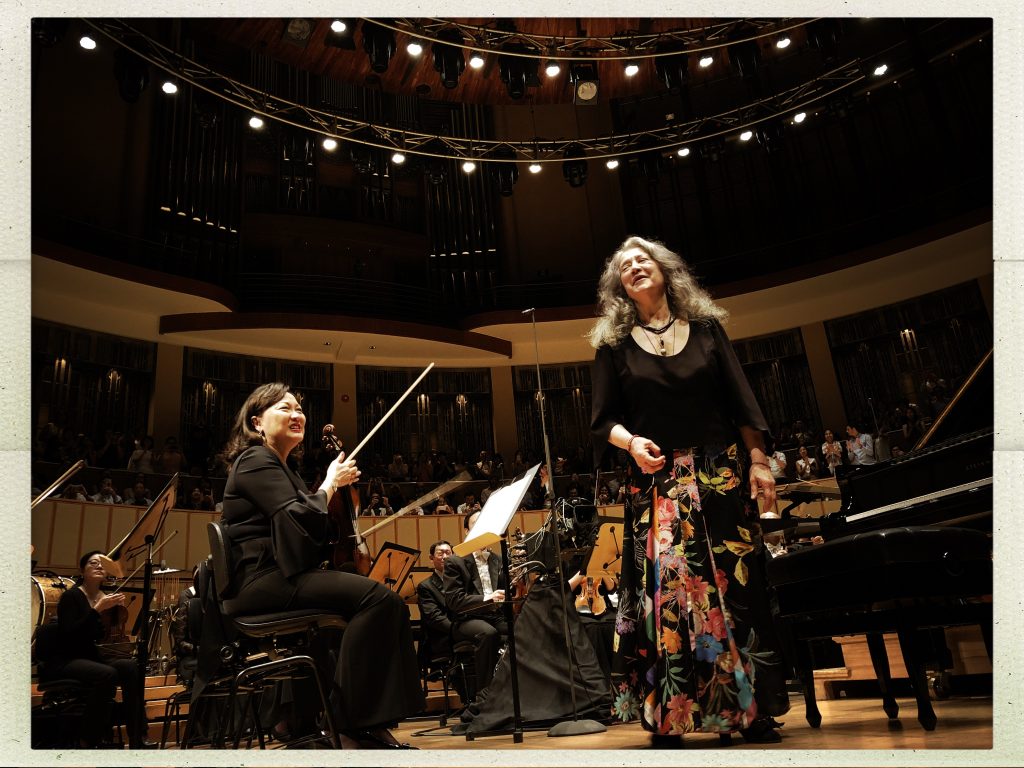 If the audience anticipation at Monday’s concert reached fever pitch, Wednesday’s, with the Singapore Symphony Orchestra making its first appearance ever at an SIPF concert, reached frenzy-level, with all tickets completely sold out, even with the additional choir gallery seats released. Some concerns existed about the SSO’s contribution with the Prokofiev Piano Concerto No.3, whose orchestral parts are challenging to say the least, since many of its musicians had left for home (read: overseas) as the main orchestral season had officially ended. But pundits needn’t have worried – the orchestra rose to the occasion, outplayed themselves and then some.

Dario Ntaca took to the podium for the whole evening, playing and conducting the orchestra from the piano for the Mozart. The opening Leonora III overture showed off the SSO in splendid form, even if their sound wasn’t as plush as usual, with lovely contributions from the winds (great flute), a commanding off-stage trumpet and tight ensemble work.

To have to play and conduct a piano concerto alongside Argerich is to invite comparison, however unfair that might be, and perhaps Ntaca could never hope to sparkle or glitter as much as his fellow Argentinean, but his own performance of Mozart’s Piano Concerto No.17 shed a little light into this unequal partnership. Introverted to a fault, his playing was low-octane and self-effacing even in the cadenza, though not sharing the stage with Argerich allowed him to be more relaxed. There were some lovely moments, for example, in the second movement’s heartbreaking piano entry, and in a later soliloquy. The Rondo, taken at an implacable, slower tempo, was unabashedly big-band, circa 1960s Mozart, sometimes clunky – it held its own but just wasn’t very special.

The Prokofiev third piano concerto, one of La Argerich’s calling cards, was another story entirely. Hurricane Argerich swept in after a slightly four-square orchestral introduction, playing with gobsmacking virtuosity and digital dexterity, huge sound and musical hypersensitivity. Words can’t do justice to what can only described as a phenomenon and a force of Nature – to watch her play the first movement at breakneck speed, complete with awkward hand crossings, torrents of arpeggios, roaring octaves and more – is to be convinced that she was born, nay, engineered to play the piano – a veritable piano-playing machine.

The moon-lit second movement’s mercurial mood changes posed no challenge either. Here, she transitioned easily from Prokofiev’s desolate lyricism in the piano’s entry much like a troubadour, to fearsome ferocity, with Ntaca supporting closely through the silvery orchestral textures. The Finale, taken at a rollicking tempo, was no less electrifying than the first movement – in parts, I forgot to breathe, so completely commanding was her technical wizardry. It was exhilarating, but what made it so special was the surefootedness with which she led the orchestra through the movement’s narrative, like an old hand marshalling her troops, and the control with which she did it all. She looked like she would have been able to handle something twice as difficult and twice as fast without breaking a sweat.

The SSO, inspired by the great pianist, played their hearts out in Prokofiev’s big Romantic tunes, while Ntaca kept a close eye on her from the podium.  He tried his best to make the orchestra keep pace as well as he could with her hard-driven, unrelenting tempo, but in parts, the SSO was just that bit behind her, playing catch-up. Oddly, this made it even more exciting. When she led the concerto to its final, whirlwind close, the whole hall erupted in a rarely-seen, but richly-deserved standing ovation, which she rewarded with two encores – Scarlatti’s famous repeated-note sonata and Debussy’s La soirée dans Grenade from his Estampes.

Legends have come and legends have gone, but this encounter with greatness is one I will never forget.