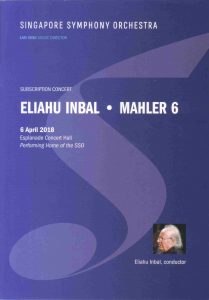 We’ve been so spoilt during Maestro Lan Shui’s tenure with reliable high-quality Mahler performances that it can come as a shock to be reminded of just how much we may miss those when he steps down next year.

This performance of Mahler’s Sixth was a case in point. 82-year-old Eliahu Inbal is a seasoned Mahlerian – his Ninth with the SSO in 2015, which coincided with the death of Lee Kuan Yew, is still mentioned in reverential tones. Yet this evening’s performance, in turns wrong-headed, frustrating and indifferent, was easily the weakest performance of a Mahler symphony by the SSO in recent memory. For the most part, the fault lay with the Maestro’s interpretation – a pity, since the orchestra’s playing was of a generally high standard throughout.

The most powerful performances of the Sixth is able to shake you and leave you feeling like an empty core of a person, but even a routine performance of this formidable symphony shouldn’t leave the listener indifferent when that last cataclysmic chord cries out and pizzicatos bring the music to its final rest. Yet that was exactly how I felt at the symphony’s end. 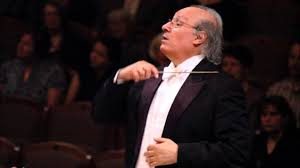 Inbal (right) started off comfortably enough, with a middle-of-the-road tempo for the opening march. Emphasizing the Classical nature of this symphony, he eschewed large tempo changes, keeping to a single tempo à la Horenstein and generally respecting Mahler’s repeated instructions to keep to the original tempo. But he also shied away from moulding the music in any way at all – the ecstatic ‘Alma’ theme failed to soar or form any type of contrast at all with the march theme. This had the effect of undermining the music’s drama as it unfolded in the development, making for a polished but superficial performance that had all its humanity sucked out. Often, it just felt rushed.

Smoothened over, too, were the major-to-minor trumpet/oboe chords which appear like a totem in this symphony and signify the existential struggle between major and minor, good and evil. The accompanying timpani tattoos, though, definitely made themselves felt.

Taking the Scherzo-Andante order, Inbal launched into the Scherzo almost immediately after the end of the first movement.  To me, this was a miscalculation, since the audience (if not the orchestra) needs to feel that temporary sense of relief and triumph after the Allegro energico, before it’s crushed by the Scherzo’s mechanical, industrial onslaught. A very modern performance, he eschewed glissandi and resisted characterization of the altväterisch trio section with charm or repose, coming off very matter-of-factly as a result. I would have liked this to contrast more with the insistent timpani theme (something of the Nibelheim dwarves here?) and the cruel sneer-trills of the xylophone, but overall, this was the movement that was best played.

The Andante moderato is a much-needed respite from the exhausting Scherzo. In the same Classical mould, Inbal kept the music moving along. He started with an almost-too-brisk tempo which nevertheless worked perfectly, staying away from the saccharine wallowing of some performances and making its presence more ephemeral for that. Interpretatively, this was the most interesting of the lot, but perhaps a more measured tempo in places would have helped drive home its sense of longing and loneliness, and allowed us to enjoy the cor anglais and principal horn’s ravishingly played solos even more. As it were, this felt sometimes more like an Adagietto, though the climaxes were hardly less ecstatic for that.

Which brings us to the Finale. To me, in Mahler, there’s always the issue of an overarching narrative, an extramusical programme in his music, though he often disavowed titles given to his works and liked to think of his works as being able to survive without the crutches of an external programme.

What’s the narrative of the Sixth’s finale? The famous hammer blows bring this into perspective – Alma Mahler said they represented blows of fate. Musically, the protagonist-hero finds himself in a hostile, poisonous environment –  menacing, even. He struggles and rails against his fate, only to be brought down by the hammer blows. He rallies his strength, once, twice, and finds temporary respite. He strives towards victory and can nearly taste it, only to be struck down again. Mahler needed the scale of the movement to bring his musical points across, which is why it frequently lasts as long as half an hour. Every reprieve, every struggle needs to make its mark for the movement to make sense and justify its length, otherwise it can feel like a meaningless, unconnected series of whipped-up orchestral passages.

A good performance brings out the existential struggle, the Gothic drama, and doesn’t shy away from the extra-musical elements. Unfortunately, this performance often felt rushed-through, indeed under-rehearsed, with Inbal’s hero coming across as a paper boat in a Signal 5 typhoon, tossed about by the tides of Fate rather than even attempting to struggle against them. Just listen to Tennstedt’s fine ‘live’ performance with the London Philharmonic Orchestra to hear exactly what was missing here.

Climax after climax went to waste, under-characterized, despite some fine playing from some segments of the orchestra. The first hammer blow (nicely realized) galvanized the performance somewhat, but it quickly fell apart again, with some truly untidy, unfocused ensemble work and some other sections choosing their own tempo (winds, harps, anyone?), and some unwritten atonal work (the final mournful chorale).

At the symphony’s end, I didn’t feel at all like I would shed a tear for this hero – just indifferent.

And that shouldn’t have happened – not with Mahler’s Sixth.