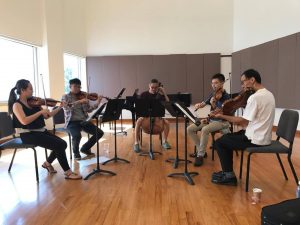 What began as violist Jeremy Chiew’s recital – aptly titled Voila Viola – in 2011 at the Arts House with the intention of inciting greater appreciation for the viola, has become a regular showcase of viola repertoire featuring other young violists. Viva Viola! is in its 3rd instalment this year (2015’s offering was known as Basically Viola) and joining the VV family are violists Christoven Tan, Calvin Dai from the Singapore National Youth Orchestra, and Jolene Goh, a recent graduate of the NAFA-RCM (BMus) programme. This is the largest number of violists in a VV concert – and possibly any recital in Singapore (not counting orchestral viola sections).

One of the most highly anticipated performances on the programme is Mendelssohn’s String Quintet No. 2 Op. 87, featuring Chiew and Christoven Tan with guest musicians Chikako Sasaki, Andrew Ng and Leslie Tan. Written in the last decade of the composer’s life and published posthumously in 1851, it is not often performed – especially when compared to Brahms’ and Dvorak’s “viola quintets” which are arguably the more representative 19th century works of the genre. Aileen Tang listened in on their rehearsal and discovered that the 5 musicians performing the quintet are a bit like any typical family – not without its squabbles, but ultimately determined to overcome disagreements.

Not playing in the quintet: Calvin Dai and Jolene Goh (viola)

TFI – All 5 of you are experienced chamber musicians but this is the first you’re playing together as a quintet. What is that like?

AN – I think it’s sort of a cordial relationship. It’s my first time working with Christoven but I’m sure most of us are pretty well-connected in the music scene.

CS – I feel weird playing with Leslie [because] he used to be my teacher here [at Yong Siew Toh Conservatory of Music].

LT – I’ve taught all of them at some point so it’s strange for me too. But it’s fun. For me, it is special. It’s different playing with younger people – they have different
energies.

TFI – I know that Jeremy programmed this piece precisely because it’s so rarely performed. Any other reasons?

JC – It’s a jubilant piece so it’s a nice end to a viola programme.

LT – I think it’s a very badly written quintet, if you want to think of it as a “viola quintet” because there aren’t a lot of viola lines. If you think of [works by] Mozart or Bartok, [the violas] are a lot more exposed; more is written for them. It’s not a badly written piece [per se] but if you want to showcase the viola, it’s perhaps not really [the best piece].

TFI – Yes, because the 1 st violin does take centre stage for quite a bit.

LT – There are still solos spread around but for me, definitely not enough for violas. So maybe another reason it’s not performed a lot is because if I was a violist, I would
say, “I’m not touching that because I’ve got nothing to do there!”

AN – There’s also [the fact that it’s] posthumous, so maybe there’s a reason why Mendelssohn didn’t want it published. I still think it’s a worthwhile piece to be
showcased.

TFI – Several times during the rehearsal, I heard some of you saying you couldn’t hear each other because there’s so much going on. What is the communication going to
be like?

AN – Since we have five people, we have more things to keep track of [as compared to a string quartet]. We have to be more aware of all the lines that are going on. Sometimes there are various pairings of instruments so there are relationships going on all the time. I just think that to play this piece well and to perform it, one must first study the score and try to understand where all this is coming from.

LT – Because there are five people, the texture becomes thicker and messier so we’ve got to pay attention [all the time].

FI – When you have differences in opinions, how do you make decisions? Who makes the decisions?

LT – There’s no right or wrong. Everyone brings a different sensibility to the table.

TFI – You’ll be performing this quintet for both nights of Viva Viola! Any chance that you’ll do it one way for the first night and another for the next?

LT – I don’t think so. We could, using the different editions, but we don’t have the luxury of time [to rehearse].

AN – Whatever happens won’t be scripted!

Viva Viola will play from 11-12 August 2017, at the Esplanade Recital Studio. Tickets are available from Peatix.