THE RED VIOLIN with Kam Ning

John Corigliano: The Red Violin: Suite for Violin and Orchestra

One often associates orchestras with conductors and chamber music with string quartets or a similarly small, intimate group. re:SOUND, touted as Singapore’s first professional chamber orchestra, breaks both those stereotypes by reminding the audience that the baton-wielding conductor is a rather recent development in the history of western classical music.

re:Sound’s fourth concert, led by Singaporean violinist Kam Ning, was its most exuberant edition yet, with an emotionally-charged programme and impassioned playing. That most of the musicians are themselves seasoned chamber musicians was most evident in the evening’s quieter moments, where the music’s layered nuances were sensitively brought out. It was in the faster movements of the programme’s three works that weaknesses in coordination were revealed, even with the very physical full-body leading by Kam Ning and the other section leaders.

Benjamin Britten’s Simple Symphony is a popular choice for many school string ensembles but hearing the work played by a group of professional string players offered a vastly different experience – one in which precision and control were perhaps compromised for excitement and grandeur. The first movement, Boisterous Bouree, was exactly that – heart-stoppingly vigorous. The tempo taken was risky and, as a result, unruly. The subsequent movement, Playful Pizzicato, came across as being too harsh to be playful, though the manner in which the phrases skipped from section to section was executed with glee. It was in the third movement, Sentimental Saraband, that the orchestra demonstrated a musical maturity that a school ensemble is rarely able to achieve. The music uncurled in rich tones, the clarity of its weaving parts filling the Hall. Unfortunately, the Frolicsome Finale ended up being overly frenzied. While the lyrical second theme originating from the 2nd violins was delightful, the rest of the movement hurtled impetuously to its breathless conclusion. 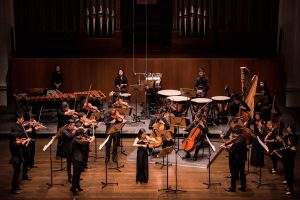 John Corigliano’s Red Violin: Suite for Violin and Orchestra was a mix of the mysterious and tragic, with moments of madness thrown in. Kam Ning’s solo was excruciatingly sorrowful and intense to the point of almost sounding possessed by the spirit of the mythical Red Violin. The virtuosic passages were executed with technical ease and an equal dose of emotion. The orchestra matched their soloist in expertise, their parts interweaving to create a beautiful, yet unsettling soundscape. Worth a mention is the string quartet section, divinely played by Seah Huan Yuh, Loh Jun Hong, Jonathan Lee and Robert Choi. Choi also had substantial solos, though they were played with far less expression than Kam Ning’s starring performance.

Edvard Grieg’s String Quartet No. 1 in G minor, op. 27 is a jolly piece evoking the Norwegian folk tradition. The version arranged by Richard Tognetti played tonight displayed the musicians’ ability to shift effectively between different timbres and moods, with every nuance adhered to. However, coordination was once again a problem, especially in the Allegro molto ed agitato of the first movement. The waltz gestures of the Romanze were elegant but its darker interludes were a tad too intimidating in contrast. Though also more wild than controlled, the concluding two movements brought the piece to a rousing conclusion midst tricky cross rhythms and syncopation.

The appreciative audience was rewarded with Grieg’s Last Spring as an encore. Though, as Kam Ning somewhat apologetically described, “not as joyful [as the rest of the programme]”, it was fitting piece with which to end the concert. At once wistful and then offering glimpses of hope, it showcased the orchestra’s ability to produce a most beautiful and rich sound. Much to the audience’s delight, the musicians looked like they were really enjoying the camaraderie as they responded to each other through both physical and musical gestures, reminding us that the essence of chamber music is indeed a conversation between friends.

Concert Review: Standing on the Shoulders of Giants – re:Sound – 5 July 2019