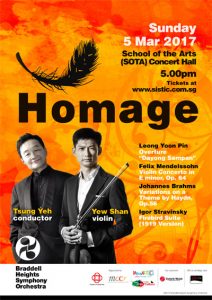 Tsung YEH is so synonymous locally with the Singapore Chinese Orchestra that few are familiar with his Western classical roots. Tonight’s well-attended concert, his first with the Braddell Heights Symphony Orchestra, demonstrated his impeccable credentials in a stylishly executed program that showcased his versatility in a diverse repertoire.

After some opening jitters in the ‘Dayong Sampan’ overture (a little short on thrust and atmosphere), concertmaster YEW Shan took on Mendelssohn’s famous E-minor violin concerto. Always musical, Yew made it clear that he would play with, rather than against the orchestra, from the opening bars. The conductor’s support was exemplary, with some really nice touches worked out between soloist and the orchestra, clarifying many of Mendelssohn’s lines, especially in the winds. The overall effect was of an intimate conversation – not quite ‘molto appassionato’ perhaps, but a more quiet virtuosity. A very sustained bassoon bridge led into the Andante, with a deliberately slow orchestral introduction, before picking up pace with the soloist’s entrance. Yew confidently negotiated the double-stopped passages in a thoroughly musical performance. If the finale was more sober than usual, it still fairly sparkled with fairy dust, and the dialogue between orchestra and soloist was irresistible. 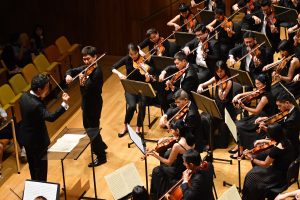 Yeh and the orchestra (right) were, if anything, even more impressive in the program’s second half. Elegantly led by their dapper conductor, the Brahms’ sunny ‘Haydn’ Variations served as a showcase for the BHSO’s instrumental sections, with lovely contributions from the winds (especially principal Makiko Kawamata’s reedy oboe) making their mark. But what moved me most was that sense of music-making and discovery that Yeh and the orchestra shared. Moving from variation to variation, careful attention to phrasing and characterisation was evident, and the orchestra tackled Brahms’ tricky rhythms like professionals, culminating in the life-affirming final passages of the Passacaglia.

This sense of discovery was repeated in their bracing performance of Stravinsky’s 1919 Firebird Suite. Here, the orchestra outdid themselves, with every section playing their heart out. Yeh shaped the music lovingly but not indulgently, moving the story along with a lightness of touch reminiscent of the French school of conducting. Similar attention was showered upon to Stravinsky’s rich orchestral colour and the musicians remained very responsive, with an attractive suppleness, especially in the Firebird’s first appearance. In the Infernal Dance of King Kashchei, Yeh unleashed a huge sound from the orchestra, and here, as they did elsewhere, the band showed a new-found confidence that I had not seen before in their prior concerts. The Finale’s coda was spine-tingling stuff – not flamboyant, but full-blooded and triumphant – a worthy conclusion to a memorable evening.