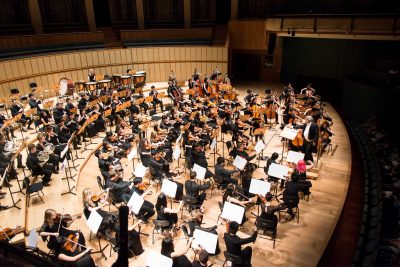 Encore: Ride of the Cossacks / The Ride to Dubno from ‘Taras Bulba’ by Franz Waxman

Can performances by amateur orchestras be as satisfying as those by professional ones? That question was answered resoundingly by tonight’s thoroughly satisfying concert by the Western Australian Youth Orchestra, Orchestra of the Music Makers and the OMM-SOTA Camp Orchestra.

Beethoven’s Fifth in Mahler’s ‘retuschen’ was the rather heavy opening piece. Instead than aspiring to even greater monumentality, Beethoven’s iconic work took on a more humane scale under Peter Moore’s capable hands in a Romantic-lite performance, large in sound but eschewing huge rallentandi and hairpins. The first movement opening theme was confidently stated and the movement took off well, though more confidence in each successive string entry would have better kept the momentum going in the development, as would have more accurate timpani entries especially on the off-beats. It’s difficult to say exactly which points of interpretation were Mahler’s and which were Moore’s, but the some were quite jarring to those familiar with the piece. For example, the oboist took a rather long pause for breath before continuing with the Adagio section. The ensuing Andante, played here at a proper walking pace, breathed nicely through the variations, with the cello variations especially nicely phrased. Moore very ably balanced turmoilwith introspection in this expressive performance. Initial horn mispitchings aside, the Scherzo featured robust lower strings lending the fugato some much-needed heft, with muted horns a nice Mahlerian (though terribly inauthentic) touch. A particularly beautifully executed pizzicato section led the music into the final movement, with the strings tearing into the music, leading it jubilantly into the final pages.

Sarasate’s Zigeunerweisen was a rather odd selection as a palate cleanser, but it served its purpose. Canadian violinist Da Costa’s left-hand techniques proved stronger than his right here, with impeccable pitching in the double stops, while elsewhere there was some trouble articulating the section requiring rapid alternation between the left hand pizzicato and bowing. More curious was the omission of 12 bars in this already quite brief showpiece. The performance was musical, but hardly conjured up visions of the Romany people with their caravans.

It was left to Mahler’s First Symphony (not ‘Titan’ – that title was given to only its earlier incarnation) to complete the evening. Here, OMM music director Chan Tze Law’s confident direction, attention to detail and imaginative interpretation were an absolute joy, relegating memories of a limp Mahler performance by a professional orchestra just weeks ago to distant memory. There was nothing routine here. The opening pages unfolded tentatively and broadly, almost uncertainly, as if Nature itself was just waking up. Pitchy off-stage trumpets sullied that mood somewhat, but as the mysterious music moved into the walking ‘Ging’ heut’ morgen ubers Feld’ passage, the effect was of Nature comfortably stretching itself out and all the flowers coming into bloom. Too many memorable passages to list, but the much more slowly taken exposition repeat, daringly played-out cello downward glissandi and beautifully handled transitions made this performance one that managed to take the time to sniff the flowers while keeping a watchful eye for overall structure.

Nicely resolute lower strings in the Scherzo, taken here at a moderate tempo, accompanied a keen attention to dynamic gradation, though it lacked just that last bit of rhythmic explosiveness. The genially-played Ländler trio, featuring lots of old-fashioned glissando, had the attentive orchestra following Chan’s rather malleable tempi, with Brucknerian foot-stomping aplenty in the return of the main scherzo theme. No less well-characterized was the third movement funeral march, with the double-bass solo played by Andrea Sitas and solo oboe played commandingly by Tay Kai Tze. Chan had the full grasp of this movement, executing the Klezmer-influenced sections brilliantly, though the ‘Auf der Straße steht ein Lindenbaum’ section lacked the tear-laden beauty of more established string sections. His return to the funeral march, nearly at double its original speed, gave the music a relentless quality – a nice touch.

Chan’s rather flexible, interventionist approach continued to pay off in the expansive Finale. The combined orchestra played their hearts out in this storming, seething music, conquering climax after climax valiantly while hanging on to his every gesture. No less effective were the resigned, inward looking passages (Mahler knew all about resignation even then), which Chan played off nicely against the movement’s general optimism. Amidst the swathes of orchestral colour and committed playing in all sections, special mention goes to the violas in their grimly stated passage leading up to the all-important marshalling of troops for the symphony’s final, triumphant bars. And if Chan’s whipping up the music toward the end somewhat spoilt that determination, it reminded us all that this was, after all, Mahler’s most youthful symphony. Exhilarating stuff.