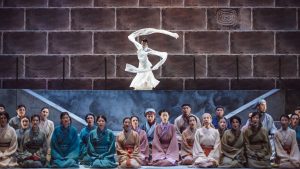 ‘The riddles are three; death is one!’ proclaims Turandot in her entrance aria, and this fascination with polar extremes can be said to drive the opera itself. Blood-thirsty peasants swing between the extremes of condemnation and pity for the executionee; Calaf, unwavering in his wooing, contrasts against Turandot’s icy cruelty, while Liu labours, martyr-like, with her love for the prince.

Underscoring these extremes of emotions was Tan Ju Meng’s visceral set design, eschewing the usual lavish palaces, pavilions and Chinese gardens for an austere stone dais, bronze plaques, and designs from China’s prehistoric Bronze Age. As Director Lo King-man explains in his notes, this production follows Puccini’s instructions to ‘unfold the action in a China of legendary times’, taking the audience back to a mythical primordial era when Pangu the giant separated Heaven from Earth, and fairies and dragons ruled the skies. 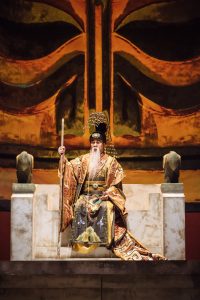 Complementing Tan’s sets were Mandy Tam’s diligently designed costumes, with Emperor Altoum (right) donning a pearl-stringed headdress reminiscent of those seen on the Jade Emperor of the Heavens. The most resple
ndent costume – reserved for Princess Turandot – was remarkable for showing intricacy in ornaments and layering without appearing garish. Great restraint was also taken in not draping the cast in gaudy postmodern flights of fancy or painted faces from Peking opera, with Calaf and Timur clad in simple traditional nomadic garb of Tartary, and the three ministers Ping, Pang and Pong wearing flowing magisterial robes distinguished only by their colour. Overall, the visual impact was more stark and effective than a bloated profusion of exaggerated chinoiserie.

The task of bringing the splendour and power of this production to the audience thus fell to the musicians and singers. Puccini’s scoring was lush and Romantic in scale, borrowing motifs from Chinese music boxes, and he went so far as to commission a set of thirteen gongs just for this opera, which he unfortunately did not live to see staged.

The Singapore Lyric Opera (SLO) Orchestra under Joshua Kangming Tan was magnificent, fully translating the grandeur of a fantastical China with ground-shaking lower brasses and a rich, opulent symphonic sound. Tan paced the music well: comedic elements were coquettish and played off against the stately court scenes; moonlit arias floated lightly; dramatic parts filled the theatre with nary a stutter in the narrative flow, and climaxes were well-timed without sounding forced. The children’s choir (SLOCC) sang beautifully, and if some of the little girls seemed dumbstruck with Turandot’s beauty and voice, this just added to the ‘awww’ factor.

The SLO Choir took some time to warm up, but by the middle of Act 1 the dense choral passages were working well with the orchestra to bolster the excitement of the scene. ‘Ah! Per l’ultima volta!’ at the end of Act 1, when everyone tries to dissuade Calaf from sounding the gong, was built up well, the foreboding march an exercise in creating tension between the choir and the various singers.

The relatively minor roles of Emperor Altoum (Leslie Tay) and The Mandarin (Alvin Tan) were convincing if only in context. Tay’s usual bright lyric tenor that brings lively drama to his roles, became subdued and distant — but only as an old Emperor of the Heavens would be. Tan’s turn as The Mandarin was even more distant, and his few lines and proclamations (‘Popolo di Pekino!’) did not help him shine. 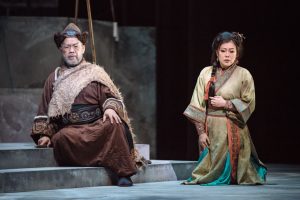 Baritone William Lim fared better as Timur (right), giving his role a rich tone that carried a battered edge, as befits a deposed king, now blind and disabled. Chinese soprano Li Yang (right), as ill-fated slave girl Liu, turned in a wonderful performance. Her sweet lyrical voice was smooth throughout her range and especially honeyed in the higher register, raising goosebumps in her Act I ‘Signore, ascolta’, and judging from the applause she garnered, clearly a crowd favourite.

The three comedic caricatures, Ping, Pang and Pong, worked great in both tutti and solo passages, with Martin Ng (as Ping) leading the trio vocally and Peter Ong (as Pong) the most effective theatrically. However, ensemble work needed tightening, especially in the languid ‘Ho una casa nell’Honan’; and the faster ‘Fermo! Che fai?’ 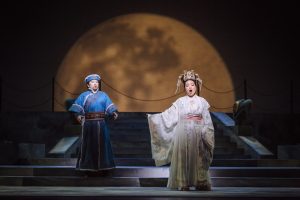 The production is fortunate to have Korean tenor Lee Jae Wook and soprano Jee-hye Han (left) to headline the opera. As the protagonists, their voices were beyond reproach, their sizzling chemistry even more so. Perfectly suited for the spinto role, Lee was heroic in the dramatic ‘Ah! Per l’ultima volta!’, yet lyrical in the arias ‘Non piangere, Liu’ and ‘Nessun Dorma’. His bright voice carried well through the orchestra and across the theatre, no mean feat for a tenor singing behind a veritable wall of sound.

Han, in one of the most demanding roles for a dramatic soprano, displayed seemingly endless breath support, projecting her voice clearly above the orchestra. Her first aria, ‘In questa reggia’ in Act 2 Scene 2, established Turandot’s character with a cold, steely voice that would send chills down anyone’s spine. From then on, Han traversed the registers with ease, but her most memorable turn was in ‘Che e mai di me’ and ‘del primo pianto’ with Lee in Act 3, their powerful voices edging each other to climax after feverish climax, ending in the dramatic ‘So il tuo nome!’.

As much as Alfano’s contested ending raised eyebrows even in the fictional world of opera, the final scene was splendidly majestic enough for the audience to suspend belief and, for one moment, accept that love’s ardent fire can melt even the coldest heart. The many curtain calls were well-deserved, and I look forward to the next production by the SLO and Lo King-man.