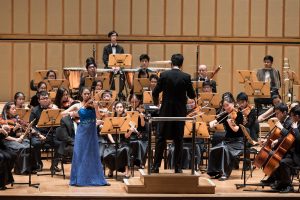 Invitation to the Dance

No stranger to the Esplanade, the Singapore National Youth Orchestra has come under the management of the Singapore Symphony Orchestra since April last year. The SNYO continually strive to inspire love for music to both performers and patrons alike.

Performed first was the title piece of this dance-inspired concert. In Berlioz’s orchestration of Weber’s Invitation to the Dance, he employs the cello and higher woodwinds to play the roles of the dancers. Lau Yun Xi, principal cellist, enticed her partner gently and romantically to the dance, which was responded to with the pleasant tone of principal clarinetist Samuel Chan, quite the 21st-century role reversal. The orchestra maintained its pulse well as the dance commenced under Dr Leonard Tan’s direction, though the energy seemed to dip upon the descending woodwind scales. Apart from slight pitch issues in the horns, the grace and delicateness of the waltz was thoroughly enjoyable.

Tchaikovsky’s Violin Concerto found itself in the hands of young Excellence Award recipient in the Youth Division of the Raffles International Violin Competition, Thong Wei Ling. From the outset, Thong played with a warm and projected tone through her extended phrases in the first solo passage. Despite missing a few bars and playing some wolf tones, Thong persisted but it was not long before she had to halt (so did the orchestra) to retune, courtesy of an errant tuning peg. Much needed encouragement from the audience later, the concerto was started over. While trying to retain her composure, Thong was perpetually ahead of the orchestra. Tan, together with the orchestra, guided her through the technically demanding first movement. Thong’s interpretation was clear in her well-prepared cadenza. She took adequate amounts of time to breathe in between her pizzicatos and double-stops while still keeping the intensity in the music.

Thong appeared much more assured and in control of the Canzonetta. In spite of the rocky start to the concerto, which made her take a step back, Thong courageously picked herself up with fine musicianship and her soloist status was reinstated in the second movement. She demonstrated sensitivity and lyricism in the G-minor melody. The SNYO dived into the Finale with the solo violin exhibiting resonance, particularly in the lower registers. The orchestra kept strictly to Tan’s beat through to the final bars. Thong’s courage and fortitude was admirable. Harbouring much potential, she is capable of a virtuoso performance with time. 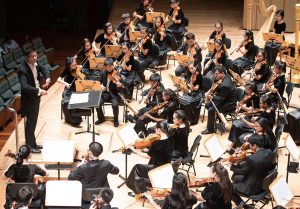 Before he started Beethoven’s 7th Symphony, Tan highlighted certain key points in the symphony, emphasising Beethoven’s juxtaposition of dynamics which were well-executed by the orchestra throughout the symphony. Tan drove the first movement along nicely by articulating Beethoven’s dotted rhythms, with fluid transitions at the key modulations. Regrettably, some tutti sections saw the strings and timpani overpowering the back row of winds. Tan did not wait long to start the contrasting A-minor Allegretto, whose second melody was exquisitely executed throughout the orchestra. The only setback was perhaps the constant tendency to rush the second-beat quavers in the ostinato, despite an already faster than usual tempo.

Probably the most well performed movement, the scherzo surged with energy, from the high woodwinds down to the double basses. The orchestra played vivaciously, with much attention to key features in the winds distinctly brought out. The final movement, dubbed by Richard Wagner as ‘the apotheosis of the dance’, saw Tan pointing to his ear multiple times. The winds had displayed an unfortunate lapse in pitch. Nevertheless, there was vigour and brilliance in the tremolos leading up to an exhilarating ending. It was evident that the young musicians revelled in playing Beethoven’s 7th Symphony.