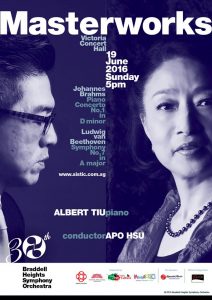 More than just beating time in front of an orchestra, a conductor determines the success of a performance by bringing the musicians in and out of proverbial musical hoops. A satisfying concert is often the combined result of gruelling rehearsals and an astute orchestral leader. Under the Maestra Apo Hsu’s accomplished direction, and with her knowledge and passion for music, the Braddell Heights Symphony Orchestra (BHSO) rose to give a heady performance that was certainly their finest that I have heard.

German composers Beethoven and Brahms are canonical figures in Western music, their works ubiquitous and instantly recognisable. Even so, Hsu’s unique style and detailed handling of such standard repertoire is gratifyingly refreshing. Contrasting warm strings with nimble one-per-part winds on the background of hunting horns, the first movement of Beethoven’s Seventh Symphony poco sostenuto – vivace was dramatic without sacrificing clarity of line. Under Hsu’s direction, the orchestra’s tonal balance was perfect for Beethoven – a Viennese master at the height of his powers, writing music that was stylish and cutting-edge for the times – which the BHSO played with such immediacy and suppleness tonight. 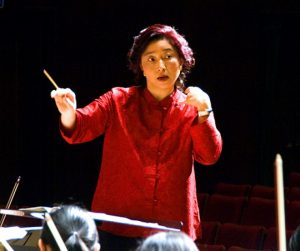 Hsu (right) directed with clear and purposeful movements of her hands and body, seemingly pushing and drawing musical ideas around in a continuous ebb and flow. The beauty and symmetry of this yin-yang balance gave shape and elegance to the second movement Allegretto, propelling it forward with a rhythmic thrust that turned heroic at the climax. In contrast, the Presto was playful and buoyant, while the final movement Allegro con brio, with its mercurial mood changes suitably handled, concluded the first half on a spirited note. In Hsu’s hands, Beethoven was not the gruff misunderstood genius history made him out to be, but a noble and refined creative spark. 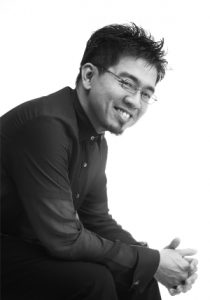 The technical demands required from soloist and orchestra, as well as the fine balance needed between monumentality and intimacy in Brahms’ First piano concerto makes this one of the more difficult to perform, but a gem to behold when done well. An unfortunate lapse in control left the concerto’s orchestral introduction unguarded and harsh, with the strings and tympani struggling to find their way into Brahms’ darker, stormier brew, borne of his grief at Schumann’s illness and death. Thankfully, the orchestra found its footing a minute or two in, and by the time the soloist entered, the fine balance displayed earlier in the evening had returned.

Pianist Albert Tiu’s entry after the opening orchestral maelstrom was straight-laced and he negotiated the virtuosic passages with confidence and verve, however I wish he had found more tenderness and nuance in the tragic passages. Hsu tackled this concerto with less Romantic liberty than may be expected, but this was a valid interpretation considering the movement’s Classical sonata roots.

Hsu and Tiu ensured that balance and conversation between soloist and orchestra were maintained throughout, and Tiu was sensitive and meditative in the Adagio second movement, which the composer prefaced with the proclamation ‘Benedictus qui venit in nomine Dominus’ (‘Blessed are those who come in the name of the Lord’). He dispelled the languid mood abruptly with his attacca entry into the Rondo: allegro non troppo, an effect that heightened the movement’s drama and vitality. Hsu caught up without so much as batting an eyelid, and the movement was taken at a sprightly tempo. The numerous steep cliffs and plunging ravines of this movement were written for the composer’s own virtuoso fingers, and Tiu did not disappoint, bringing the audience through a multitude of colours and moods. His playing, while not the most nuanced, was consistently lively, and he tamed the fingerwork well.

This was a memorable concert: in addition to an exquisite Beethoven, we learned that with adequate guidance, a homegrown, community orchestra could rise to the occasion and give a performance par excellence. Kudos to Maestra Apo Hsu who inspired both the performers and the audience, and shared with us a precious evening even more worth the price of admission than professional orchestras. I hope the BHSO has assimilated what they have learned under her and continues to play with the same rigorous attention; the highlight of this year is no doubt Carl Orff’s Carmina Burana with the Joy Chorale, on 18 December. We wait with bated breath.