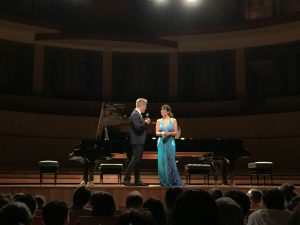 MOZART – BUSONI: Duettino Concertante (based on the finale of the Piano Concerto in F major, K.459)

RACHMANINOFF: Suite No.1 (Fantaisie-tableaux) for Two Pianos, Op.5
i. Bacarolle
ii. The Night… The Love
iii. The Tears
iv. Easter

(If you have not been properly introduced to the piano duo Anderson & Roe, read here for our interview with them!)

Promising a piping-hot night with an ‘unhealthy dose of adrenaline, 2 – 4 servings of sexual tension, and a dash of the unexpected’, the anticipation was palpable in the Esplanade Concert Hall even before pianists Greg Anderson and Elizabeth Joy Roe — as piano duo Anderson & Roe — took the stage. The effect was somewhat undermined by the teenager next to me announcing to his friend, “the only other time I was here [in this concert hall]… I can’t remember why. I think I was with my mum for some event.” But that was just the whole point of Anderson & Roe’s musical mission: by introducing what is generally referred to as ‘classical music’ to the wider public at large, who may not have appreciated this kind of music before, the duo is living up to their musical mission ‘to make classical music a relevant and powerful force in society‘. Through the varied music of their programme, they entertained and educated the audience, peppered with anecdotes and animated banter. 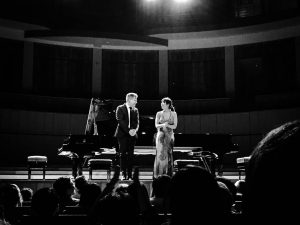 The duo (left) could have played out a journey of star-crossed lovers with their programme. They meet for the first time at a debutante ball, all light-hearted fluff and chaste blushing, to the tune of Busoni’s two-piano Duettino Concertante based on Mozart’s Piano Concerto in F major. Even in the Mozartian frivolity and naïvete, the pair was already comfortable in their synchronicity, like love at first sight, and oftentimes one cannot tell which part is played by whom, without actually looking at them.

Courtship starts proper with Suite No.1, a set of two-piano pieces written by a young Rachmaninoff in the twilight years of Tsarist Russia. The duo strolled languidly through palace hallways, full of imperial grandeur and exotic opulence: the Bacarolle cocooned the hall in thick brocades of luxurious silk and gilt gold, with Anderson leading the tenor line filled with yearning for home and hearth. La Nuit… L’amour… (The Night… The Love…) became a forbidden rendezvous in a moonlit garden, suffused with the perfume of roses, punctuated by the calls of night birds. As their declarations of love swelled to a climax, Les Larmes (The Tears) fall, an ostinato that broadened from a simple four notes to drown the audience in relentless showers of sorrow and melancholy. Easter was a joyous cacophony of bells tolling during the festival, and throughout the four pieces the duo made good the subtitle of the set, ‘Fantaisie-tableaux’, by bringing the audience a pictorialisation of four poems that stimulated all five senses with music alone.

The pair next go to a ball, where Ravel’s La Valse variously called up and deconstructed the Viennese waltz in start-stop pastiches. Here the build-up was slow but steady, stretching the lyrical romanticism with scintillating flourishes, leading up to a rambunctious stomp, and I was certain the Steinways positively growled at the climax. The multitude of sparkling coloured light, smoke and mirrors in the duo’s playing rivalled the best in piano duos.

Fleeing the ballroom, the pair stepped into a steamy bordello in Argentina, bringing to mind a similar scene in the movie ‘Dirty Dancing (1987)’. The duo danced to three Piazzolla tangos, starting with the delightful Primavera Porteña and closing with the popular Libertango, where some non-traditional effects were introduced, like ‘preparing’ the piano wires and tapping and knocking on the wooden panels. The aspect of A+R’s duo-playing that is most different from traditional piano duos, however, is in the visual impact of their performance: Anderson and Roe not only sit next to each other, but they also stand, saunter, and lean in with a suggestive cant to the hips. Like actual tango dancers but on a smaller scale, the duo danced with their hands and bodies on and around the keyboard, fingers interweaving and not-quite-touching, all sultry looks and heated almost-kisses. In fact, the darkly sprawling Oblivion was my favourite, with sensual undertones brimming in the shadows, the sexual tension culminating in a musical la petite mort, two hearts finally beating as one. If the music got any more erotic, this would be the first classical music concert in Singapore to have gotten an ‘NC16’-rating! Anderson & Roe were definitely not exaggerating with their “sex and adrenaline” claim.

After all that courting and dancing, the lovers finally get married. As Anderson & Roe explained, ‘What A Wonderful World’ is frequently played at weddings, and here they gave the classic ballad an almost delicate, romantic makeover with an understated elegance and a touch of class. And then, kids come after marriage, and we know what the kids want (and adults, too): the Three Star Wars Fantasies are really symphonic fantasies in the spirit of Franz Liszt’s opera paraphrases, quoting snatches of themes from John Williams’ beloved soundtrack score within the bigger schemes of a rag, a minimalistic nocturne, and a toccata. The ‘Ragtime’ in the style of Art Tatum, based mostly off the quirky Cantina Band theme, is sure to become a fan and pianist favourite. The technical difficulties of this set — especially in the hyperbolic ‘Toccata’ — may be the main obstacle to its widespread performance, but naturally that is not a problem for the virtuosic twosome. Just as Liszt made ladies swoon in his time, Anderson & Roe had the audience clamouring for more after their very exhilarating and fun programme.

For encores, Anderson & Roe offered three new arrangements: ‘Mambo’ from Bernstein’s West Side Story, which was just uploaded onto the duo’s YouTube channel a couple of weeks ago, had the audience shouting with the wild syncopation. Brahms’ Hungarian Dance No.5 was embellished with a measure of quaint melodies and unexpected harmonies. Finally, the Beatles’ Let It Be was transformed into a bluesy gospel hymn, and in light of recent world events, this was a timely reminder that even if music does not physically solve problems, it gives us all hope and light in a time of darkness

‘And when the night is cloudy
There is still a light that shines on me
Shine on until tomorrow, let it be.’

Interview: Anderson and Roe speak to The Flying Inkpot about ‘The Forte Awakens’