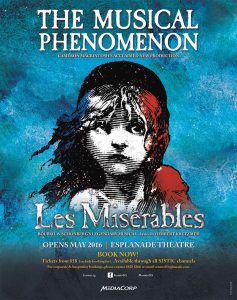 Set and Image Design by MATT KINLEY, inspired by the paintings of VICTOR HUGO 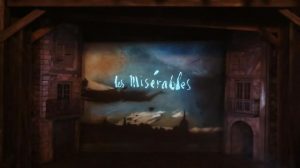 Thirty years ago, nobody could have predicted that a musical adapted from a thousand-page French novel, set amid a student rebellion and where most of the major characters are dead by the end, would sweep the world by storm and become one of the most popular and beloved musicals of our time. As it is, Les Misérables is now the longest current running musical in the world since it opened in London in 1985, where the original production is still playing at Queen’s Theatre. More than that, it has been hailed as a timeless tale of humanity, compassion, redemption, brotherhood, and love; where everyone scrapes by in impossible times, some less dignified than others, but in the end the audience emerges with a sense of hope and triumph over adversity. That is the draw of Les Misérables, and Schönberg’s music fully exploits the varied emotions and depths inherent in the story.

For the musical’s 30th anniversary, producer Cameron Mackintosh has restaged the musical in an entirely new production, having premiered at Her Majesty’s Theatre, Melbourne, in July 2014. Employing cast and crew from Australia and Britain, this is the production that is currently touring Asia. Those familiar with the musical will recognise fan-favourite sets, like the bullock cart, Thénardier’s inn, the Rue Plumet, the Cafe Musain, and the pièce de résistance of any Les Misérables production — the barricade. In addition, projection technology is used to fill in where traditional sets would have been less than ideal: Javert’s suicide, for example, is particularly realistic and effective. The stage designers have also drawn inspiration from Victor Hugo’s own paintings as backdrops, most of them dark and sombre, but eerily evocative of the times in which the story is set.

This production is all raw singing muscles and theatrical sinew, and often the only prop is just a spotlight or a piece of furniture, focusing all attention on the music and the cast. Tight pacing and seamless scene changes create and intensify an atmosphere where all excess is whittled away, and the result is sometimes as stark and as gritty as the thematic material allows. The music, too, has been re-orchestrated to give a heightened sense of drama, but since all the original musical material is intact, there is no discomfiting realisation that the music has changed in any way.

The quality of the cast is as good as we can get outside Broadway or West End. Unlike some of the recorded concert versions (including the 2012 Hollywood movie), there are no international big names except Gleeson and Carpenter, but neither are there any weak links. Everyone is able to hold their own, with ensemble numbers especially rousing thanks to effective choreography and a very dense choral effect. Perhaps some of the high notes needed greater breath support, and I had wished for better balance between Eponine, Cosette and Marius in ‘A Heart Full of Love’. But this was only the second performance of the six-week run, and I am sure these details will be ironed out very soon.

There were many spine-chilling moments too. Without giving away too much, watch for Grantaire’s powerful turn in ‘Drink With Me’, contrasting his moody nihilism with the idealistic camaraderie of the others; a despondent Marius in ‘Empty Chairs At Empty Tables’; a broken Eponine in ‘A Little Fall of Rain’. I even cried a little when the spirits of Fantine and Eponine came to collect Valjean’s soul (I wasn’t joking about everyone dying). Special effects and pyrotechnics aplenty round out a satisfyingly heartrending performance.

This “new production” of Les Misérables is not so much a fresh new look, but rather a staging of a musical that has evolved and matured over the past three decades. The entire production has been honed to an intense three hours, with an energy that is really beyond what could be gleaned off the screen or even from audio recordings. There is something to be said for experiencing this musical ‘live’ — explaining why audiences return again and again to live musical theatre, even with so many official recordings out on the market — and everyone, including fans new and old, can look forward to an exciting evening filled with tears and adrenaline. Get your tickets now!