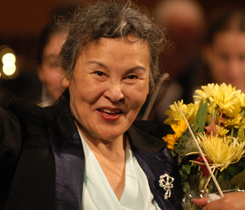 To celebrate Chinese New Year with the Singapore Symphony Orchestra, 86-year-old guest conductor Zheng Xiao Ying (left) showcased an evening of East-meets-West fusion. Western classical music was introduced to China only about 100 years ago, and was even banned outright during the Cultural Revolution from 1966-76, but before and after that, Chinese composers were quick to learn and assimilate the foreign styles with their own traditional music to create a unique body of work that continues to grow today.

Zheng is one of the founding Western symphonic and opera conductors in China, having graduated from China’s Central Conservatory of Music and then the National Moscow Conservatory of Music. Her familiarity with both sides of the cultural divide was evident in her expert handling of the symphony orchestra, drawing alternately delicate and bold Oriental melodies from the Western tonal palette. Despite her age, she continues to tirelessly promote Chinese symphonic works to the world. The opening piece, ‘Spring Festival Overture’ is one of the most familiar pieces, heard every year during Chinese New Year celebrations all over the world, but with her flair for drama, Zheng introduced an unexpected change in tempo that transformed a village celebration into a triumphal march of joy.

The next piece, a tone poem, ‘A Tone Picture of Border Village’ by Xu Zhen Min (b.1934) started with evocative horn and wind solos before introducing lush strings and harp glissandi, painting a impressionist picture of Southern China, famous for its picturesque forests and lakes. An irregularly metered middle section highlighted folk dances with a more contemporary stylistic twist. Very imaginatively scored, the SSO certainly showed an affinity for the idiom, and a repeat performance must surely be in the works!

In contrast to Xu, whose career was based mostly in China, the younger Huang Ruo (b. 1976) is part of a new generation of Chinese composers and musicians at home both in China and abroad. Born in Hainan, he studied at Oberlin, then Juilliard and now calls New York home. Between 2015 and 2016, he was invited to be the first-ever composer-in-residence at the Concertgebouw. Despite his Western outlook, Huang explained that Chinese culture is in his blood and forms part of who he is, even if he does not consciously think about it. ‘Folk Songs for Orchestra’ is a suite from three different regions in China, each with a distinctive style. The trumpet solo could have projected more in familiar ‘Fengyang Flower Drum Song’, but the rest of the orchestra rounded up the piece with vigour. ‘Love Song from Kang Ding’, a region bordering Tibet, took a more pensive and melancholic turn, while ‘The Girl from Da Ban’ is a boisterous whirligig of an Xiajiang Uyghur song that posed some difficulty for the orchestra in terms of ensemble playing, losing a bit of the breathless build-up to the climax. 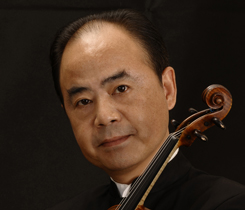 The ‘Butterfly Lovers’ violin concerto needs no introduction. Few other major Chinese compositions in the Western symphonic medium have attained its popularity and reach. Right from the opening solo, violinist Kong Zhao Hui (right) took control of the music, his mastery over the musical material and form allowing him a wide berth on which to take artistic liberties, all in good taste. His narrative never strayed far from anguish and sorrow, as the violin told the story of the star-crossed lovers separated and doomed to death, only to be reunited in the afterlife as a pair of butterflies — China’s Romeo and Juliet. Kong’s sound was always beautiful and elegant. Coupled with a lively theatrical delivery, he landed an awe-inspiring and flawless performance. The orchestra and instrumental soloists were equally effective in their handling of several special effects and techniques taken from Chinese opera; worthy of mention is the ravishing duet between Kong and SSO’s principal cellist Ng Pei-Sian, who played the role of Liang in sunny counterpoint to Kong’s willowy Zhu.

‘Liang Xiao’ is a simple, pleasant tune originally written for erhu solo (a two-stringed fiddle) in the style of a Chinese operatic aria, here orchestrated for first violins with the rest of the orchestra accompanying pizzicato. At the time of composition in 1928, Western music was still in its infancy in China, hence the musical ‘fit’ was skewed far towards Chinese opera; I could not help but think that a greater understanding of the latter might have served the piece better, but perhaps that would be too much to ask of a Western orchestra.

In contrast, the SSO had no problems conjuring up images of the deserts, steppes and nomadic tribes of Xinjiang in the final work, ‘Sainaim Rhapsody’ by Chen Le-Chang. Based on the Twelve Muqams of the Uyghur people of Xinjiang, which developed from first-century melodies of the region, the piece is influenced by the Arabic maqam modal system. Rich in Persian flavour thanks to the Silk Road and neighbouring Central Asia, the Uyghur Muqams were designated an Intangible Heritage of Humanity by UNESCO in 2005. A piccolo choir in combination with harp and celesta played a chirpy, exotic foil to the nostalgic, poignant melodies of the cor anglais (played wonderfully by Elaine Yeo). Ethnic drums and a lilting rhythm on the strings gave way to a raucous set of dances that clearly painted a picture of tribal youth decked out in their colourful costumes, singing and dancing around a bonfire!

In just one evening, Zheng introduced to us a veritable embarrassment of riches written by Chinese composers in the past century for the Western orchestral medium. Even as it would be remiss of ethnic Chinese musicians not to promote this treasure trove of repertoire that is on par with Western compositions, the world at large would be a poorer place if these continued to be hidden behind the bamboo curtain. I, for one, am immensely grateful to Maestro Zheng Xiao Ying for this incredible opportunity to share her life’s mission with us in Singapore.