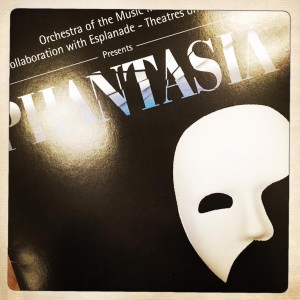 It’s no mean feat to sell out a classical music concert in Singapore, so it speaks volumes about the Orchestra of the Music-Maker’s (OMM) outreach efforts (and programming) that it managed to not only sell out all the seats in the main body of the Esplanade Concert Hall but also the choir seats, plus twenty on-stage itself. Just before the concert, I overheard an elderly couple at the ticket collection booth, indignant that they had to stand by for ticket returns.

The ticket prices (a very affordable $15 for anywhere at all in the hall) certainly had something to do with the box-office success of this concert, but so did, I suspect, the programming. Capitalizing on their previous success with Andrew Lloyd Webber’s Variations for cello and orchestra in 2014, the OMM returned to safe ground this year with his Phantasia. 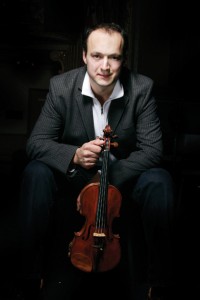 Three arrangements comprised the meat of the program. Christopher Palmer’s arrangement of La Bohème doesn’t quite rise above the prosaic and perhaps Chan Tze Law recognized this, with a slightly detached performance rather than milking the music. Despite this, the big numbers made their mark, starting with Act I. The orchestra’s jocular exchanges between Rodolfo and Marcello sparkled, as did the second Act marketplace scene. While one missed the voice in ‘Mi chiamano mimi’, oboist Seow Yibin’s elegant phrasing was a worthy stand-in, and concertmaster Chan Yoong-Han’s sweet tone was a welcome ear-teaser. Perhaps a little more fluidity would have helped in Musetta’s waltz but with such lush orchestral string sound, who’s complaining?

This was the first time I’d heard Phantasia, the afternoon’s main draw. Its main drawback is also its strength – (nearly) every single tune from Andrew Lloyd Webber’s hugely successful musical is included, and then some, in this double concerto arrangement of its music by Geoffrey Alexander. SSO section leaders Yuzefovich (right) and Ng (left) were the natural focal points of this 30 minute piece, and each had their moment in the spotlight, but the orchestra’s tight ensemble work and Chan’s attentive accompaniment provided an atmospheric backdrop for their virtuoso efforts. Starting, more or less chronologically with the auction scene with the music box (lovely mechanical feel with the glockenspiel/celesta), Alexander’s arrangement moves through such popular numbers as ‘Music of the Night’ as well as less well-known numbers such as ‘Don Juan Triumphant’. Solo parts 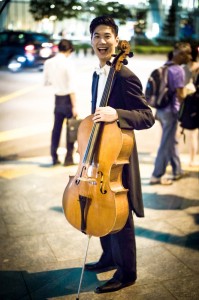 included plenty of deft finger work, upper register double stops and interwoven melodies, with Yuzefovich and Ng’s instruments blending rather nicely together and active rapport between the two. Particularly enjoyable was ‘All I Ask of You’, which was sentimental but not maudlin. The arrangement could definitely have been more artful and editing would have helped, but for ‘Phantom’ fans, this was an absolute treat and the audience responded enthusiastically.

Rodzinski’s Rosenkavalier Suite followed without the usual intermission. For all its difficulties, this provided the most enjoyment. If Quinquin’s initial conquest of the Marschallin in the overture seemed more geriatric than youthful, the horn whoops, fearlessly played here (and elsewhere, with high notes in the mix) made clear that all was well between the sheets. Generally taken at slower tempos, the ‘Presentation of the Rose’ quivered with anticipation of love at first sight, while the impassioned climaxes of the Trio and final duet were richly executed and movingly bittersweet. Grofe’s ‘Sunset’ from the Grand Canyon Suite and a rollicking bis performance of the final pages of the Suite, sealed an enjoyable afternoon.