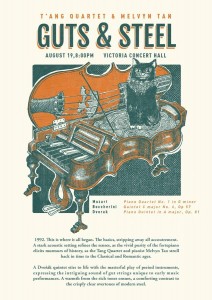 Review tickets were generously provided by the presenters of this concert

Somewhat in line with the Singapore International Festival of Arts’s (SIFA) 38th-year theme of ‘Post Empires’, the T’ang Quartet (right), who style themselves as Singapore’s Premiere Quartet, have elected to present three concerts showcasing their varied repertoire. This was the first. The notes in the stylish SIFA program booklet state that this is presented as a throwback to the past: something traditional and basic for the more conservative and orthodox.

In many senses it was, and to an extent it showed how the T’ang Quartet has departed from the traditional interpretation of what a string quartet ‘should’ be. Their guest pianist, Melvyn Tan, is a period instrument specialist who made a career in London before returning (amidst controversy) to perform in Singapore. With Melvyn Tan performing on his fortepiano and the rest on gut strings, the original balance of the piano vs strings in Mozart’s era was preserved, lending transparency and beauty, if less brilliance, to the sound. The fortepiano had a lovely limpid tone with a particularly dark lower range. 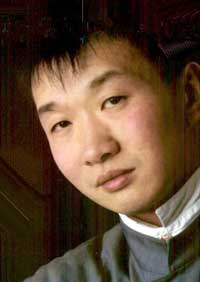 In chamber music, all participants are equals, but here, Melvyn Tan (left) dominated in the Mozart, with the quartet (sans first violinist Ng Yu-Ying) putting up a ‘straight’, self-effacing performance, with very few agogic tempo changes in this Classical reading. Perhaps they were concerned that tuning issues would arise on the temperamental gut strings with more vigorous playing. In any case, this approach revealed another dimension of the quartet – as what a piano quartet reduction of a Mozart piano concerto might have sounded like. Taken less dramatically than is usual with modern instruments, it gave us an opportunity to listen to Melvyn Tan’s quietly refined musicianship, with the pianist sparkling in rippling scales, playing it up in his solo passages but blending well with the strings elsewhere.

First violinist Ng Yu-Ying joined for the rest of the concert, and the difference was evident, with clear-headed leadership and dialogue clearly shown between the quartet and Melvyn Tan, in addition to the Ng’s more brilliant tone. The predominantly cheerful Boccherini Piano Quintet (he wrote 12!) allowed many more opportunities for virtuoso display and the sunny disposition of the music came through in the boisterous performance. Particularly expressive was Lionel Tan’s viola in the theme and variations third movement. Only the last movement felt a little too buttoned up in what is meant to be fun music to play.

After the composer’s neglect of the cello in the Mozart and the second violin in the Boccherini, the performance of the Dvořák, this time with the modern steel strings and concert grand, felt as if caged animals had just been let loose, with much more expressive force and athleticism. All solo contributions registered, with Leslie Tan’s quietly making its mark. The quintet brought out the Brahmsian qualities of the work nicely, bringing up a particularly energetic first movement coda.  Elsewhere, they could have kept things more interesting by moving the tempo along at times, for example in the second movement Dumka, where despite the beautiful sound produced, tension lagged and ensemble issues in the contrasting fast sections ensued. Melvyn Tan turned in a stylish and attentive performance, showing himself capable of thundering where needed, aided by the piano’s lid being opened nearly fully. Not at all lacking tension was the furiant Scherzo, which bristled with energy, though not taken as breathless a pace as some, as did the sensitively-played polonaise Finale.

Taken as an occasional foray of a quartet more used to playing modern repertoire, into firmly ‘conservative’ and ‘orthodox’ repertory, it satisfied; however there was a sense that the classical repertoire fitted them less than their performances of contemporary works, which is a pity, because the classical repertoire, though arguably more conservative, has its riches,  May future performances show more, ahem, guts.